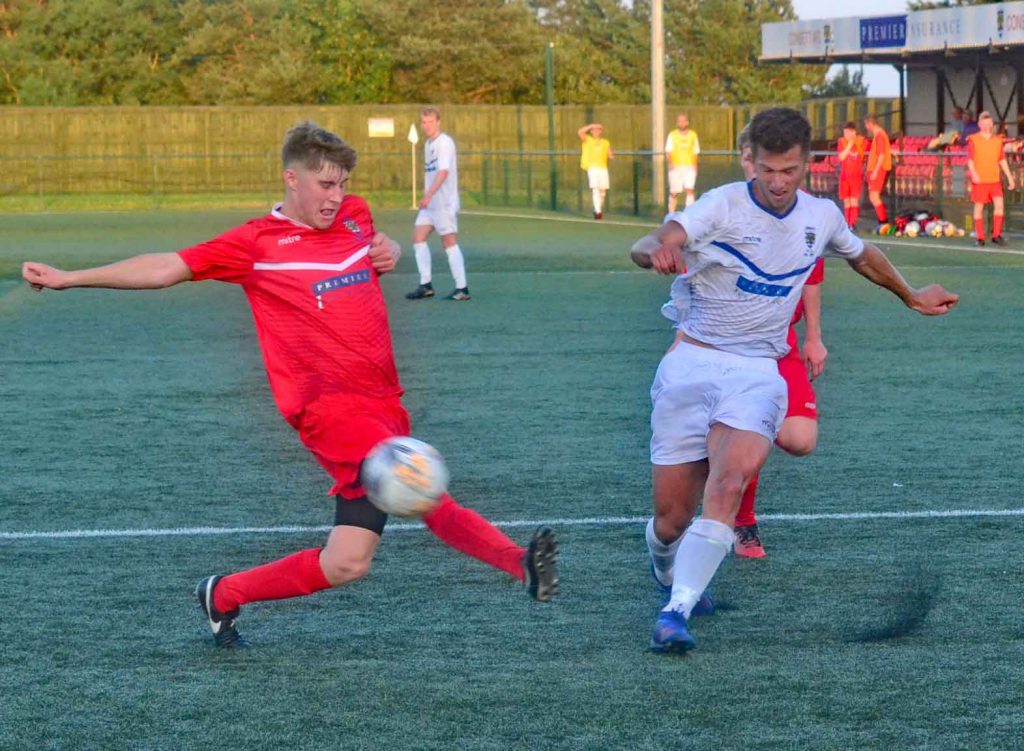 Consett’s first team showed the club’s young reserves their ruthless side as they made their fitness and strength count in a crushing friendly defeat at Belle View.

The Reserves – most of whom were playing at under-18s level last season – stepped in to play Terry Mitchell’s side after scheduled opponents Tow Law pulled out at the last minute.

And though the second string – who as Consett Chiefs won the Russell Foster Youth League U18s Premier Division last season – matched the seniors until almost half time, two quickfire bursts of goals left them on the wrong end of a 10-0 defeat.

The youngsters acquitted themselves well in the first half, competing for every ball, and holding their shape well, and when the seniors did break through they found 16-year-old keeper Ethan Bridge – playing his first game – in excellent form.

It took until the 42nd minute, to make the breakthrough, and when they did it was two of the first XI’s most experienced players who combined, Arjun Purewal heading powerfully home at the back post from Calvin Smith’s cross.

A minute later it was 2-0, as Andrei-Vasile Ardelean caught  a defender dawdling in possession on the edge of his six-yard box, and poked the ball home. And before the referee blew his whistle for half-time it was three, as Ardelean cut in from the left and put a low shot across the keeper into the far corner.

The Reserves recovered their composure at the start of the second half, and to their credit tried to keeping playing football, but a fourth goal seemed to knock the stuffing out of them in the 58th minute when Ardelean fired in off the bar to complete his hat-trick.

Four minutes later Calvin Smith planted a perfect free-kick into the bottom corner to make it 5-0, and on 65 minutes Ardelean turned provider, laying the ball into the path of Ali Alshabeeb, whose crisp finish made it six.

Three goals in five minutes then gave the scoreline a brutal look, as young heads starts to drop and limbs started to tire against their physically-stronger opponents.

Smith’s sliderule pass gave a trialist the opportunity to slot home on 76 minutes, Max Russell fired into the bottom corner after a solo run on 78, and Smith smashed an unstoppable shot into the top corner from Alshabeeb’s pullback on 80.

The final goal came in the 83rd minute, when Russell’s run and pass left Alshabeeb with only the keeper to beat, and he made no mistake, for a final score of 10-0.

Consett’s final pre-season match is on Saturday 27 July when they entertain Morpeth Town, who won the Northern Premier League Division One East last season. Kick-off at Belle View is 3pm.