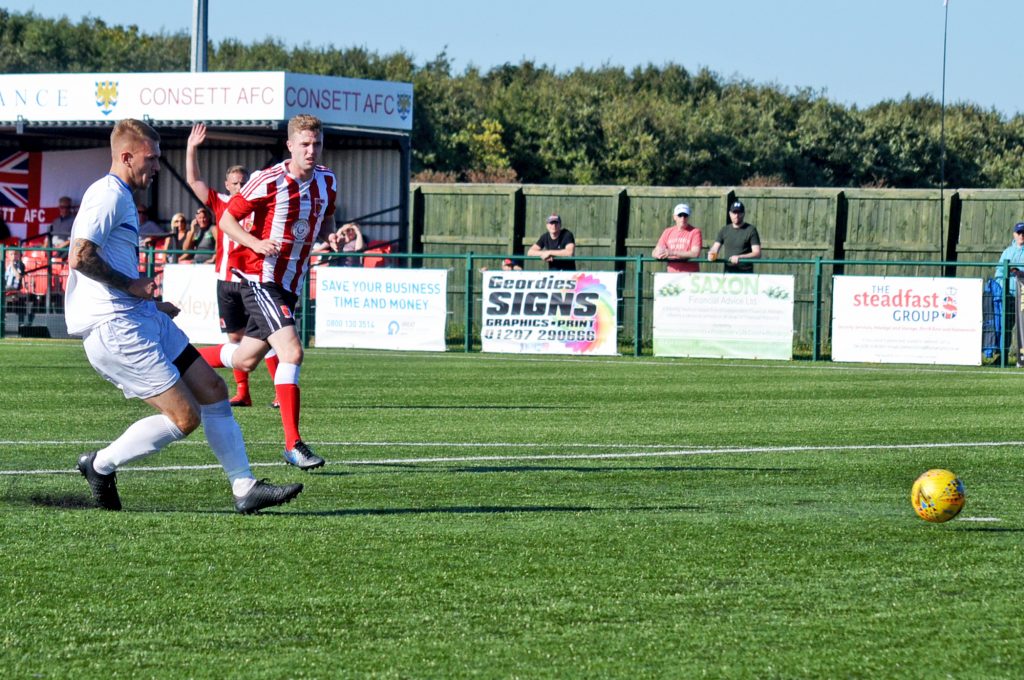 Dale Pearson scored his third double in four games as Consett beat Sunderland RCA 3-1 at a sunny Belle View today to go second in the league.

The in-form striker got the Steelmen off to an ideal start, putting them in front after just eight minutes after being played in by Ali Alshabeeb.

After Alshabeeb and Calvin Smith had chances to double the lead, Pearson made it 2-0 in the 18th minute, pictured, finishing confidently from another Alshabeeb pass.

The big No 9 had a couple of chances to score a quickfire hat-trick, but blazed one wide while off balance and was denied by RCA keeper Robert Dean in a one-on-one.

Consett seemed to create chances at will in the first half, and went in 3-0 up after Luke Carr put the finishing touch to an excellent cross from Jermaine Metz a minute before the break.

RCA stepped up their game in the second half, but Consett still created a hatful of chances to run up a handsome scoreline.

That they didn’t was down to a combination of wasteful finishing and an excellent performance by Dean, who denied Pearson, Alshabeeb, Andrei-Vasile Ardelean and Jake Stafford with a string of saves.

RCA grabbed a consolation goal in the 89th minute through Dylan Elliott after good work by Ryan Leonard, but after Consett’s first-half display there was never going to be any doubt over which side took the three points.