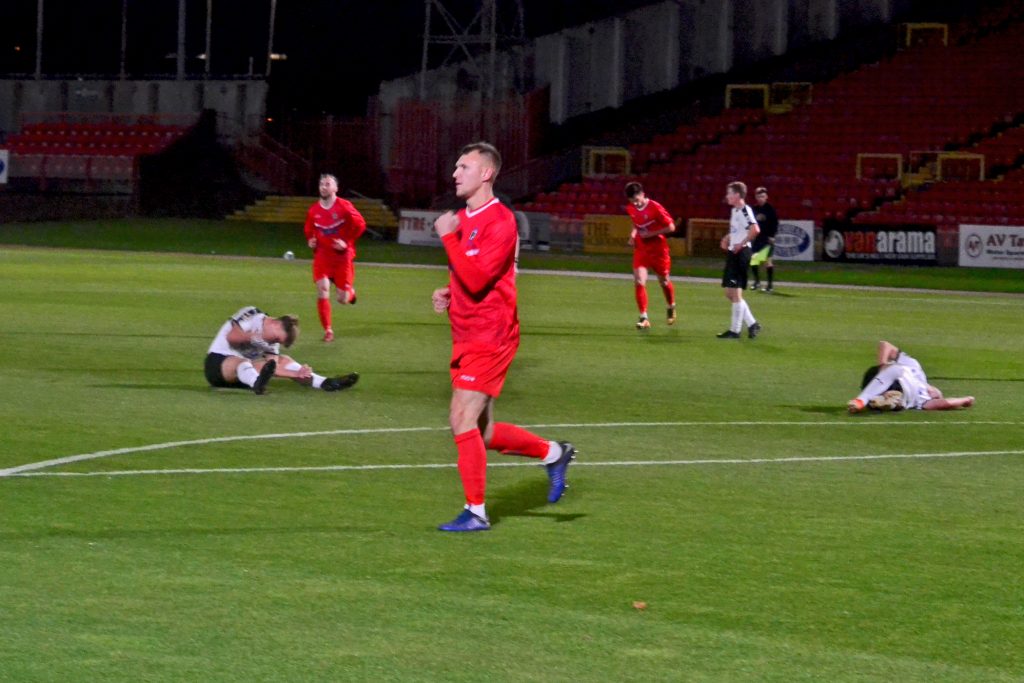 Consett were involved in a rollercoaster ride of a game at Gateshead in the Durham Challenge Cup tonight, before running out 5-4 winners to claim a place in the next round.

The Steelmen fell behind early on, turned the game on its head with four goals in six minutes, and seemed to be home and dry when Dale Pearson completed his first hat-trick for the club to make it 5-1 early in the second half.

But Gateshead, whose side contained five first teamers, staged a superb recovery to get the score back to 5-4, and Consett had to defend for their lives in the closing stages to secure their passage to the 2nd Round.

It was the Tynesiders who opened the scoring at the International Stadium when Consett gave the ball away cheaply in the 9th minute, and No 9 Paul Blackett ran on to skipper Connor Oliver’s pass to finish into the corner.

Two minutes later it was 1-1 as left-back Darren Holden burst into the box, and his shot had just enough on it to beat ex-Steelman Sam Guthrie in the Gateshead goal, and a defender’s last-ditch attempt to clear off the line.

A minute later the visitors were ahead as Dale Pearson took advantage of a collision between two home defenders to run through and slot past Guthrie for his 14th goal of the season.

The 13th minute was to prove unlucky for Gateshead too, as Jake Orrell chased Calvin Smith’s pass into the box, dispossessed a defender, and fired past Guthrie to make it 3-1.

And in the 16th minute the crowd of 211 was left blinking in disbelief when Consett went 4-1 up, after a stunning goal by Pearson. He received the ball from a long throw by Jermaine Metz, looked up, saw Guthrie off his line, and lobbed him from 25 yards.

Consett were rampant, but Gateshead managed to compose themselves, and got to half-time without conceding again.

But in the 52nd minute it was 5-1 when superb work by Metz down the right saw him pick out Pearson, whose first-time shot completed his hat-trick, and gave him his 16th Consett goal in his last 13 games.

Pearson and Orrell were replaced by Ali Alshabeeb and Michael Brown as, with the tie seemingly won, Consett took the opportunity to rest them ahead of Saturday’s game against league leaders Hebburn.

But the newcomers hadn’t had time to settle into the game when Gateshead reduced the arrears through Luke Brown in the 63rd minute, the ball bouncing in off the No 7 after Kyle Hayes had saved Blackett’s initial effort.

In the 72nd minute it was 5-3 when Jordan Preston played Blackett in, and the striker grabbed his second goal of the night. Gateshead sensed that Consett were tiring, and in the 84th minute Blackett completed his hat-trick to make it 5-4, and make the last few minutes edge-of-your-seat stuff.

Two minutes from time the Heed thought they should have had a penalty when Blackett went down under challenge from Ryan McKinnon, who was making his seasonal debut as a sub, but to Consett’s relief the referee waved away the claims, and the Steelmen hung on to progress to the next round.