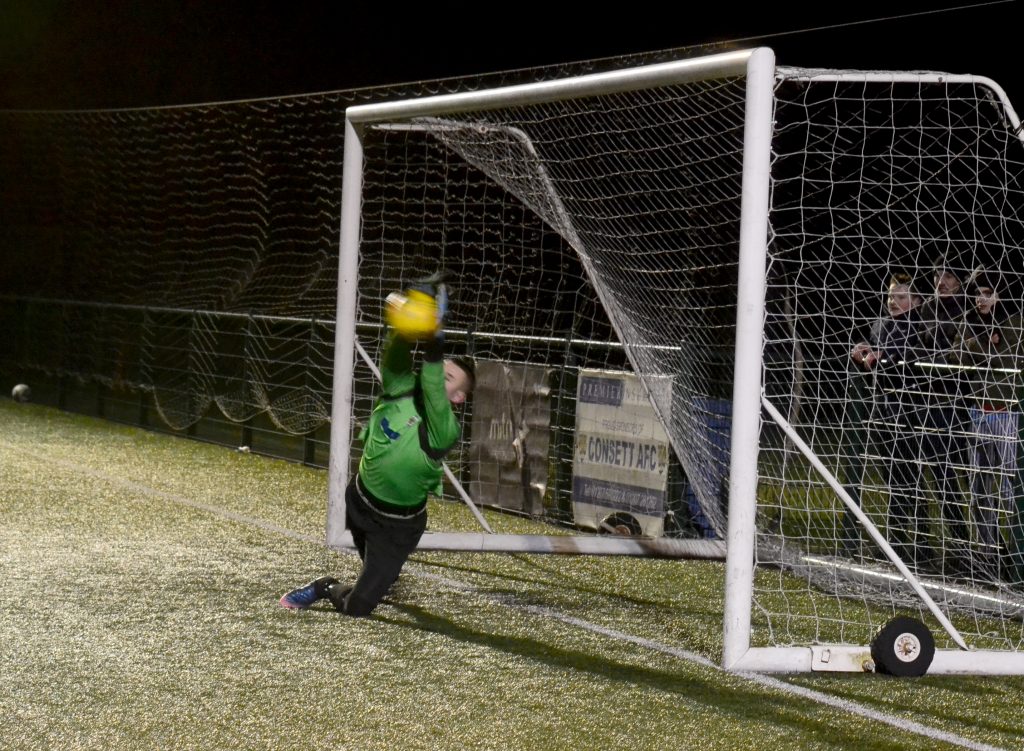 Goalkeeper Kyle Hayes was Consett’s hero tonight as they won a penalty shootout against Whitley Bay to take their place in the last eight of the Brooks Mileson Memorial League Cup.

The Steelmen raced into a 3-0 first-half lead, but the visitors scored twice in the closing minutes to make the score 3-3 at full-time, and take the tie to penalties.

But with their shootout defeat at Seaham Red Star in the Durham Challenge Cup last week still fresh in their mind, Consett held their nerve to win this one 9-8, with Hayes scoring a sudden death kick and saving the decisive 20th penalty.

No one could have predicted such a dramatic finale when Consett went into a commanding lead in the first half, despite kicking into a strong wind.

Michael Mackay gave them the lead in the 17th minute, firing home from Darren Holden’s pullback, pictured below, and the veteran striker put them in control five minutes later with a second goal after Whitley keeper Dan Lister saved Jermaine Metz’s initial effort.

When Bay defender Luke Taylor sliced the ball past his own keeper as he tried to clear Thomas McAloon’s cross in the 37th minute, Consett looked to have one foot in the quarter-finals.

But James Martin had other ideas, firing a stunning long distance effort into the top corner four minutes before the break to give the visitors a lifeline and make the half-time score 3-1.

Consett had several chances in the second half to make the game safe, but missed them all, so only had themselves to blame when, after a spirited Whitley Bay comeback, Luke Salmon made it 3-2 in a goalmouth scramble in the 89th minute, and Andre Bennett found an equaliser in the final minute to make it 3-3.

So to penalties for the second midweek game in a row, with Consett shooting first, and again the pendulum seemed to swing against them when McAloon put their third kick over the bar.

Whitley scored their first four, and needed goalkeeper Dan Lister to score their fifth to win the shootout, but to Consett’s relief he smashed the ball over the bar.

Into sudden death, Hayes scored Consett’s first kick, and on it went, kick for kick, until Max Russell made it 9-8 to the home side, and Hayes dived to his left to keep out Scott Lowery’s penalty, pictured top, and win the game.

A dramatic way to end the night then, and in the end the better team won, but the result should have been out of sight long before Whitley’s late, late comeback.