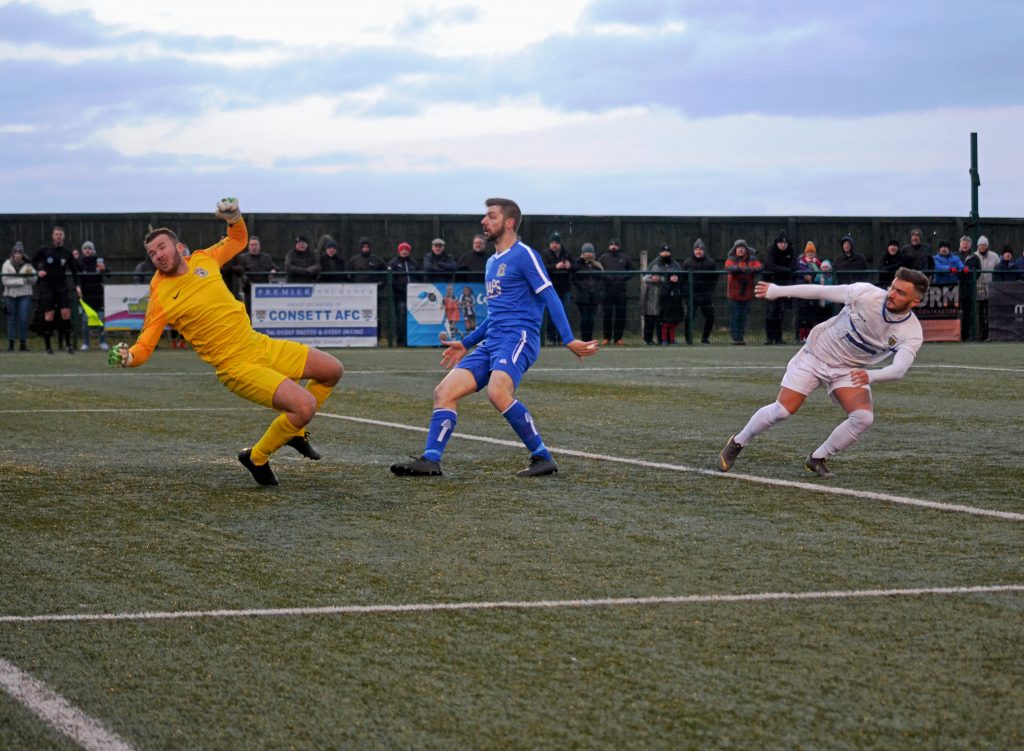 Consett made a piece of club history today by beating Deal Town 2-0 at Belle View Stadium to make the quarter-finals of the FA Vase for the first time.

Both sides had chances in an evenly-matched first half, with the best on 36 minutes, when a great pass by Dean Briggs put Ali Alshabeeb in on goal, but his effort from a tight angle was saved by Deal keeper James Tonkin with his feet.

Half-time was reached with the score 0-0, but the Steelmen stepped things up a gear in the second half against a Deal team who were defending superbly.

The breakthrough came in the 76th minute, when Alshabeeb’s ball into the box found Luke Carr eight yards out, and the midfielder lifted the ball over Tonkin to open the scoring, pictured top.

The second goal, which clinched the win, came on 85 minutes, and this time Carr was the provider, with his right-wing corner picking out skipper Arjun Purewal, who buried a header past Tonkin, pictured below.

Consett thought they had a third in the 90th minute when Dale Pearson fired home from Carr’s through ball, but his joy was short-lived as the linesman’s flag ruled him offside.

It didn’t matter, as the Steelmen were well worth the win which took them into the last eight of a national cup for the first time in their history in front of a bumper crowd of 866 – a record for a competitive game at Belle View.

It was also a good day for Consett lad, Luke Sullivan, as he scored the extra-time winner which took fellow Northern League side Hebburn Town into the last eight as they won 1-0 at Longridge Town.

There was to be no league treble, however, as West Auckland lost 2-1 at Plymouth Parkway, despite a goal from Arj’s brother Amar.

Now we can’t wait for Monday’s quarter-final draw, when Consett and Hebburn will be hoping to avoid each other and keep alive the dream of an all-Northern League final.