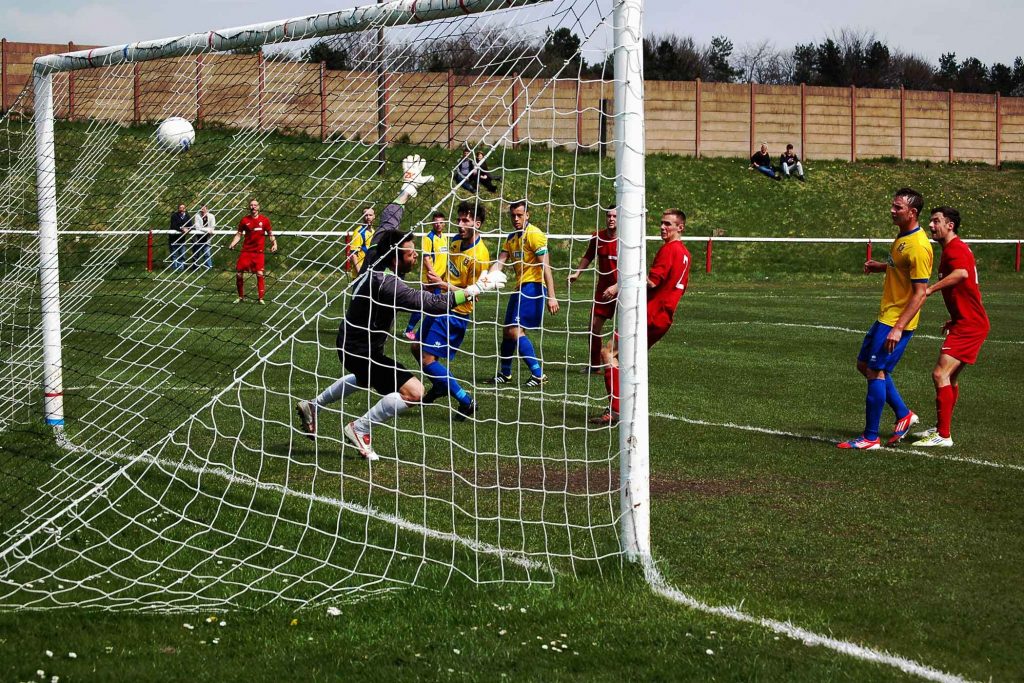 Consett lost 2-1 to one of their bogey sides, Marske United, on this day in 2013, in what they hoped* would be their penultimate game at their crumbling old Belle Vue Park ground.

But they felt they deserved at last a point from this Bank Holiday Monday encounter, which came three days after a long-overdue win at Whitley Bay (featured here).

There was a VIP guest in the shape of North West Durham MP Pat Glass, who was introduced to the teams as she paid a visit to the old ground as the club began a long goodbye which would include games against both Sunderland and Newcastle United.

Manager Kenny Lindoe made two changes to the side which had won at Hillheads, with skipper Carl Piecha returning and youngster Kieran Martin making his first start. They took the places of Craig Robson – missing for just the second time this season – and Steven Aiston.

It was Martin, on loan from Sunderland Academy, who had the game’s first chance on two minutes, cutting in from the left but hitting his shot straight at Scott Allison. On 10 minutes top scorer Michael Mackay got his first sight of goal, but his header from Aris Guerin-Lokonga’s cross lacked power and was an easy take for the Marske keeper.

The visitors’ first proper opening came on 18 minutes, when John Alexander found a gap in the Consett defence, and homed in on goal, but Chris Elliott stood up well to pull off a double save at the expense of a corner.

The Steelmen didn’t heed the warning, however, and seven minutes later Marske were ahead. They were caught napping by a short-corner routine on the left, and captain Adam Wheatley stole in to head home.

On 33 minutes Marske had what they thought was a valid penalty appeal turned down as centre-forward David Onions, who had raced clear of a static back four, went down under challenge from Piecha as he shot, but the referee wasn’t interested.

Two minutes later they had doubled their advantage, however, when Karl Charlton’s ball down the left flank put Alexander in, and he went round the advancing Elliott to finish from an acute angle.

Little else of note happened in the first half, and the interval was reached with Marske 2-0 in front.

Four minutes into the second half it was almost three, as Alexander got on the wrong side of his marker, and was only thwarted by a brave save by Elliott, who hurt himself in the process, but was OK to continue after treatment.

The game to-ed and fro-ed for a while as Consett patiently sought a way back in, and Marske went more direct in their search of a killer third goal, and there were chances at both ends.

Calvin Smith put a tantalising free-kick across the face of goal which no team-mate could get on the end of, while Elliott denied Onions with a flying save as he tried to catch him out with a lobbed effort.

Smith hit a 20-yarder just wide, then Alexander put his lob over Elliott just too high after being played in by Charlton. Back at the other end, Martin scuffed a shot just wide, then Smtih was just inches away with a 30-yard free-kick which beat the goalkeeper but also the crossbar.

On 79 minutes Martin, who’d made a lively full debut, came the closest yet to reducing the arrears when he curled an effort just wide from the edge of the box after Guerin-Lokonga won the ball in the air and Andrew Cuthbertson laid it off to him.

Two minutes later Consett went even closer: Mackay reacted quickest when a defender could only head David Brown’s cross up in the air, and was the width of a crossbar away from grabbing his 35th goal of the season after his half-volleyed effort struck the woodwork.

Consett finished the game strongly, and there were chances for Guerin-Lokonga, who blazed over, and Mackay, whose one-on-one was saved by Allison, before they got one back in the second minute of injury time.

Ian Davidson’s free-kick from the right was sliced into his own net by midfielder Josh Myers, pictured top, but there simply wasn’t enough time for the home side to force the equaliser which they deserved.