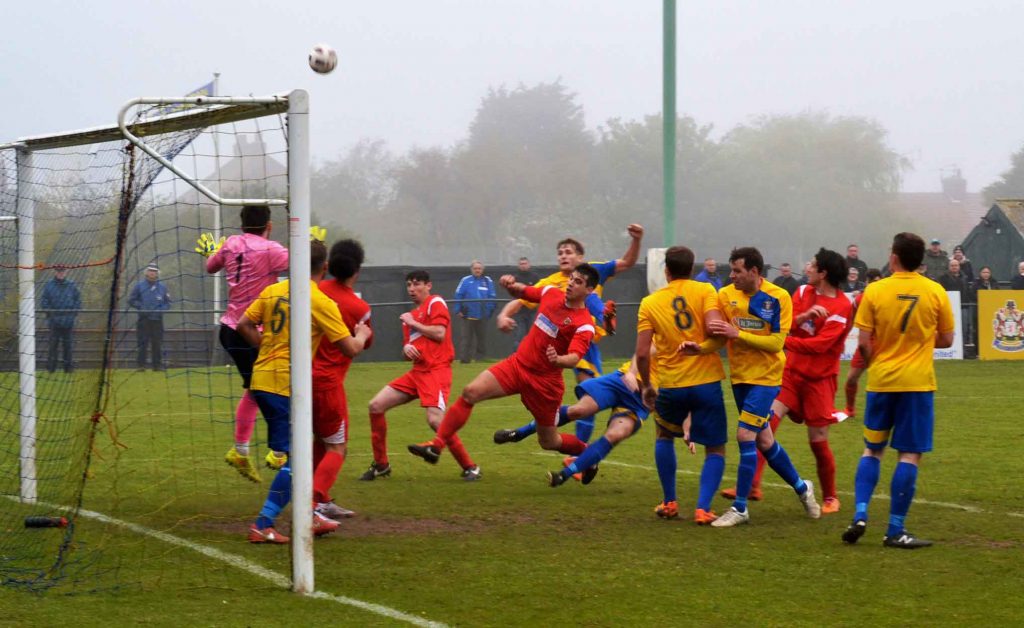 Consett’s eight-game unbeaten run came to an end when they lost 2-1 to Marske United in a tight game at a misty GER Stadium on this day four years ago.

Manager Mark Eccles made one change to the side which had beaten Morpeth in midweek, with top scorer Michael Sweet returning in place of the unavailable Nathan Steel.

With their confidence high after seven consecutive wins, the Steelmen went on the attack from the start. Skipper Danny Craggs fired a free-kick wide from 30 yards in the first minute, and five minutes later Calvin Smith had a half-chance from Jordan Lavery’s right-wing corner, but hooked the ball over from point-blank range.

It was against the run of play that the home side took the lead on eight minutes. Midfielder Glen Butterworth sprayed the ball out wide to Adam Preston on the right, and he beat his man, got to the byline and pulled the ball back to the edge of the six-yard box, where Marske’s leading scorer Jamie Owens got to it a fraction before Stephen Little to steer it beyond keeper Gareth Young.

Consett’s response was a good one, and it took a combination of keeper Robert Deans and skipper Adam Wheatley to keep out Sweet as he attacked a Jordan Nellis cross from the left at the near post.

On the half-hour Consett’s endeavours paid off when they levelled, with a goal which had an element of good fortune about it. They were awarded a free-kick 25 yards out, and Jordan Lavery curled it goalwards. Luke Sullivan threw himself at the ball, but failed to connect, but its flight deceived everyone, including Dean, and it ended up in the net without touching anyone.

Marske responded with a spell of pressure which saw them almost take the lead twice. On 35 minutes, Young got lucky when Butterworth’s corner slipped through his hands, but Matty Slocombe cleared off the line at the back post.

A minute later, a deep cross by right-back Lee Brockbank threatened to dip in, but Young tipped it to safety. Four minutes before the break, Dean was called upon at the other end to make a double save from Nellis and Sullivan at his near post, before thwarting the lurking Sweet.

In injury time a mistake by Smith saw him give away possession to Butterworth, who played in Owens, but Young got down well to the striker’s shot.

The first half of the second half was little to write home about as the sides probed for an opening, but Consett almost got their noses in front on 68 minutes when Dean made the first of three superb saves. Lavery sent over another excellent free-kick from the right, and the ball was deflected goalwards by a defender, but Dean somehow managed to turn it over the bar from point-blank range.

On 73 minutes the keeper made just about his only mistake of the game, when his clearance fell straight to Craggs, and the Consett skipper took a few steps forward before unleashing a powerful drive, which the keeper beat away. Then on 78 minutes Smith struck a shot which was heading for the top-right corner until Dean again acrobatically flung himself to divert it away from his goal.

The saves were to prove crucial, for on 82 minutes Marske got the goal which would turn out to be the winner. Consett gave away a free-kick on the left, and Butterworth’s delivery picked out Adam Wheatley, who powered home a header which gave Young no chance.

Four minutes later Bythway almost made sure of the points, but Young saved. Consett persevered to the end in a bid to keep their unbeaten run going, but the 2014-15 Northern League champions, who had been dethroned by Shildon in midweek, held on to clinch the win they needed to confirm them as runners-up.