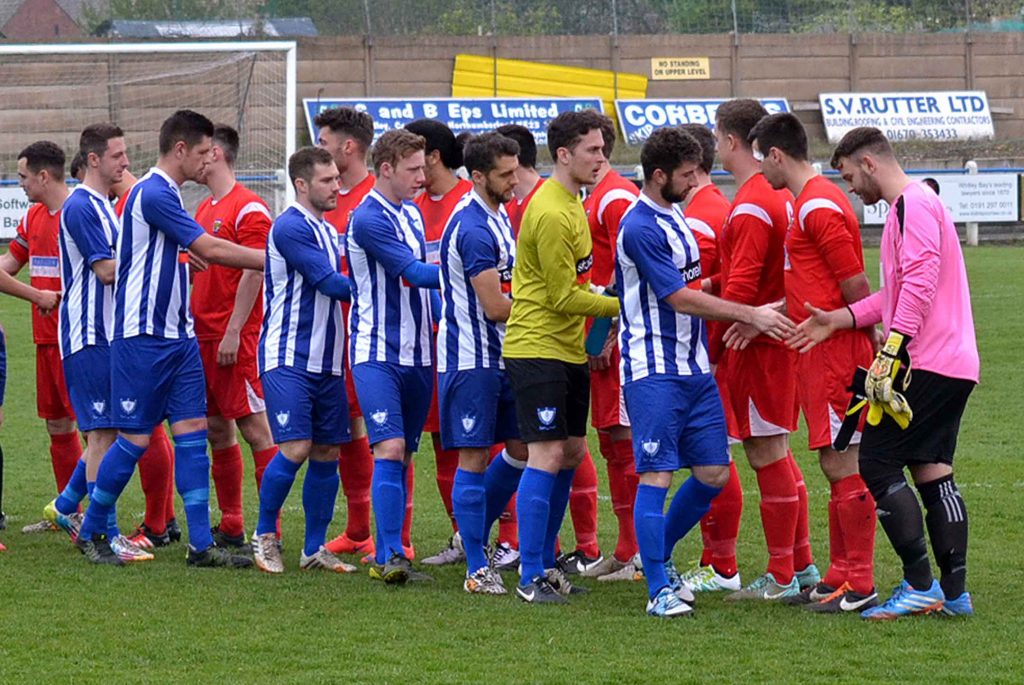 Consett completed their fixtures with a comfortable 3-0 win over Whitley Bay at Hillheads on this day in 2016 – their eighth victory in their last 10 games.

Manager Mark Eccles made two changes to the side which had lost at Marske three days earlier, with Jake Stafford and Nathan Steel coming in for Joe Grant and Michael Sweet. Whitley included two former Consett players, goalkeeper Tom Flynn and midfielder Jake Fowler, who wore the captain’s armband.

The Steelmen dominated from the start, and Jordan Nellis had the first chance after just four minutes, firing wide after being played in by skipper Danny Craggs.

Ten minutes later Consett should have taken the lead with a good move. Matty Slocombe’s ball forward was knocked down by Nellis, and Jake Stafford, arriving late, shot wide of the far post.

Craggs tried his luck from 30 yards, but was off target, but the Steelmen didn’t need to try to force the issue, as Whitley had little to offer in an attacking sense.

On the half-hour Stafford had an even better chance when his run into the box was picked out by a deep cross by Nellis, but, with only the keeper to beat, he failed to get his header on target.

In a rare foray at the other end, left-back Chris McDonald let fly from 25 yards, but the shot was a couple of yards wide.

Consett were still creating most of the chances, and Nellis had another when he chested down a half-cleared cross and smashed the ball goalwards, only to find the side netting.

The closing minutes of the half saw almost constant Consett pressure, and Nellis flashed another shot over the top from Jordan Lavery’s cross.

The first half had been largely one-way traffic, and the second proved more of the same.

A goal only seemed a matter of time, and it came on 59 minutes when good work by Nellis down the left paved the way for Nathan Steel to send a looping header over the helpless Flynn.

Consett’s tails were up, and when Nellis took the ball around the keeper from Lavery’s Crossfield pass, it took an excellent defensive interception to stop him setting up Steel for a second goal.

Whitley did create one good chance, midway through the half, after Consett gave the ball away in their own half, but it was squandered by Scott Prosser, who ballooned his shot over the bar.

A minute later the game was as good as over when Consett went two-up. A quick free-kick on the left flank sent Craggs scampering into the box, and he held the ball up and laid it off until Lavery arrived. Taking it across two defenders, the wide man steered his shot into the bottom corner past the helpless Flynn.

Two minutes later Consett scored again. A fine Calvin Smith pass sent Lavery clear, and although Flynn managed to halt him as he tried to go round the keeper, he managed to keep the ball alive and set it up for Gibbons to thump a low drive home for No 3.

It was almost four in the closing moments when Nellis and Lavery both had shots saved by Flynn, who was just about the only home player to emerge with any credit.

The result lifted Consett to fifth, and although the resurgent Steelmen but were overhauled by Newton Aycliffe and North Shields to finish seventh – two places higher than last season, and tantalisingly close to the pre-season target of a top-six finish.