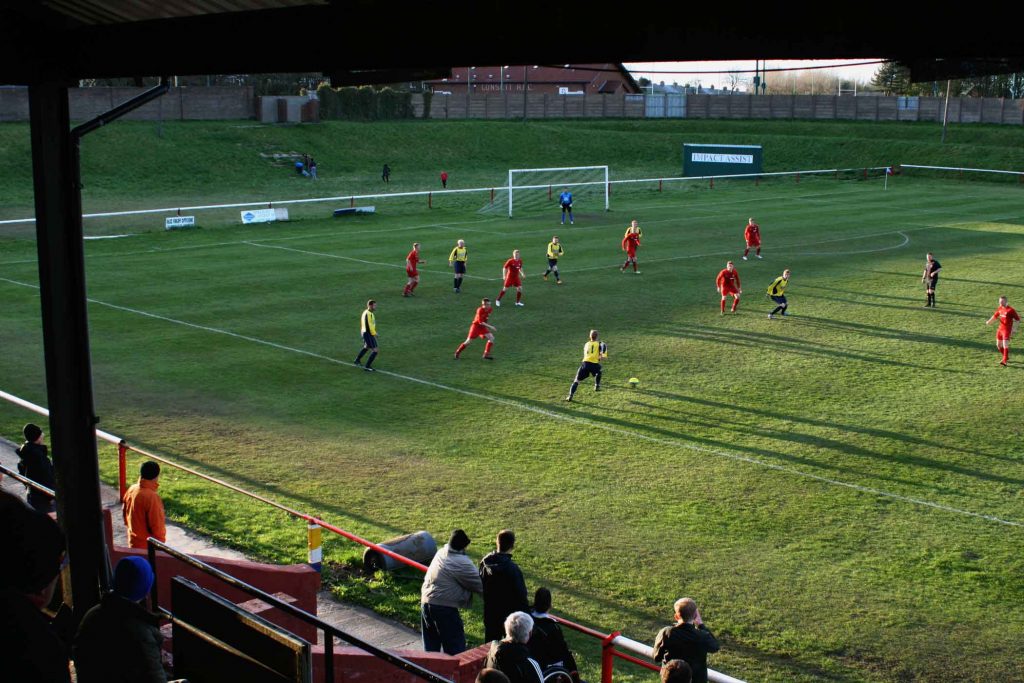 Consett brought down the curtain on 63 years at Belle Vue Park on this day seven years ago with a game they didn’t have to expect to play.

The Northern League ordered that they play relegation-threatened Newcastle Benfield again after floodlight failure caused the original fixture to be abandoned two weeks earlier, with 12 minutes left to play.

Far from being the great occasion which would have befitted the last Northern League game at the ground, this Monday evening match was typical end-of-season fare, with few chances at either end, and Benfield – who led 2-0 when the 29 April game was curtailed due to bad light – doing enough to make sure of 1st Division survival, by winning 2-1

Manager Kenny Lindoe made one change to the side which had drawn 2-2 with FA Vase winners Spennymoor Town on Saturday, with Ian Davidson coming in at centre-back for Carl Piecha.

With the skipper and vice-captain Craig Robson missing, the honour of captaining Consett in their last-ever competitive game at Belle Vue fell to 19-year-old Matty Slocombe – who had recently agreed to sign on contract for next season and was being touted as a captain for the future.

Benfield included three ex-Steelmen in their line-up – Gary Ormston, Brian Dodsworth and Richie Slaughter – with a fourth, Steven Brown, on the bench. Their player-manager was Steve Bowey, who would go on to be a player-coach at Consett.

Consett showed first, and they had their first chance on eight minutes, when David Brown’s cross from the left picked out Aris Guerin-Lokonga, who beat his man and got to the by-line, only to see his cross cut out by a combination of goalkeeper and defender. The resulting corner was half-cleared to Michael Mackay, whose volley from the edge of the box went a yard wide of the right-hand post.

Benfield’s first chance came on 13 minutes when Michael Pearson was penalised for handball a few yards outside the box, and Paul Talbot curled a free-kick over the wall, but straight at Peter Jameson, who clutched the ball at the second attempt.

The opening goal came on 37 minutes, and it came from a player who made almost 250 appearances in Consett colours. Unfortunately, however, he now plays for Benfield! A cross was swung over from the right, Jameson came to challenge in the air and missed, Ian Graham kept the ball alive in the danger area, and old boy Ormston swept it into the corner to give the Tynesiders a lifeline.

Three minutes later it was 2-0, and this time there was an element of fortune about the goal. Dodsworth sent over a corner from the left, it was flicked on at the front of the six-yard box, and Benfield player-manager Steve Bowey leapt for a header at the back post. He missed the ball, but it came off the post, struck him as he landed, and went in!

A minute into added time at the end of the first half Consett got one back. Ever-present midfielder Calvin Smith, playing his 57th game of the season, played a long ball from inside his own half, which visiting keeper Jake Cunningham rushed out to meet. Guerin-Lokonga beat him to it and set up Mackay, who fired past two defenders into the unguarded net from 16 yards for his 35th goal of the season.

The second half was an anti-climax, with Benfield content to sit on their lead, and a tired-looking Consett putting in plenty of huff and puff, but simply playing out their season.

Their best chance came six minutes into the half when Sullivan’s corner was helped on at the front post, and Pearson, coming in late, was inches away from getting on the end of the loose ball.

Benfield had a couple of chances to clinch the game: Ian Graham flashed a shot over from Dodsworth’s corner, then Pearson spared Jameson’s blushes after the keeper came out of his box to kick clear, missed his clearance, and Bowey passed to Young, whose shot was cleared off the line by the stand-in centre-back.

A glut of substitutions followed in the last 20 minutes, and the only real chance fell to one of the subs, Steven Aiston, whose thunderous injury-time volley, heading for the top corner, was blocked by a superb piece of defending by Benfield skipper Kevin Leighton.

Dodsworth flashed a shot across the face of goal in added time, but it didn’t matter, because Benfield were safe, and Consett had played their last proper match at Belle Vue. The presentation of commemorative medals to those who had taken part in the last game closed the lid on 63 years of history.