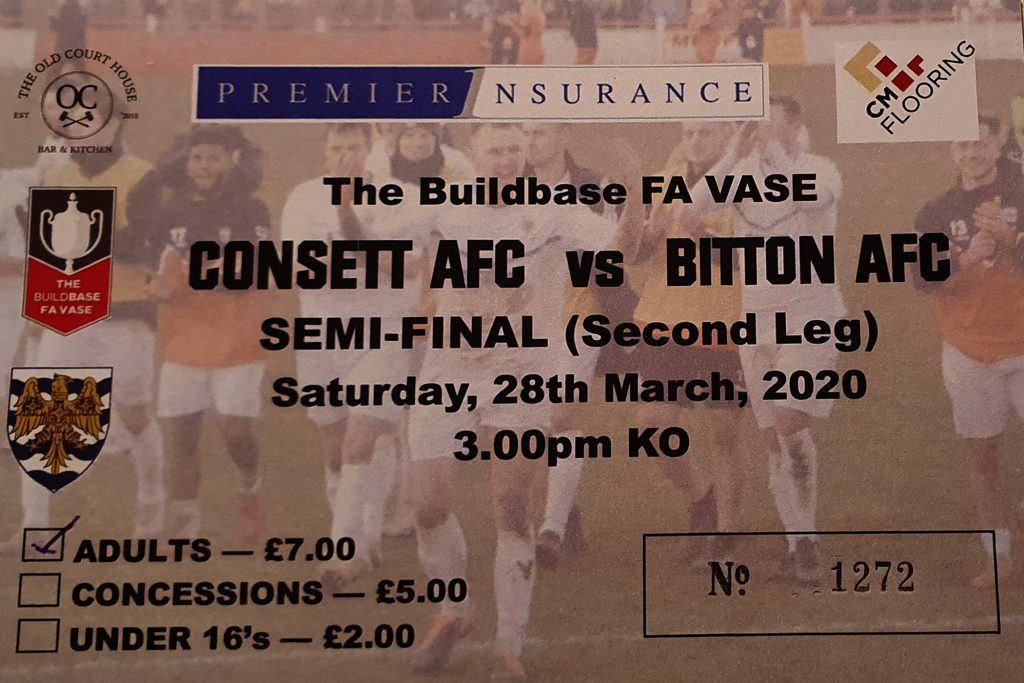 Consett AFC Chairman Frank Bell today issued a personal message to fans who were unable to get into the FA Vase semi-final, and advised how they can claim a refund.

Due to continuing restrictions to prevent the spread of Covid-19, the club was only allowed to have 300 paying spectators at the game versus Bitton on Saturday 5 September.

Now, with the FA Vase final postponed until such time as fans can attend in reasonable numbers, but no guarantees as to how many tickets we will be allocated, the club has made the decision to refund money now to those semi-final ticket holders who missed out.

Frank said: “First of all, I would like to say a huge ‘thank you’ for your patience during these challenging times. The club has, during lockdown and over the last several weeks, worked tirelessly with the Government department DCMS and The FA to increase the numbers that we could allow to attend the FA Vase semi-final.

“The club has also been working to try to secure guaranteed final tickets for those fans who bought semi-final tickets, but were unable to get in. During these negotiations last week the Government issued new guidelines for Covid, meaning the total number of attendees at the FA Vase final would be reduced to 1,000.

“On the original total allowance only 6,000 tickets were being released to fans – 1,500 to each of the four finalists. The reduction of the capacity to 1,000 effectively meant no fans would be allowed in to watch the final on 27 September.

“As such we requested a delay in the final until such times as the Government and The FA could allow fans in to Wembley. Hebburn agreed with our request, and I can only thank them for their co-operation, which has been excellent throughout these difficult times. I should also like to thank The FA, who have listened sympathetically to ongoing requests to try and do what we can for the fans.

“The FA are still determined to play this competition at Wembley, as is the wish of the sponsors and everyone else involved. The club has done all that it can with regard to try to achieve the best outcome for fans, with the matter escalating as far as the Secretary of State.

“However, the club cannot give any guarantees on future tickets at this time, and as such we can announce the arrangements for fans who secured tickets for the semi-final but were unable to attend.

“The club will be open from Tuesday 15 September to Friday 25 September, from 10am to 8pm, to refund semi-final ticket holders who require a refund. Refunds can only be received at the club on the return of tickets.

“Many of you have donated your ticket money to the club, and for this and your ongoing incredible support in these challenging times the club is truly grateful. However, these have been challenging times for lots of families in so many ways too, and we should not forget that.

“The club would like to thank you for your incredible patience during this period, and going forward we will do our utmost to secure as many tickets as possible for our fans for when we do go to Wembley. Thank you, thank you, thank you.”