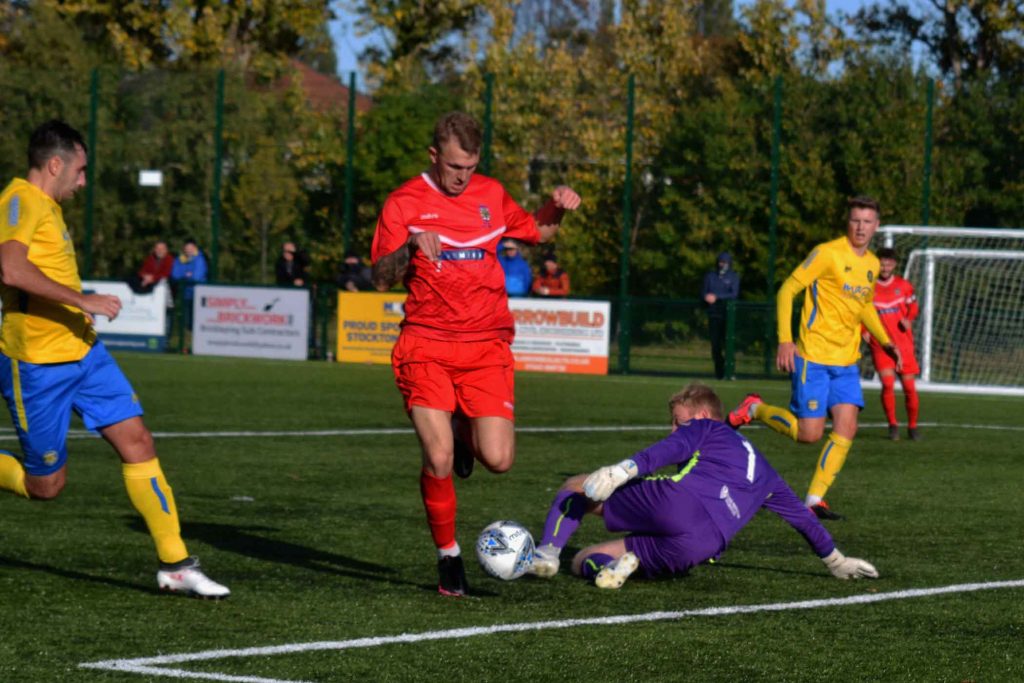 Failure to take their chances when they were on top proved costly for Consett today when lost 4-1 at Stockton Town.

The Steelmen went behind early in the Northern League Division One game at the MAP Group UK Stadium, but could have gone in four goals in front at half-time after causing their hosts no end of problems.

Kevin Hayes went close for Stockton and Darren Holden hit the bar for Consett with a cross before the home side took the lead on 13 minutes. They broke quickly from a corner, with Lewis King charging down the right and providing a pinpoint cross for Shane Henry to head home at the back post.

Consett responded well to going behind, and equalised on 20 minutes when Luke Carr’s cross from the left fell nicely for Nick Allen to fire into the corner with a half-volley for his first goal of the season.

A minute later Consett should have gone ahead when a poor defensive pass let in Ali Alshabeeb, but he slightly scuffed his effort and centre-back Tom Coulthard got back to clear off the line.

On 24 minutes another golden chance went begging as a deft touch played in Alshabeeb again, but he couldn’t decide whether to shoot or pass to Carr, and in the end did neither, trundling the ball tamely out of play.

Consett were well on top at this point, and Jake Orrell’s pass sent Calvin Smith clear, but keeper Callum Roberts stood up well to save his shot from an acute angle.

On the half hour the Steelmen had yet another chance when a long ball saw Pearson break free of his marker, but he didn’t get hold of his shot properly and the keeper again saved.

On 36 minutes Consett had another chance, after some great work by Jermaine Metz down the right saw him pick out Pearson’s run, and although his first touch took him past a defender and the keeper, pictured top, the angle was too tight to get a shot away.

Kevin Hayes looked Stockton’s main threat, and he tested namesake Kyle with a free-kick before flashing a shot across the face of goal, but when the half-time whistle went the home side could consider themselves to be fortunate to be on level terms.

The second half was a different story, however, and after an unremarkable opening period, Stockton retook the lead on 63 minutes.

King was again the provider, with Jonathan Franks meeting his cross at the near post to make it 2-1.

Consett seemed to have lost their attacking momentum, and on 76 minutes they went 3-1 down when they failed to deal with Hayes’ cross from a short corner, and skipper Adam Nicholson volleyed in from close range.

Consett rarely threatened, and on 86 minutes the scoring was complete when Jamie Owens played in fellow sub Nathan Mulligan, who rounded Hayes to make it 4-1.

The final scoreline was perhaps a harsh one on the Steelmen, whose defeat was their third in a row, but emphasised the importance of taking your chances when you’re on top.