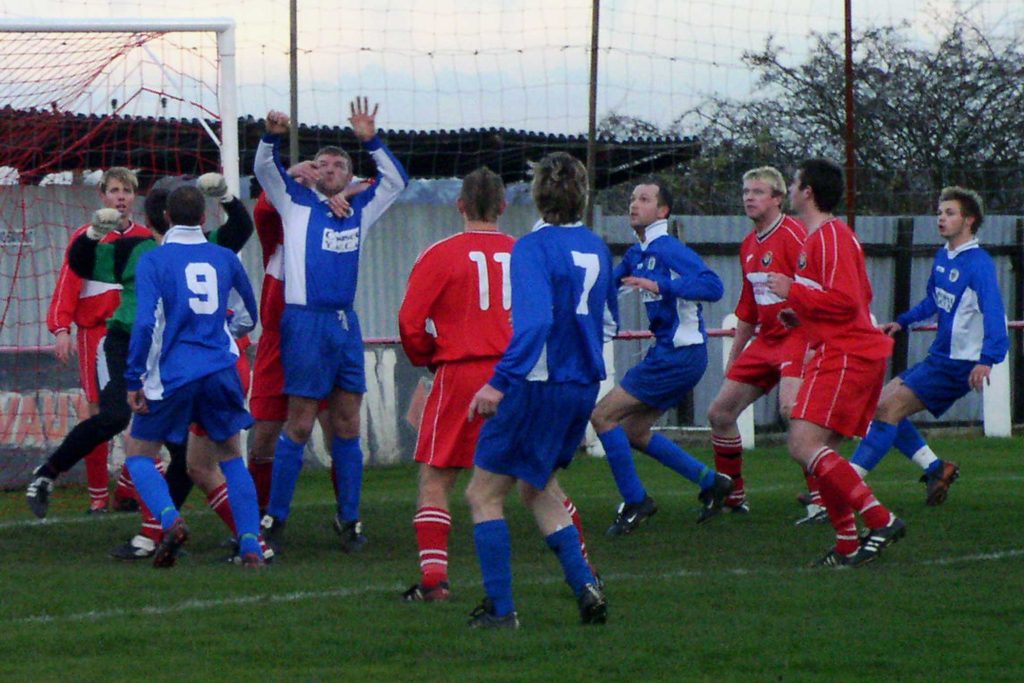 Despite leading 4-2 at one stage, Ray Lish’s team were overhauled by a determined Brandon side, who extended their unbeaten run to eight games.

For Consett it was their fifth defeat in a row, and they had just one point to show for their efforts away from Belle Vue Park so far in this season.

Consett were without skipper Jeff Sugden and new signing Michael Stubbs. Paul Curry and Andrew Thompson were demoted to the bench, the former losing the last ever-present record at the club, which meant places in the starting line-up for Andrew Morgan, Gary Price and Robbie Blemings.

The game was in doubt until 30 minutes before kick-off as the referee expressed concern about a frozen area of the pitch in one goalmouth, however he was persuaded by the players not to call the match off.

One of those quirks that the fixture schedule occasionally throws up meant that Consett’s previous game had also been against Brandon and they lost 4-1 at Belle Vue, to leave them in a relegation position.

That victory and another in midweek at Shildon had extended Brandon’s recent unbeaten run to seven games, and lifted them from second-bottom of the Northern League 1st Division to the comparative safety of 15th place.

Consett were the league’s lowest scorers, with just 17 in 16 games, and the fact that Brandon had the league’s leading goalscorer in Scott Bell, who had 21 goals in 21 games, should have sounded warning sirens. But no one expected the game which followed…

The first half was one of frantic activity, which could have produced many more goals than the seven it eventually did. It was certainly entertaining for the meagre crowd who braved the bitter cold, although the display of defending was not necessarily for the purists.

Consett started brightly and in the 5th minute Johnny Brown headed a Lee Suddes corner towards goal, but the Brandon defence scrambled it away.

Two minutes later though Brandon took the lead with a goal of great simplicity. Craig Coates split the Consett rearguard with a tremendous through ball to set Scott Bell in the clear, and he cleverly chipped James Platten to find the net.

Coates almost set up a second moments later when his crossfield ball found Shaun Gregory but he blazed over. Then in the 10th minute the busy Coates shot into the side netting.

Consett levelled on 12 minutes with a well-worked goal. Stephen Lish turned on the edge of the area to play in Gary Price. He swung the ball over to the far side of the box where Craig Tate met it with a side-footed first-time volley into the corner of the net.

The game continued in the same end-to-end vein, and in the 21st minute Mick Ford flicked on an Andrew Morgan long throw to Price, but he hooked the ball over the bar.

Two minutes later though Consett took the lead when Gary Price headed home Suddes’ corner, despite Brandon claims that the ball had not crossed the line.

The lead lasted for only one minute though as David Fort followed up his own blocked effort with a tremendous 25-yard strike that cannoned in off the underside of the bar.

On the half-hour mark, Consett went 3-2 in front when Robbie Blemings headed a weak clearance back into the Brandon area and Price nipped between the defender and goalkeeper to toe poke home for his second goal of the afternoon.

Four minutes before half time Tate almost capitalised on a deflected Darren Grimes shot, but Danny Yates in the Brandon goal got out well to save.

Within a minute though, Consett got their fourth as Lish caught Brandon skipper Marc Irwin in possession by the corner flag and crossed for Tate to score his second.

Incredibly, Brandon pulled it back to 4-3 thirty seconds later when Fort fired home the rebound after Kevin Hamilton’s shot had been saved.

There was no let up in the action after the break, although it was the home side that had much the better of proceedings as they sought to overturn the half-time deficit.

In the 49th minute, Bell robbed Blemings on the edge of the area and the ball broke to Coates, who forced a fine full-stretch save from Platten. A minute later Platten denied Brandon again when he came out well to save at the feet of Bell.

Inevitably with Brandon piling on the pressure the equaliser came in the 63rd minute. Bell pounced on hesitation in the Consett penalty area to roll the ball into the corner of the net despite Platten’s best efforts.

Brandon’s front pairing of Coates and Bell were having a field day by this point, and on 69 minutes the former squared to the latter on the edge of the Consett penalty area, but Bell’s fine drive was just wide.

The winning goal came in the 73rd minute, and again Coates and Bell were the architects. Coates got goalside of Robbie Blemings and as he broke into the penalty area the Consett youngster grabbed Coates’ shirt and hauled him back.

The referee had no option but to point to the spot and Bell converted to complete his hat-trick despite Platten getting a hand to the ball. It was the Brandon striker’s 20th league goal of the season, and 24th in all competitions. It kept him ahead of the second-top scorer, Michael Mackay of Durham City. That name sounds familiar…

Fourteen minutes from time Brandon’s Stephen Flockett skipped past a challenge before cutting back onto his left foot only to see his shot saved by Platten.

Then within a minute, in a rare Consett foray into the Brandon area, Tate went in search of his hat-trick by outpacing a defender on the corner of the penalty box and getting in a shot towards the near post. Yates appeared to have it covered, but the ball squirmed under his body and hit the upright.

As the game entered the final 10 minutes it was Brandon who looked likelier to score. First Hamilton’s header from a Fort corner forced a good save out of Platten low to his right. Then five minutes from time Hamilton’s reverse pass found Coates unmarked, but again Platten made a vital save.

Deep into stoppage time the overworked Consett keeper made another point-blank save from a Bell header after he rose to meet Coates’ cross, but the No 10 had to settle for a hat-trick, and a 5-4 win, in what was the last league meeting between the clubs.

It was a season which wouldn’t end well for Consett. They finished third-bottom, and were relegated. Brandon – who had won the league just two years earlier – finished 18th, just beating the drop, but went down the following season, and have been in the 2nd Division ever since.