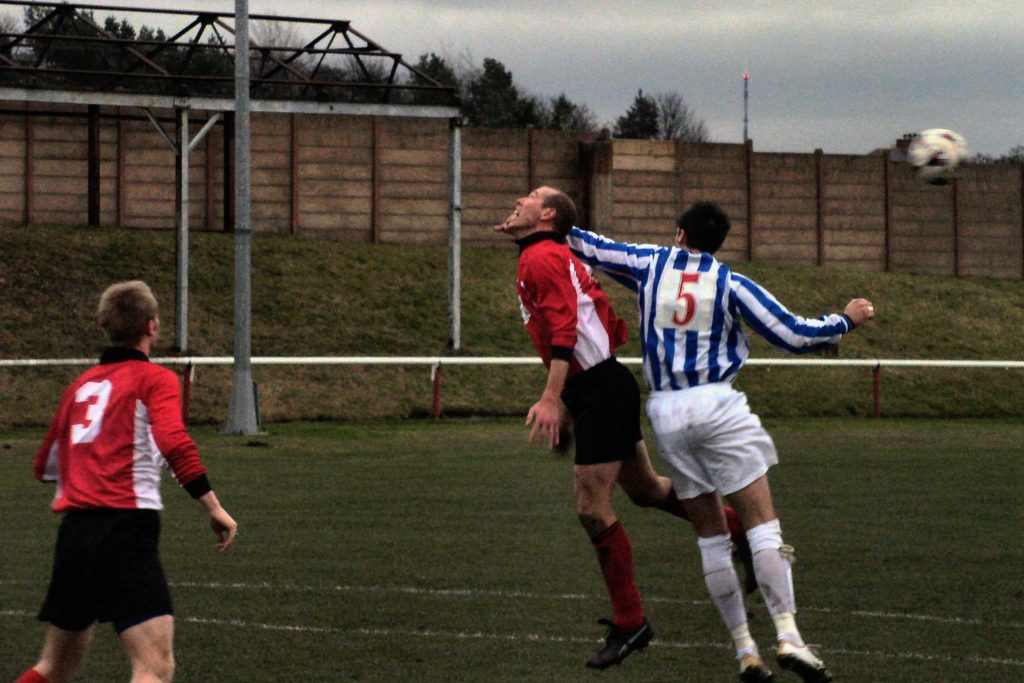 Ray Lish resigned after a 5-3 midweek defeat at Ashington in the League Cup, which followed a 5-4 reverse at Brandon in the game before that (read about that here).

There was something terribly ironic that in a season where goalscoring had been such a major problem, the Steelmen finally found their touch in front of goal, only to concede even more at the other end.

They had scored more than two in only three games, and failed to win any of them. And this turned out to be another frustrating day for Consett, who took to the field under the caretaker managership of long-serving defender and captain Jeff Sugden.

Despite the upheavals Consett had more or less a full squad to choose from, although they were left light up front by the absence of Michael Stubbs and the suspension of Micky Ford, which meant Neil Hood was pressed into service in an unfamiliar striking role.

After a quiet opening, Craig Tate picked up a loose ball and embarked upon a surging run in the 12th minute, however his shot from the edge of the area was just wide.

Whitley Bay enjoyed the greater share of possession in the opening quarter, but despite a succession of corners and free-kicks in dangerous positions, the Consett rearguard was never seriously tested.

Consett took the lead a minute later when, following persistence on the right flank by Tate and Hood, they were awarded a free-kick. Lee Suddes delivered it to the back post, where Johnny Brown ghosted in to head home unchallenged.

At the other end Consett’s back four, marshalled by Sugden, comfortably kept Whitley at bay, and half-time was reached with the Steelmen a goal to the good.

Consett began the second half well, and seven minutes after the break Suddes pounced on a short back pass, but Bay keeper Burke rushed out to save well at his feet. Moments later Andrew Thompson tried his luck with a free-kick from 25 yards, which Burke was grateful to tip over the bar.

Whitley Bay weathered the storm though, and equalised in the 59th minute. A corner was only half-cleared, and the ball was played back into the area to Paul Thompson, who laid it off to substitute David Turner, who shot across Platten into the corner of the net.

Seven minutes later the visitors scored what proved to be the winning goal when Ben Ryan picked up the ball and shot from outside the area. His effort took a big deflection, which wrong-footed Platten and ended up in the Consett net.

Consett’s bad luck was compounded in the 78th minute. Tate broke down the left and played the ball infield to Grimes – who struck a superb left-footed volley from 25 yards. It cannoned against the bar, and bounced to safety over the head of the incoming Gary Price, who had the goal at his mercy.

Bay had another chance nine minutes from time when man-of-the-match Ben Ryan played a perfectly weighted ball over the Consett defence and into the path of centre-back Leon Ryan, who had been pushed up front, and he feinted both ways before shooting just over.

For all that they hadn’t played badly, the Steelmen were unable to prevent a seventh successive defeat – and this was the least deserved of the seven. But for the third league game in a row, they had let a lead slip and came away with nothing.