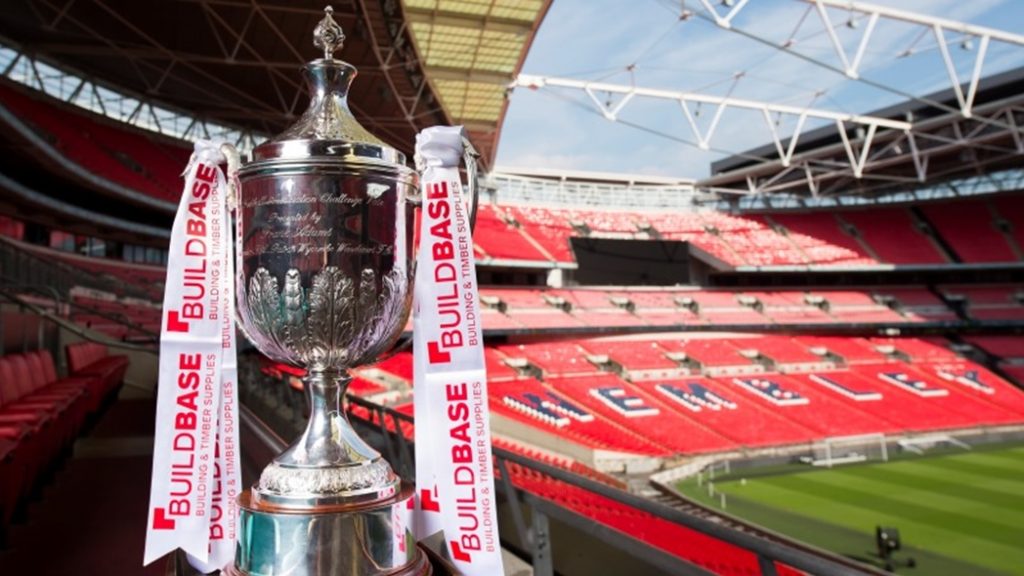 Consett have today been told by The FA that our much-delayed 2020 FA Vase Final v Hebburn Town will take place at Wembley on Bank Holiday Monday, May 3.

However, continuing restrictions to contain the spread of coronavirus mean the game will be played behind closed doors, as under the Government’s roadmap out of lockdown spectators are not allowed at non-elite football until May 17.

The kick-off time is not yet known, but the eagerly-awaited showdown against our Northern League rivals, and the FA Trophy Final between Harrogate Town and Concord Rangers, which make up Non-League Finals Day, will be screened live on television by BT Sport.

Consett AFC Chairman Frank Bell said: “I’m obviously delighted the club will be able to fulfil its dream of playing at Wembley at last, but I’m absolutely gutted it will be behind closed doors.

“I have been in regular contact with The FA since we won our semi-final in September, closely co-operating and trying every which way we can to get the game played in front of our supporters.

“We have waited as long as we possibly could and explored every possibility with The FA to try to ensure that supporters would be present.

“Unfortunately, there were lots of other factors to be taken into consideration, and this is the one and only opportunity they could give us to play the final at Wembley.

“I feel so sorry for all the fans who are going to miss out on the chance to watch their team play at the home of English football, but we will do our very best to bring the FA Vase home for them.”

A statement issued by the FA said: “Despite our best efforts to accommodate limited spectators, a suitable date was sadly not available, and both the Buildbase FA Vase Final between Consett and Hebburn Town and Buildbase FA Trophy Final featuring Harrogate Town and Concord Rangers will be played behind closed doors.

“We will continue to monitor the national Covid-19 situation alongside the Department for Digital, Culture, Media & Sport, and would also like to thank the remaining clubs in these competitions and their supporters for being patient and understanding during this challenging time.”

This season’s FA Vase will re-start behind closed doors on Saturday, April 10, with the final to be held at Wembley on Saturday, May 22, with limited spectators present, in line with the Government’s roadmap out of lockdown.