Consett recorded one of their biggest-ever away wins in the Northern League tonight, stunning hosts Whickham with a 9-2 victory at the Glebe ground.

Forward Ali Alshabeeb and centre-back Arjun Purewal both claimed their first hat-tricks for the club, while Dale Pearson maintained his goal-a-game record and there was a long-awaited first of the season for Matty Slocombe.

Consett had a stiff wind behind them, and got the opening goal in the 12th minute, when skipper Arjun Purewal got the faintest touch to Jake Orrell’s left-wing cross to take it beyond the keeper.

Two minutes later the advantage was doubled when Jermaine Metz’s throw-in on the right sent Dale Pearson away down the flank, and he unselfishly picked out Ali Alshabeeb to score from a few yards out.

On 31 minutes it was 3-0 when Orrell broke from midfield and his pass sent Alshabeeb clear, and he kept his cool to slot the ball past the keeper.

Whickham gave themselves a lifeline two minutes later, when they caught Consett trying to play out from the back, and Thomas Scothern made it 3-1.

But within five minutes Consett’s three-goal lead was restored when great work by Luke Carr down the left set up Matty Slocombe to finish at the back post for his first goal of the season, and the club’s 100th in all competitions.

A minute later it was 5-1, as a through ball left Alshabeeb clean through again, pictured below, and again he kept his nerve to complete a first-half hat-trick. 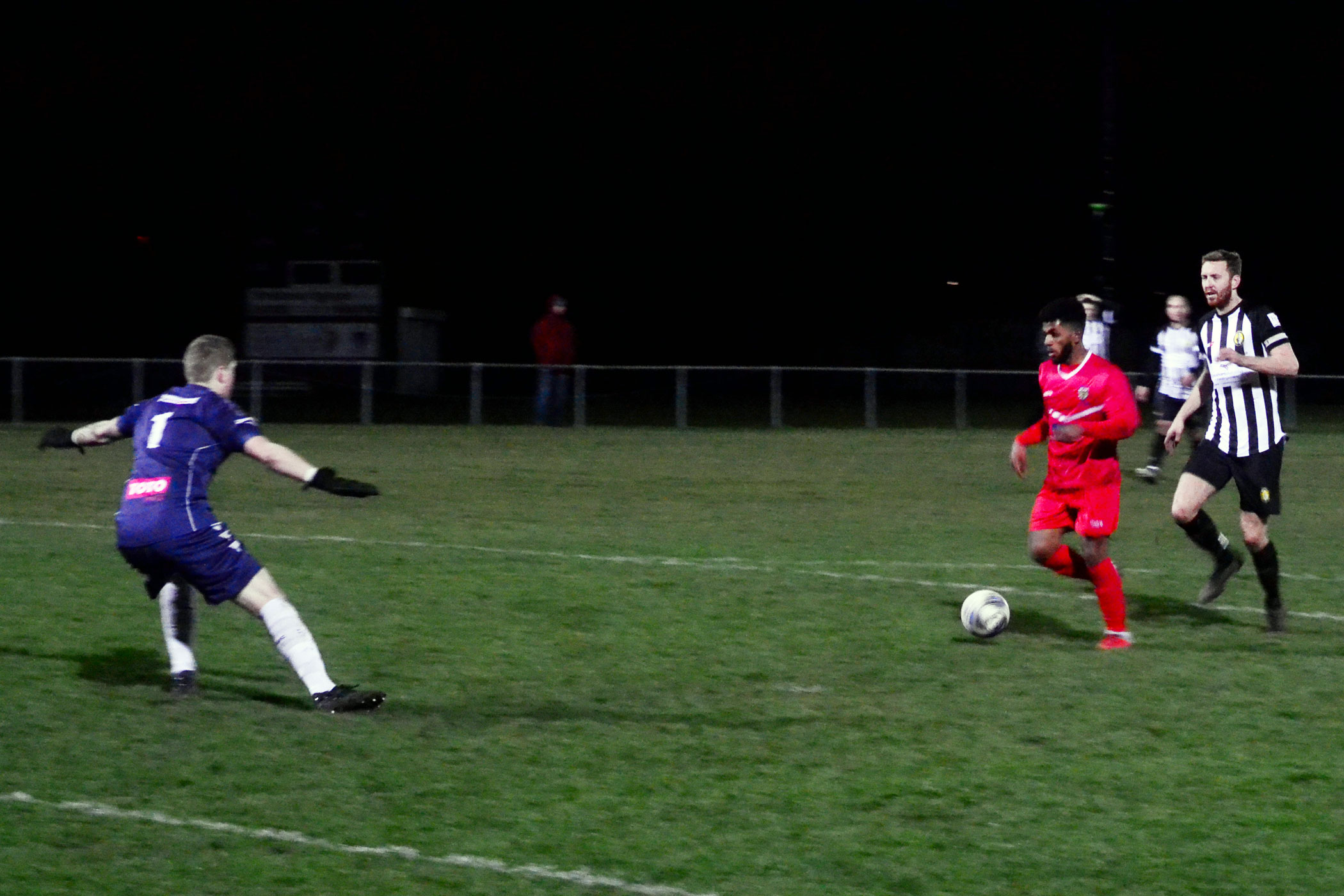 Kicking into the stiff wind, some supporters feared the second half might be a different story, but three goals in six minutes ended any lingering hopes of a Whickham comeback.

It took just two minutes of the half for Alshabeeb to return the compliment for Dale Pearson, setting up the No 9 to score into an empty net for his 28th goal of the season.

Three minutes later Orrell picked out Purewal again with a left-wing corner, and the skipper volleyed home to make it 7-1.

And in the 53rd minute Purewal leapt highest in the crowded area to thump home a header from another Orrell corner, pictured top, for his third goal of the night, and give Consett an unassailable lead.

In the 69th minute it was 9-1 when a through ball from the back sent Pearson clear again, and he dinked the ball over the advancing keeper, pictured below, for his 29th goal in the same number of games for the club. 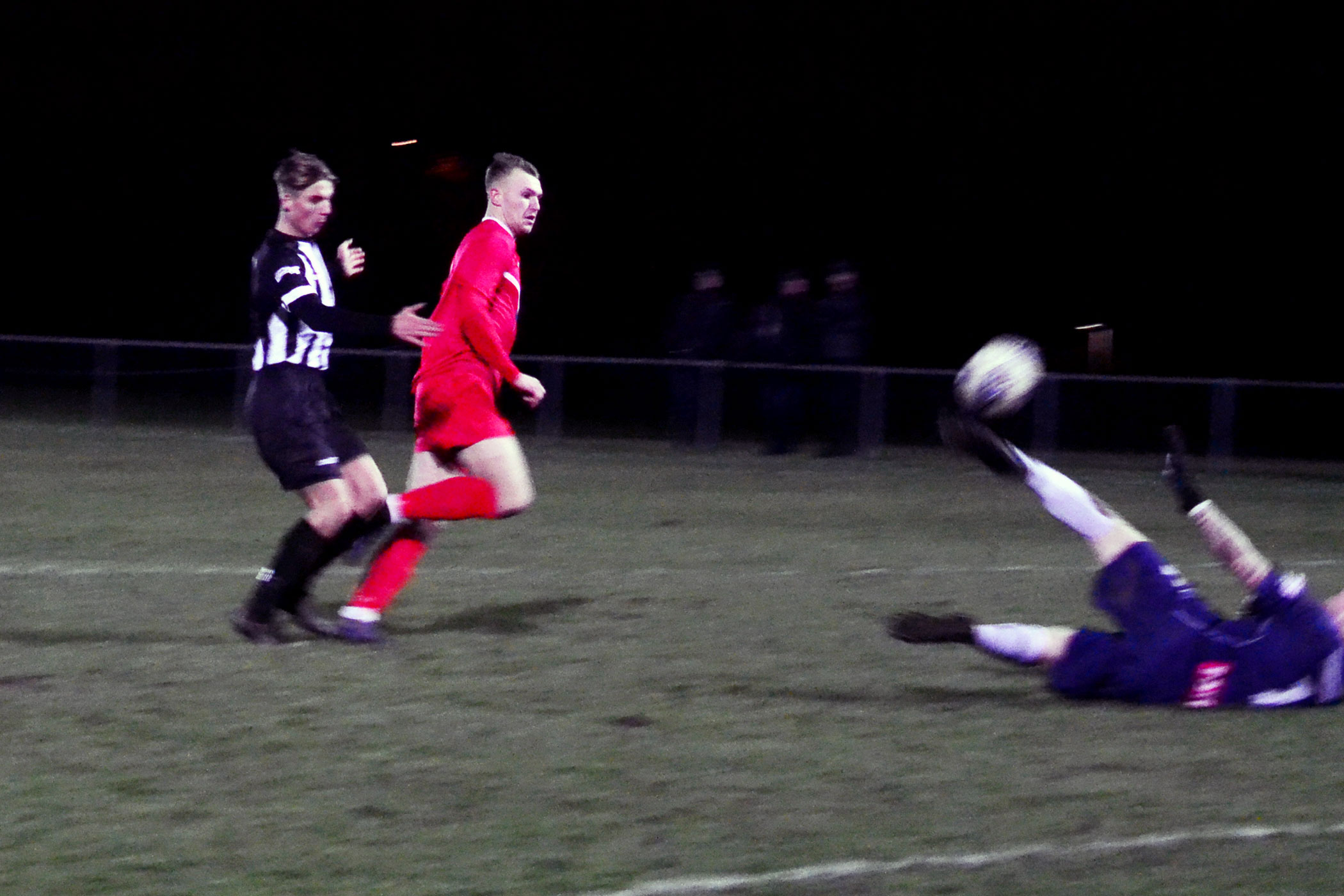 Whickham did get a consolation in the 80th minute when Charlie Exley forced the ball home from a corner, to make the final score 9-2.

In truth it could have been many more, as Whickham keeper Jack Wilson denied Pearson three times with fine saves, Carr was twice just inches away from balls fizzed across the goal, and Michael Mackay had a penalty shout waved away when his shot seemed to strike a defender’s hand.

It was a stunning performance and result, however, with nine the most goals the club has scored away from home in 50 seasons in the Northern League.

Footnote: He won’t thank us for pointing this out, but Whickham goalkeeper Jack Wilson has conceded nine against Consett before, back in 2016-17 when he was in goal for Chester-le-Street as we beat them 9-0 at Belle View. He didn’t have a bad game that day either…