West Allotment hadn’t beaten Consett in 18 previous meetings, but had a couple of chances early on. On five minutes Michael Trodd’s pass found centre-forward Dean Walker, whose shot was saved by Kyle Hayes at the expense of a corner. Then Shane Jones tried his luck from long range, but his tame effort didn’t trouble Hayes.

It took Consett 10 minutes to muster their first attempt on goal, but Dale Pearson’s effort flew over the bar.

Consett began to dominate possession, and on 15 minutes Carl Lawson had a chance to beat his tally for last season, but his first-time effort from Carr’s pass was just wide.

West Allotment still posed a danger on the break, and on 22 minutes put together a quick break down the left which ended with Jack Errington skewing his shot inches wide of the far post.

A minute later Consett really should have taken the lead when Marriott’s ball in from the left found Callum Guy with space and time 12 yards out, but he dragged his shot wide of the left-hand post. The action switched quickly to the other end, when Dario dos Santos did the same for the visitors.

On 25 minutes West Allotment had their best chance of the game when Jones’s pass put Walker clean through, but the onrushing Hayes did enough to make him stab his shot wide.

On 28 minutes Consett had a good chance when Carr was fouled 25 yards out. Jake Orrell’s floated free-kick found the head of skipper Arjun Purewal, but his downward header lacked power.

A slick move involving Carr and Darren Holden saw the left-back pull the ball back for Pearson, but his low shot was saved by the keeper at his near post.

The breakthrough finally came in the 40th minute. Lawson’s pass from the left picked out Dan Marriott, and the young midfielder smashed the ball home from eight yards for his first senior goal for the club, pictured below. 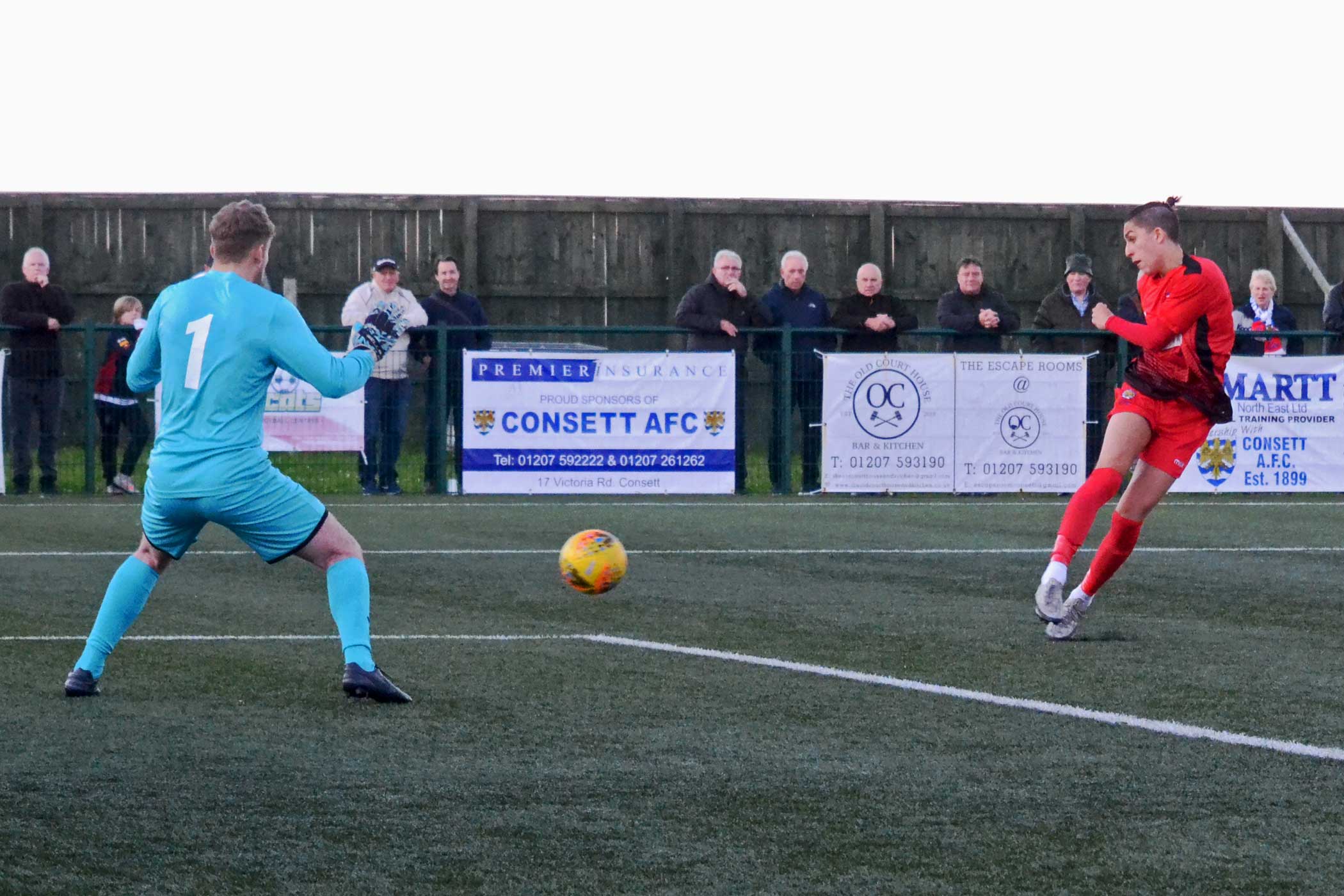 Three minutes later it was 2-0, as Carr’s right-wing cross was flicked goalwards by the head of Purewal. Keeper Finlay Hodgson came out to claim it, but seemed to spill the ball as he did so, and no one could prevent it crossing the line. Purewal tried to claim it, but it looked very much like an own goal.

The second half started as the first had ended, with Consett dominating the ball, and the only surprise was it took them 11 minutes to add to the scoreline. Dale Pearson latched onto Jake Orrell’s pass, rounded the keeper, pictured below, and walked the ball into the unguarded net. 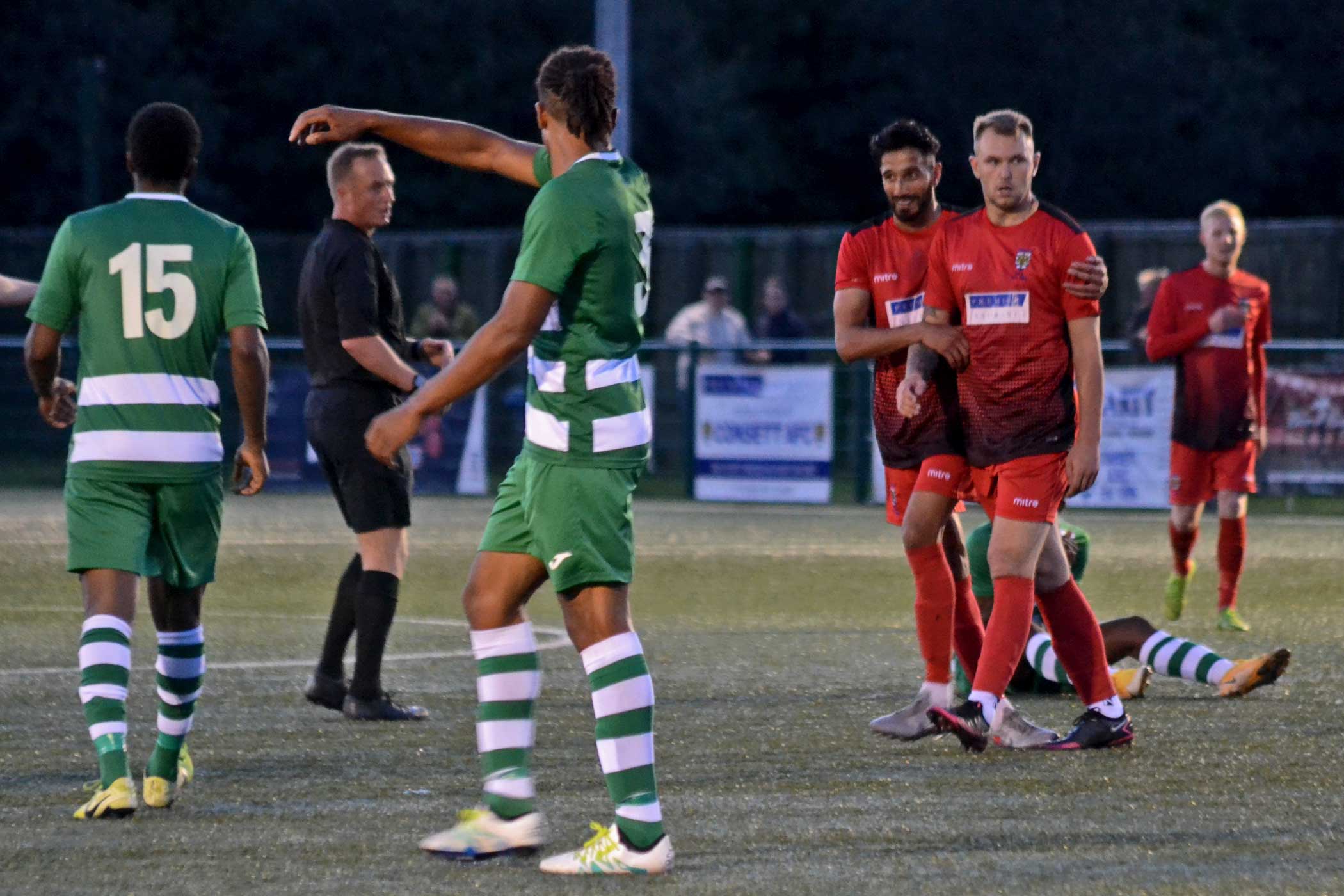 It was the striker’s third goal of the season, making him our top scorer, and his 50th goal for the club in just his 59th game. he almost grabbed a hat-trick in the 79th minute, but saw his shot on the turn from Holden’s cross blocked by a defender.

Still, Consett had inflicted a heavy defeat on manager Terry Mitchell’s former team without really hitting top gear, but their next test would be tougher: a home game v Newton Aycliffe,the only other club in the 1st Division with a 100% record so far.