Consett tasted defeat for the first time in their pre-season programme when they narrowly lost 2-1 at home to Pickering Town.

Consett were again missing several attacking players, with Ali Alshabeeb joining Dale Pearson and Luke Carr among the walking wounded, but skipper Arjun Purewal returned from injury to get his first taste of pre-season action.

Consett took the game to their higher-ranked visitors, and had their first chance after four minutes, when Jermaine Metz picked out Jake Orrell’s run into the box with a ball in from the right, but the No 10’s audacious backflick was off target. On nine minutes they had another chance when Max Russell hit a fine swerving effort from 25 yards, and the keeper clawed it out for a corner.

But the home side fell behind in the 19th minute when Pickering skipper Wayne Brooksby picked out Leon Osborne, who finished low and powerfully past Kyle Hayes at his near post.

Michael Mackay struck a dipping effort just over the bar on 36 minutes after good build-up play by Ross Wilkisnon and Orrell, but the Pikes doubled their lead right on half-time when Brooksby headed a deep corner back into the danger area, Osborne flicked it on and Jackson Jowett nodded in from close range.

Consett, who made four half-time substitutions, came out for the second half full of attacking intent, and created more chances in the first five minutes than they had in the whole first half. First Thomas McAloon had a shot blocked, then Orrell fired over from a Carl Lawson cross from the right. Lawson was just off target after being set up by Calvin Smith, and Darren Holden’s effort was also too high.

They got a foothold back in the game in the 73rd minute when referee Andrew Kitchen judged that Thomas McAloon had been fouled just outside the box, and Calvin Smith swept the resulting free-kick into the top corner, pictured below. 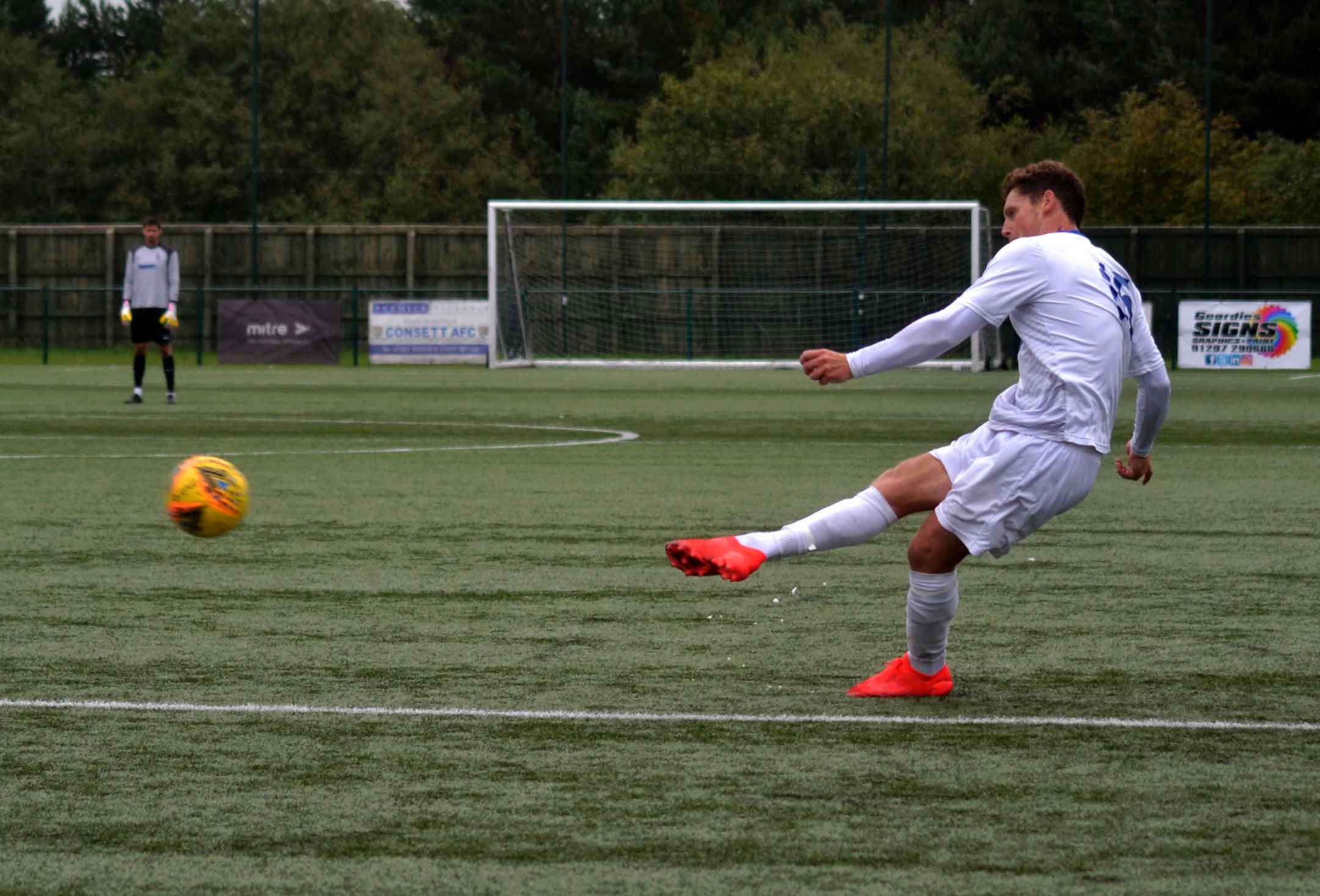 Their best chance of an equaliser came in the 88th minute, when an excellent pass by Daniel Marriott put Michael Mackay through, but defender Ben Etherington saved the visitors with a superb last-ditch challenge, pictured top, just as the veteran striker pulled the trigger.

There was one more chance right at the death, when McAloon did well to keep the ball in on the byline and centre into the middle, but neither Russell nor Mackay could find the finishing touch to force the draw which was the least Consett deserved.

They were much-improved from their previous friendlies, but were left to reflect on missed chances, and the fact that Pickering, who play one league higher, had just two real opportunities and took them both.