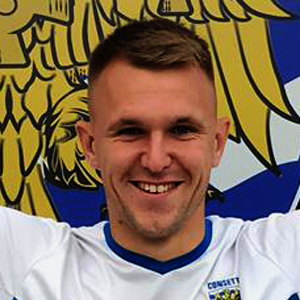 The 25-year-old, who is a strong, quick forward with an eye for goal, was signed from National League North side Blyth Spartans on 22 August 2019.

He quickly made his mark and became a crowd favourite at Belle View, and had 30 goals for the club before the season was declared null and void due to the coronavirus pandemic.

Made his name with 76 goals in a season for Hazlerigg Victory in the Tyneside Amateur League, and adapted effortlessly to the Northern League, scoring regularly at West Allotment Celtic, which earned him a move to Dunston.

A spell followed at Morpeth Town, where he was a teammate of Luke Carr’s, and an unused sub in the 2016 FA Vase final, and since then he has played for Blyth Town, West Allotment again, Ashington and Newcastle Benfield.