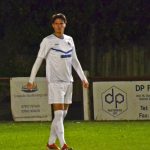 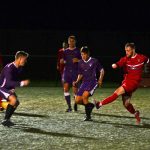 Consett used most of the squad who aren’t starting games regularly in a friendly against Durham University at a rainy Belle View tonight.

And despite suffering a 2-1 defeat, manager Terry Mitchell was pleased to get some minutes into the legs of players who will have a big part to play in the weeks and months to come as injuries and suspensions kick in.

Only goalkeeper Kyle Hayes remained from the team which started against Sunderland RCA at the weekend. Take out him, Nick Allen and Andrei-Vasile Ardelean, and the other eight players only had nine starts between them this season.

Nathan Lawrence and Thomas McAloon both got their first taste of action since rejoining the club, while some players looked understandably rusty due to lack of game time.

Consett took the lead on 28 minutes, when centre-back Simon Jakab finished from close range in a goalmouth scramble from a right-wing corner.

A minute later it was 1-1 when Durham centre-back Verstraaten netted at the back post from a corner.

Six minutes before half-time the students, who were playing their first pre-season game, took the lead when Hayward surged into the box and fired in off the post.

And that’s the way it stayed, as neither side troubled the scorers in the second period. Andrei-Vasile Ardelean did have the ball in the net, but was correctly ruled offside. 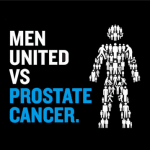