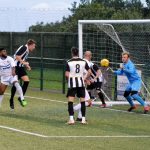 A close-range header from diminutive forward Ali Alshabeeb proved to be the difference as Consett made it two friendly wins in four days tonight as Consett beat Tow Law Town 1-0.

Ali, who turned 20 today, headed home from a corner in the 58th minute as the Lawyers frustrated their hosts at a blustery Belle View.

The behind-closed-doors encounter saw manager Terry Mitchell start with six of the side who began Saturday’s game at Blue Star, and there were first pre-season run-outs for Simon Jakab and Jake Orrell.

Tow Law had three ex-Steelmen in their ranks in Mattie Moffat, Adam Knowles and Michael Brown, and plenty of experience in the likes of Daryll Hall, Jeff Smith and Barrie Smith.

The opening period saw Consett enjoying lots of possession, but Tow Law defending well, and it was 19 minutes before the Steelmen created their first chance, which keeper Lewis Graham saved well from Thomas McAloon after good build-up play from Luke Carr and Orrell.

On 26 minutes Consett were awarded a penalty when the lively Alshabeeb was fouled, but the keeper made a good save from Carr’s spot-kick, diving low to his left.

Adam Male almost caught out the keeper with a 20-yarder to his near post on 33 minutes, and just before half-time Graham pulled off a fine save from McAloon after some great wing play by Alshabeeb.

It remained 0-0 at half-time, and Consett made seven changes for the start of the second half, with only Alshabeeb, Male, Jakob and Jermaine Metz staying on. The subs included Michael Mackay and Antonio Agostinho, both tasting their first pre-season action.

The game continued in the same vein, with Consett enjoying lots of the ball, and Tow Law working hard to deny them chances, but the breakthrough came just before the hour.

Summer signing Carl Lawson delivered a right-wing corner into the six-yard box, and Alshabeeb got in front of his much taller marker to nod home, despite Graham’s best efforts to stop the ball crossing the line.

Another swathe of substitutions saw another new boy, Lewis Green, make his first appearance in a Consett shirt, but it was Agostinho who came closest to adding to the scoring, when his speculative effort was tipped over by the keeper.

For all their hard work, discipline and tidy football, Tow Law rarely threatened the Consett goal, with a 77th-minute Jeff Smith free-kick which flashed well wide their only effort of note. 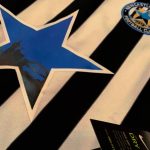