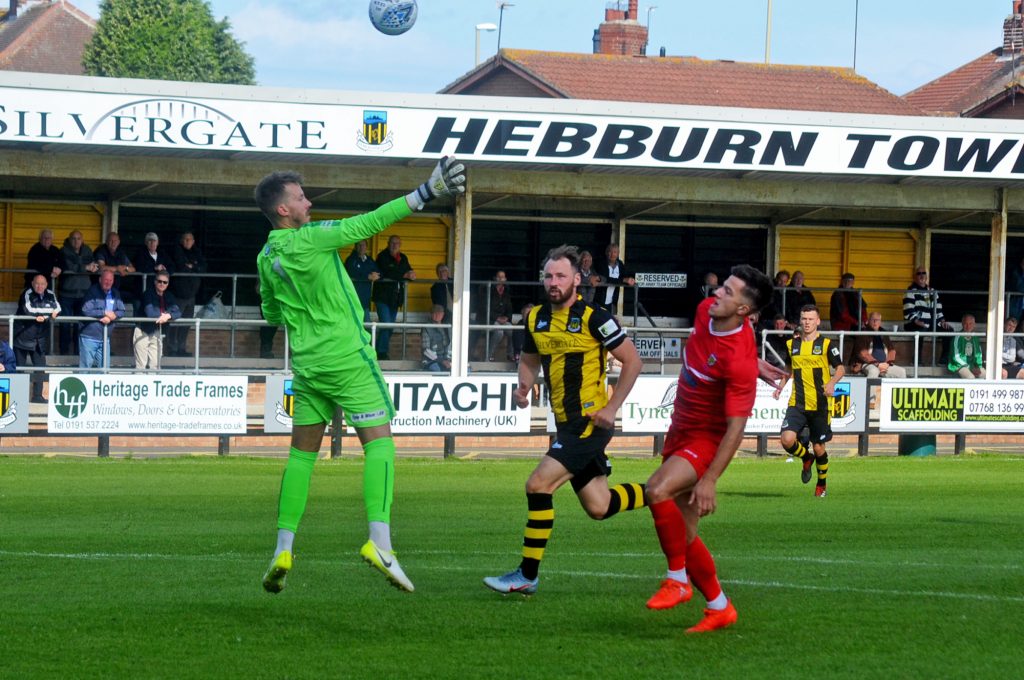 Consett were far from their best at a windy Energy Check Stadium today, but brought home a well-deserved point from a 0-0 draw with league leaders Hebburn Town.

Their best chance came in the first 30 seconds, when Jermaine Metz’s pass saw Andrei-Vasile Ardelean running through, but his lob past the advancing keeper had too much on it.

Recent signing Dale Pearson had another chance on six minutes, but scuffed his effort wide of the far post.

With a strong wind at their back, the home side took control after that, and Michael Richardson went close with a 25-yard free-kick, before Consett keeper Kyle Hayes made a good save from Oliver Martin.

There was a let-off for Consett on the half hour when they gave the ball away in their own half and Richardson’s pass put Graeme Armstrong through, but he dragged his shot wide.

On 36 minutes Consett had a strong appeal for a penalty when Luke Carr, who was captain in the absence of Arjun Purewal, was fouled as he surged into the box.

Instead of pointing to the spot the referee decided he had been impeded inches outside the box, and gave only a free-kick, which Jake Stafford drove into the wall.

Four minutes before the break Ardelean made a chance out of nothing when he beat the keeper to a ball played down the channel, and chipped him from an acute angle, only to see the ball rebound off the crossbar and be scrambled away.

Hebburn’s best chance came on 57 minutes when Ben Dibb-Fuller burst through, but Hayes bravely saved his shot, and then needed lengthy treatment after the forward followed through on him.

That was it as far as clear-cut chances went as the gusty wind picked up and ruined the game as a spectacle, and although they rarely threatened the home goal, a good rearguard action saw Consett pick up a deserved point.