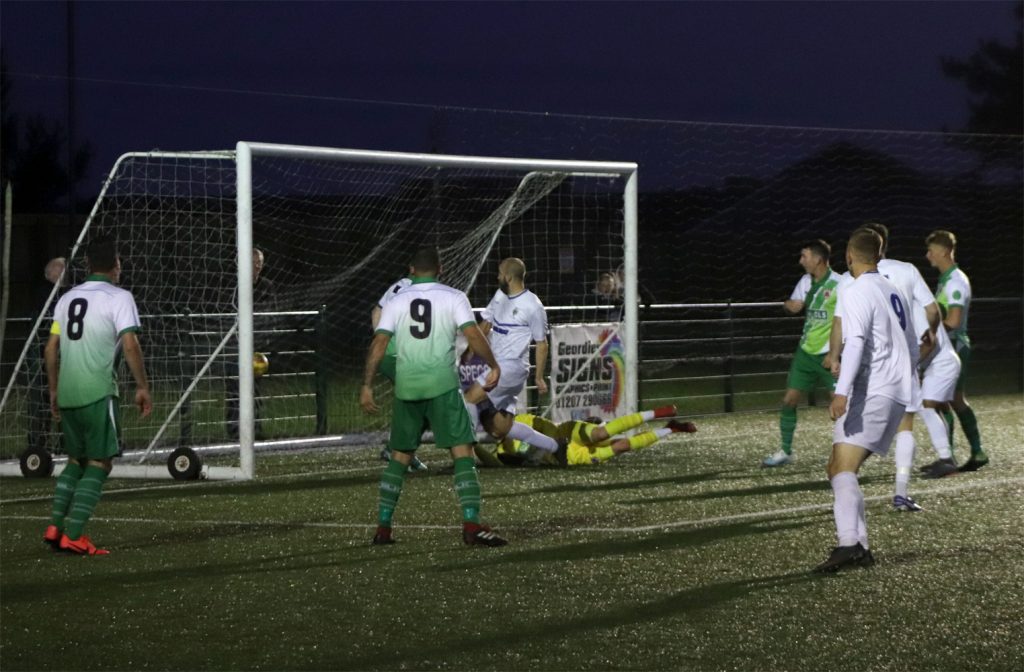 Consett came out 5-2 winners against a Guisborough Town side who at kick off sat one place above the Steelmen in third place. On a still but cool night at Belle View Stadium, the two sides served up a feast of football in a contest of extremely high quality.

The home side posted their intentions right from the off and were two up inside the first ten minutes. First Ross Wilkinson forced the ball home from close range with barely three minutes on the clock (pictured), then Calvin Smith netted five minutes later to keep up his fine goal-scoring record for the season, and make it 2-0.

Guisborough showed they were no mugs when Charlie Marshall shot home from the edge of the area. However, the Steelmen restored their two-goal advantage through Dale Pearson who latched onto Luke Carr’s superb through ball to finish coolly.

Consett led 3-1 at the break, and made it four just after the hour mark when Pearson‘s clever finish from six yards out wrong-footed the keeper for his second of the night.

It was the home side who had the last word though, albeit in fortunate circumstances. Arjun Purewal made a mess of a chance from close range and ball fell to the apparent safety of Guisborough defender Matthew Lovatt. Facing his own goal, however, he inexplicably side-footed into the corner of his own net to make the final score 5-2.

The win momentarily moves Consett up to second in the table, but the Steelmen have played more games than anyone else in the top seven.