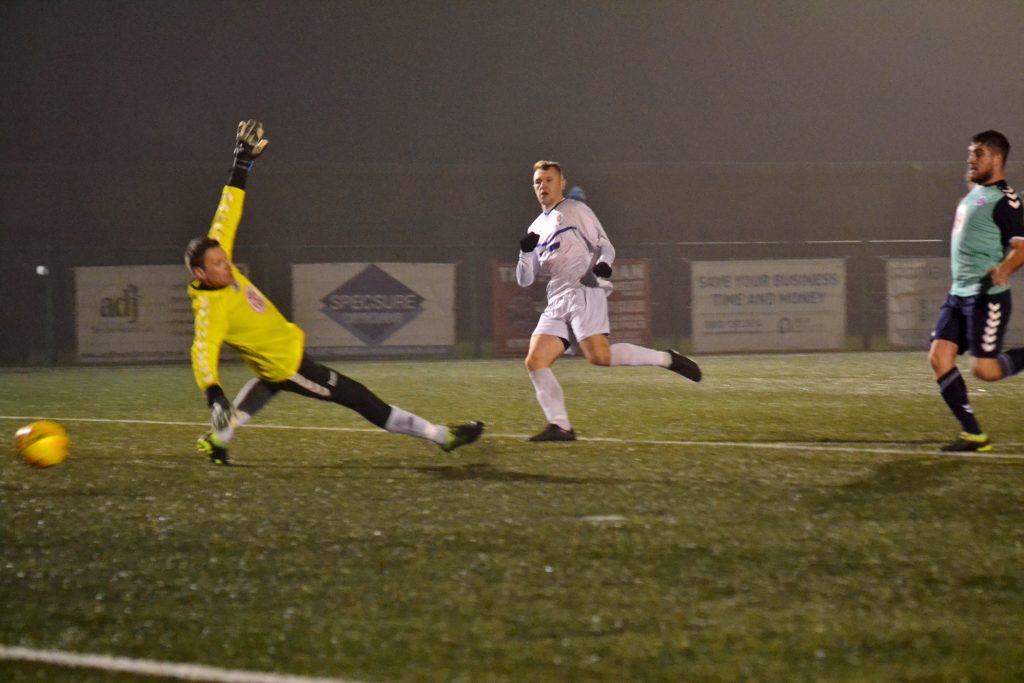 Consett edged closer to Northern League leaders Hebburn Town tonight after a fine second-half performance saw them extend their unbeaten run to 10 games with a 5-1 win over Seaham Red Star.

The Steelmen are now only four points behind the long-time leaders, but they didn’t have it all their own way, particularly in the opening 45 minutes, at a foggy, freezing Belle View.

Darren Holden gave them a slightly fortunate lead after just five minutes, when his deep left-wing cross deceived the keeper and went in off the far post.

Dale Pearson had a chance to double the lead in the 29th minute when Seaham keeper Chris Bannon parried Luke Carr’s shot, but his follow-up hit the post.

The visitors, who’d had a couple of chances themselves, deservedly equalised in the 36th minute when big striker Dan Wilson chested down a pass, outmuscled his marker, and finished at the near post.

All too often Consett were let down by their final pass, and the scoreline remained 1-1 at half-time only thanks to skipper Arjun Purewal, who made a superb last-ditch challenge as Wilson looked set to grab a second goal for Seaham four minutes before the break.

Consett came out for the second half with much more purpose, and were back in front within a minute of kick-off. The ball was moved out wide to Pearson on the left, and his cross was perfect for Calvin Smith to finish from six yards.

It was the midfielder’s 13th goal of the season – his best-ever tally for the club – and he needs only two more to join the exclusive club who have scored 50 or more in our colours.

Consett were playing much better now, and in the 71st minute they got their reward when they went 3-1 up. Jake Orrell was the creator this time, picking out Pearson’s run for the No 9 to fire home his 20th goal of the season from a few yards out.

Two minutes later it was 4-1, as an almost identical move saw Carr’s cross find Holden’s run into the box, for the left-back’s second goal of the game.

The scoring was completed in the 80th minute when an excellent piece of play saw substitute Andrei-Vasile Ardelean collect the ball on halfway, turn his man and slide through a pass which left Pearson with only the keeper to beat. He duly obliged, pictured top, for his 21st goal in 21 games for the club.

Pearson almost completed his hat-trick right at the end when Max Russell, on as a sub after returning from injury, gave him a clear sight at goal, but his left-footed shot flew just over the bar.

A sixth goal would have given Consett their best win of the season, but 5-1 will do nicely, particularly after that stuttering opening half.