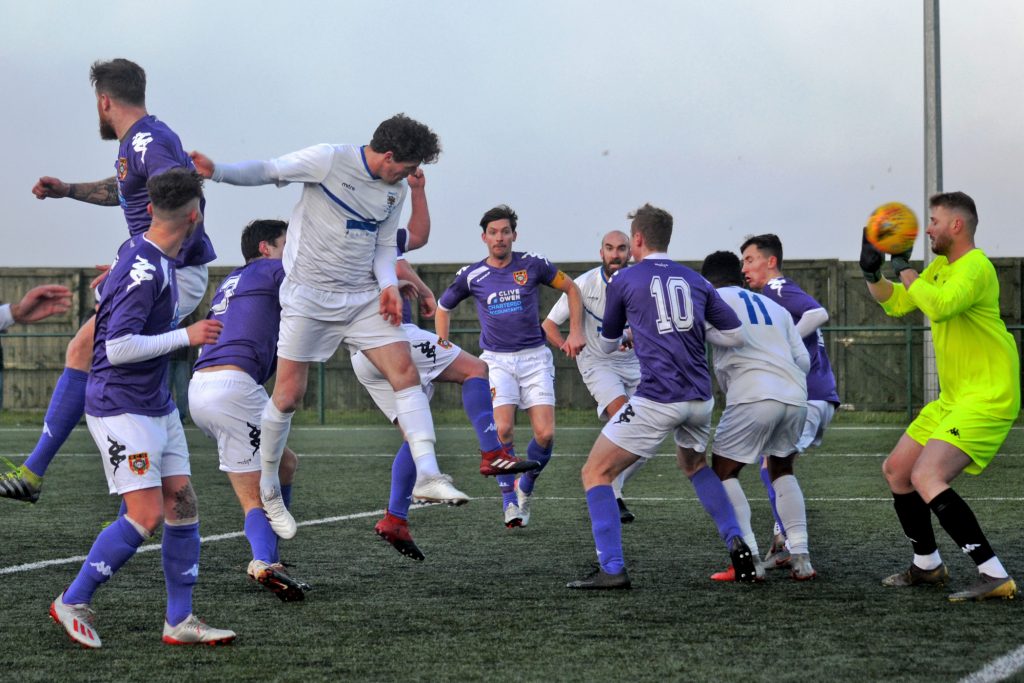 Consett took their unbeaten run to 13 games by hammering Ryhope CW 7-3 at a blizzard-hit Belle View.

The Steelmen raced into a 5-0 half-time lead with a superb first-half performance, but to the visitors’ credit they kept going and ‘won’ the blizzard-hit second half 3-2.

Consett took the lead after nine minutes when Calvin Smith headed his 14th goal of the season, pictured, from Luke Carr’s right-wing corner.

On 13 minutes it was 2-0 when a Carr corner from the opposite side found Dale Pearson, who rifled home to maintain his goal-a-game record.

And on 21 minutes, after good work by Wouter Verstraaten – who was making his first start – and Ali Alshabeeb, Carr set up Dale Pearson to slot home his second goal of the afternoon.

After his hat-trick of assists, Luke Carr got on the scoresheet himself in the 24th minute, curling home a delightful free kick from wide on the right after Alshabeeb was fouled.

And on 36 minutes Dale Pearson completed his second hat-trick of the season when Darren Holden picked out his run with a superb arrowed pass, and the in-form striker beat the keeper to make it 5-0.

Consett began the second half kicking into a fierce wind, but it didn’t stop Ali Alshabeeb making it 6-0 in the 58th minute, with Pearson turning provider.

The goal was the cue for a blizzard, driven by even stronger winds, to begin, and also the signal for an unlikely Ryhope revival.

They made a double substitution after the goal, and one of the new arrivals, Michael Rae, reduced the deficit on 67 minutes.

Five minutes later Consett made it 7-1, as Jermaine Metz cut the ball back for Ali Alshabeeb to claim his second goal of the afternoon.

The conditions were making it increasingly difficult for Consett to get out of their own half, and in the 77th minute Ryhope scored again. Oli Hotchkiss sent a cross over from the left, and it ended up in the far corner of the net, with keeper Kyle Hayes claimed he was impeded as he tried to catch it.

And in the 88th minute Consett gave away possession deep in their own penalty area, and Jon Weirs took advantage to make the final score of a remarkable game 7-3.