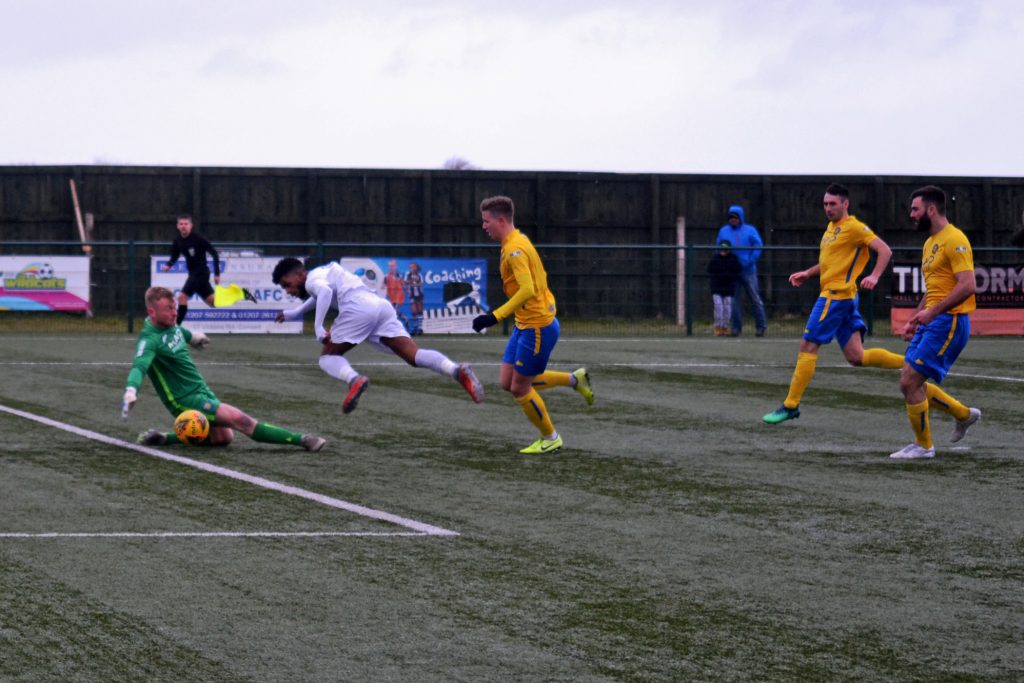 Consett fell just short in their bid to put a spoke in the wheels of Stockton Town’s runaway surge towards the Northern League title today, going down 2-1 at a gale-lashed Belle View.

Trailing the league leaders by two goals at half-time, the Steelmen put on a fine second-half performance which just failed to overturn the deficit.

The game kicked off in very windy conditions which were verging on making a sporting contest farcical, and within the first 10 minutes the referee had a discussion with both managers over whether the game should continue.

They decided it should go on, and Stockton, kicking into the fierce wind, took the lead on 22 minutes when Consett lost possession. The ball fell to Jonathan Franks, who fired home from eight yards to make it 1-0.

Four minutes before half-time the visitors, who were backed by two busloads of fans, doubled their advantage, as Kevin Hayes finished from Franks’ pass after Consett lost the ball in their own half.

Kicking into the wind in the second half, the odds seemed to be against a Consett comeback, but they were given hope just three minutes in when Ali Alshabeeb latched onto a long ball and held off the challenge of Lewis King before rolling the ball past the keeper for his 13th goal of the season, pictured above.

It was just the 14th goal Stockton have conceded in 27 league games – and two of the previous 13 came in our 2-2 draw at their ground back in September.

Ten minutes later overlapping full-back Jermaine Metz had a chance to level, but scuffed his shot from Jake Orrell’s pass.

Stockton keeper Callum Roberts then made a fine double save, getting down well to save Jake Orrell’s well-struck effort from the edge of the box, then quickly recovering to thwart Dale Pearson’s follow-up.

Metz had another chance, which he blazed over the crossbar, and in the 84th minute Roberts pulled off what turned out to be a matchwinning save, somehow keeping out Pearson’s powerful header from Alshabeeb’s cross.

Try as they might, Consett couldn’t breach Stockton’s superb defence again, and it was the champions-elect and their big travelling support who were celebrating at the end as they went 15 points clear at the top.