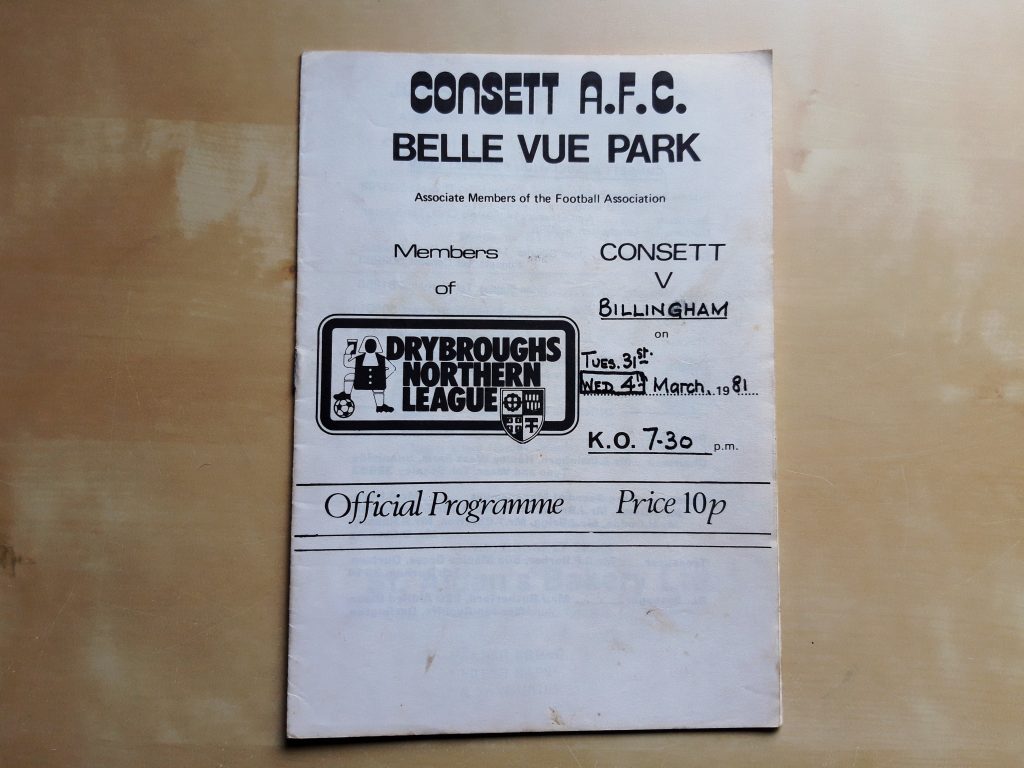 Consett have been famed cup fighters over the years, but one competition where they didn’t enjoy much success for many years after joining the Northern League was the League Cup.

All that changed on this date in 1981, when, despite it being an otherwise nondescript season, they reached the League Cup final for the first time, with a 2-1 semi-final win over Billingham Synthonia at our old Belle Vue Park ground.

Synners were proving to be one of the teams of the season as far as cups were concerned. After enjoying a good run in the FA Trophy, they also reached the semi-finals of the Durham Challenge Cup.

They had beaten South Bank on penalties and Ashington to reach the League Cup semi-final, while Consett had knocked out Durham City and North Shields. The match was originally scheduled to be on March 4, but was postponed until 31st.

The match programme warned: “The winning of tonight’s match is vital if Consett are to retain any major interest in proceedings up to the end of the current season.

“Our current lowly league position [they were 13th] can certainly be improved upon, but how nice it would be for all connected with our club if we could go on and win our first trophy since our entrance to the Northern League 11 years back.

“Perhaps the biggest disappointment to our supporters this season has been our inability to score goals, a trait seldom missing from Consett performances over the past seasons.

“Although missing 8 games this season, Terry Breen has been the only player to equal the scoring records of past players such as Kevin Cross, Steven Newstead, Dave Rutherford and Bobby Parkinson.

“Another factor contributing towards this season’s poor results has been the excessive injury problems thrust upon us for the second season running. At no period throughout the past two seasons have we been able to give any selected side a prolonged run of matches.”

Just as important as the result was the fact that the tie guaranteed £200 prize money for the winners, and the chance to pick up another £600 if they managed to lift the trophy, or £400 for being runners-up.

Despite their goalscoring problems, Consett went through to the final of the league cup – known for this season only as the Turney Wylde Cup for sponsorship reasons.

Their former West Brom striker Barry Donaghy opened the scoring in the first half, but Steve Griffiths equalised for Billingham eight minutes into the second half.

It was fitting that it was long-serving skipper John Swinburn – in his ninth season with the club – who grabbed the winning goal six minutes from time.

Consett – whose club colours at the time were all tangerine with black trim – went on to face Spennymoor United in the final at Blyth Spartans’ Croft Park ground, but lost 2-0.