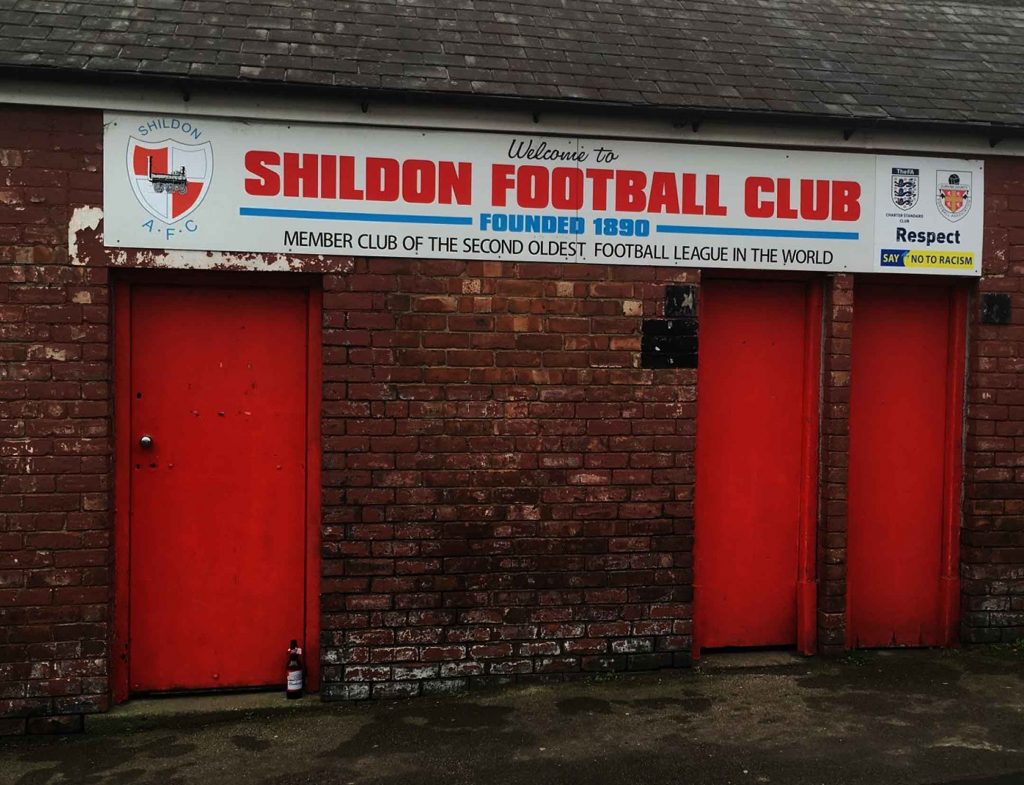 We were supposed to be hosting Shildon in a league game at Belle View Stadium tonight, until the coronavirus outbreak caused all football to be halted and the FA to declare our season null and void.

If the game had been taken place, it would have maintained a remarkable record of the Steelmen facing the Railwaymen – as we have on the last three times we have played on this date, going back 30 years!

The first was on 7 April 1990 when we travelled to Dean Street in the Northern League 1st Division. Unfortunately, no match report from the game exists in the club archives, but you probably didn’t miss much, as it was a 0-0 draw.

Incredibly, the next time we played on 7 April wasn’t until 2012, and again we placed Shildon, this time at our old Belle Vue Park ground.

Few could have foreseen the outcome of the match against fellow mid-table opponents, particularly after one of the best performances of the season at Norton just three days earlier.

After taking the lead through one of the club’s youngest-ever goalscorers, Consett conceded a soft equaliser and went on to suffer their joint-worst defeat of the season.

Manager Kenny Lindoe gave 16-year-old Ryan King his full debut, and he gave Consett the lead in the 26th minute. The young striker – 20 days short of his 17th birthday – hit a near-post shot from Lewis Teasdale’s cross which was judged to have crossed the line before it was cleared from the crowded goalmouth.

However, Shildon equalised six minutes before half-time when Danny Richmond’s cross from the left found centre-forward Billy Greulich-Smith at the back post, where the lanky former Hartlepool United striker headed home unchallenged.

Less than a minute into the second half Shildon were ahead, and it was down to un uncharacteristic mistake by Consett skipper Carl Piecha. He trod on the ball, surrendering possession to Sam Garvie, and the nippy winger sped away before slotting past the exposed Peter Jameson.

Conceding a goal so early in the half knocked Consett’s confidence, and Shildon began to take control. On 73 minutes their pressure paid off when they went 3-1 up. Robbie Clarkson’s right-wing corner was headed down by Richard Flynn, and Greulich-Smith converted from barely two yards out.

As full-time approached, Shildon scored a fourth goal through sub Nicky Kane, who ran from the centre circle right through the middle of the Consett defence, before slotting easily past the exposed Jameson. And two minutes into added time, Greulich-Smith completed his hat-trick from the penalty spot to make it a miserable afternoon for Consett.

Our most recent 7 April outing was another trip to Dean Street, towards the end of the 2017-18 season, when two late goals cost Consett the point they deserved as they lost 2-0 on a very muddy pitch.

The Railwaymen gained revenge for their recent defeat on penalties in the Durham Challenge Cup semi-final by taking three points with goals from Adam Burnicle and Kyle Patton in the 89th and 91st minutes.

The Shildon groundstaff had worked wonders to get the game on, as it resembled a duck pond more than a football pitch in midweek. And despite a pre-match deluge, which left the pitch on the heavy side, with one or two puddles, the referee was happy to let the game go ahead.

After a cat-and-mouse opening, the game opened up, but both goalkeepers made good saves. Consett’s Kyle Hayes – playing against one of his former clubs – saved well from Adam Burnicle (twice) and Matty Waters, while Shildon’s Nick Liversedge denied Michael Sweet (twice) and Calvin Smith.

Half-time was reached with the score at 0-0, and the longer the game went on, the more it looked like it would finish that way. Both sides brought fresh legs off the bench in an effort to break the deadlock, and in Consett’s case this meant a first meaningful appearance in two months for David Dowson as he returned from injury.

Consett thought they had a good shout for a penalty on 78 minutes when Dowson appeared to be pushed over from behind, but the referee waved play on, and Shildon broke, only for sub Brad Hird to blaze wide after Ross Wilkinson did well to block his path to goal.

Two minutes later there was a let-off for the Steelmen as Hird’s deflected shot struck the base of the post. Clark Kay then made an excellent last-ditch tackle to deny Burnicle as he burst through with the goal at his mercy.

With the game entering its dying stages, it was going to take something special to win it, and it came in the 89th minute when Billy Greulich-Smith played a ball through the middle for Burnicle, who rode two challenges before slotting past Hayes to make it 1-0.

The Shildon players were elated to breach the resolute Consett defence for the first time in three meetings in this season, and they did it again a minute into injury time as the Steelmen pushed forward in search of an equaliser. Burnicle was the creator, powering down the right, and Kyle Patton finished at the back post.

2-0 was a cruel scoreline on a Consett side who felt they deserved a point after a hard-working performance.