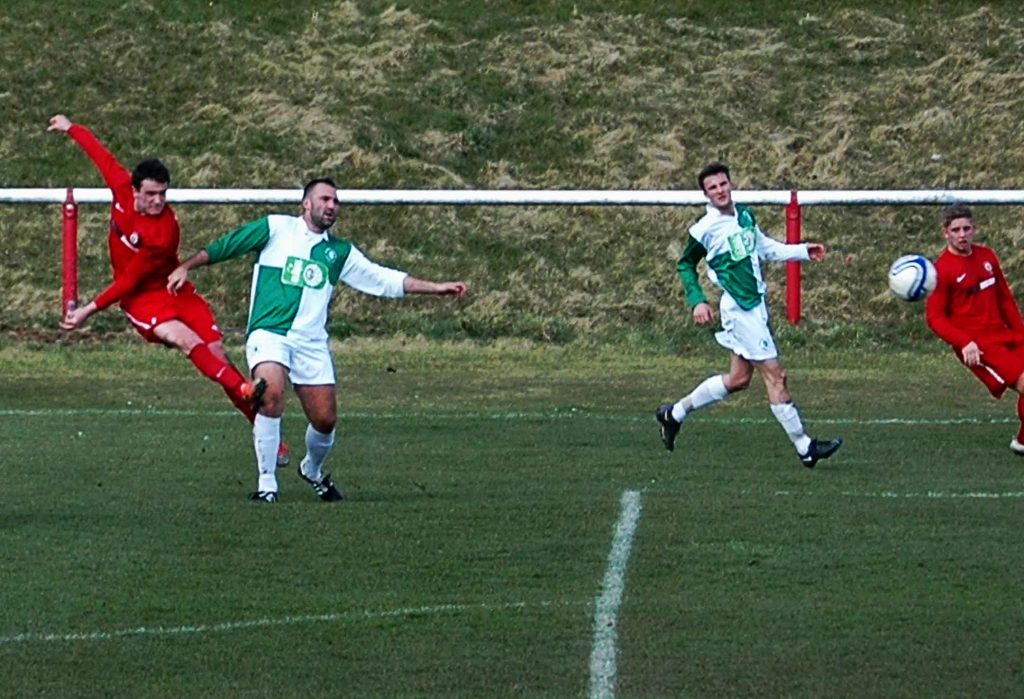 Consett’s excellent recent form continued on this day in 2013 as they ran out comfortable 4-1 winners against Billingham Synthonia at a sunny Belle Vue Park, with their eighth win in 11 games never in doubt from the moment Luke Sullivan drilled home the opener midway through the first half.

Manager Kenny Lindoe made just one change to the side which had beaten Sunderland RCA three days earlier, Matty Slocombe returning in place of Anthony Lund. A youthful-looking Synners side included one popular ex-Steelman, Steven Huggins, in an unfamiliar right-back position, though there was no sign of their other one, Andrew Burton.

After a tentative start on a lively pitch, Consett gradually got into their stride, and Slocombe had the first attempt on goal on eight minutes, picking the ball up outside the box but firing his shot a couple of yards wide.

Aris Guerin-Lokonga then had a shot blocked, and Jack Stanger’s follow-up whistled wide. When Stanger was inches away from getting on the end of a free-kick whipped in by Ian Davidson from the right, a goal looked on the cards.

In-form striker Luke Sullivan then had the best chance yet when he timed his run onto a right-wing Calvin Smith cross perfectly, but put a weak header straight at the keeper Tim Griffiths.

The breakthrough wasn’t long, however, and it came on 21 minutes, thanks to some good link-up play between Consett’s two forwards. Guerin-Lokonga won possession midway in the Synners half, held off a challenge, and fed the ball to Sullivan on his right. A toucvh took him past his marker, and he finished confidently for his fourth goal in three games.

A few minutes later Consett suffered a blow when they lost Stanger with an ankle injury, but Andrew Cuthbertson came on in a straight swap, and their momentum wasn’t affected. Sullivan was clearly in the mood for more goals, and he came close after a pass into the right-hand channel saw him flash a shot across the face of goal. Then it was Cuthbertson’s turn to come close, timing his dash to the back post a fraction too late after Michael Pearson fired just wide from Guerin-Lokonga’s pull-back.

The second goal came four minutes into added time at the end of the first half, when another pinpoint Davidson free-kick from the right picked out Guerin-Lokonga at the back post, and he headed back across the keeper into the far corner.

Consett were well worth their 2-0 half-time lead, but four minutes into the second period they gifted their visitors a way back into the game, when they gave away a penalty. Aidan Cattermole got in behind the Steelmen’s defence, and was adjudged to have been tripped as he shaped to pull the ball back from the byline. Danny Newby made no mistake from the spot to give the visitors a lifeline they scarcely deserved.

Just after the hour mark the game was as good as over, however, when Sullivan got his fifth goal in three games with a piledriver of a free-kick from 25 yards, which Griffiths could help into the top corner.

Seven minutes later Slocombe made it 4-1 to Consett, rising highest at the back post to power home Pearson’s excellent cross from the right, and it was game over. Both sides rung the change in the last quarter of the game, with Consett bringing on Liam O’ Mahoney for the ever-present Smith, who was playing his 50th game of the season, and Steven Aiston for Guerin-Lokonga, whose goal was his sixth in eight games.

Consett enjoyed the lion’s share of possession without creating too many clear-cut chances, but it the home fans went home happy after seeing their team register their fifth win in 10 days, and climb to a seasonal high of eighth in the table.

A backlog of games would catch up with them, however – they still had seven to play, with six of them at home – and they finished 9th, with Synners three places behind them.

Darlington 1883 ended up as the runaway league champions with 122 points, while Spennymoor Town were runners-up with 109 – more than they amassed in their four championship-winning seasons!