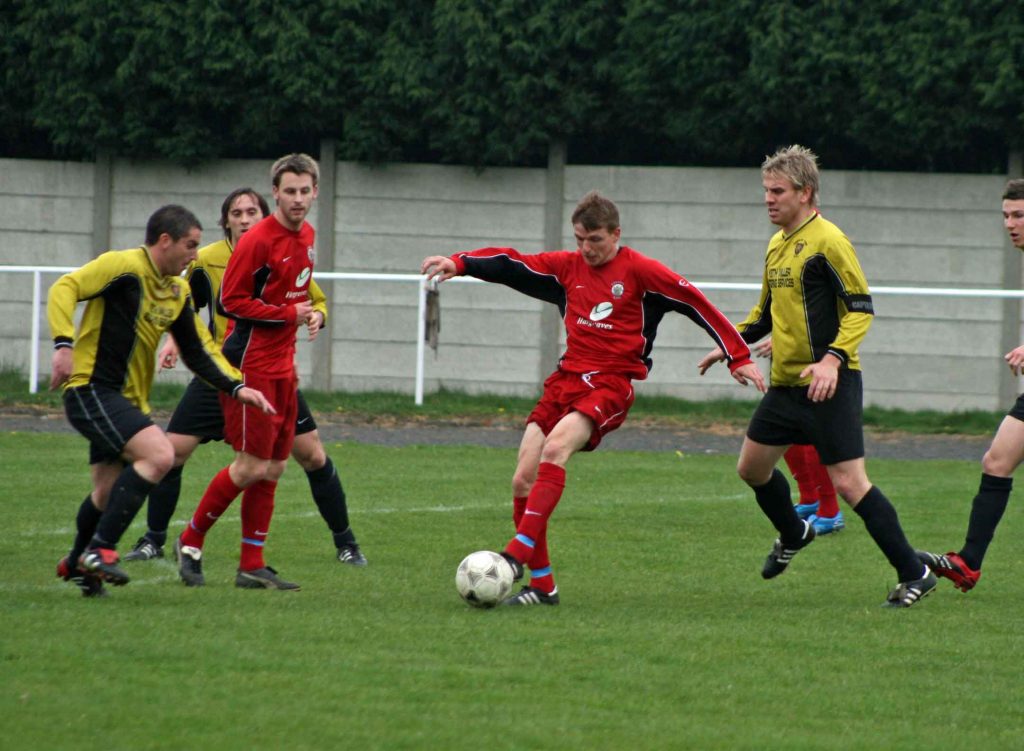 Consett brought down the curtain on their Arngrove Northern League Division One campaign with an unspectacular draw at the Craik Park home of Morpeth Town on this day in 2007.

The Steelmen were guaranteed a fourth-place finish regardless of the outcome and consequently found themselves coming into the final game with nothing directly to play for for the first time in six seasons.

With their hosts having one eye on a Northumberland Senior Cup Final against Blyth Spartans at St James’s Park, the scene was set for a less than full-blooded contest!

There was only one change in the starting XI from the side that had lost at home to Billingham Town the previous Wednesday. Recent signing Steven Johnson, pictured top, came in for his first start for Consett, with injury doubt David Johnson making way for him.

Morpeth took the lead in the 10th minute with a goal that caught the Consett rearguard cold. Paul Wilary floated a ball into the area and as the red defensive line stood still appealling for offside, Stephen Young ghosted in behind them to prod home from six yards.

The Steelmen were level 11 minutes later thanks to a well-worked goal. David Pounder sent a cross to the back post towards Gary Ormston, who side footed the ball back across goal, leaving Steven Johnson with the easiest of close range tap-ins to open his goal account for the club.

The remainder of the half was a generally tepid affair played out in near silence in front of a tiny crowd. Morpeth’s Paul Haxon went close with a header and substitute Paul Dunn saw a speculative effort go wide, but neither keeper was particularly troubled.

The second half was a bit livelier and Consett survived a scare four minutes after the break when a sustained period of pressure on their goal culminated with Damien Mullen shooting across goal and inches wide.

Consett responded immediately though and took the lead 45 seconds later. Jonjo Dickman sent a free kick to David Pounder on the left, and he drilled in a low cross which Ian Robson converted at the back post.

The Steelmen ought to have made the game safe in this stage of the game as Pounder chested the ball down before driving it just over. Then on 54 minutes man-of-the-match Pounder embarked on a jinking run before firing in an effort from 22 yards which cannoned against the crossbar.

An injury to Jonjo Dickman in what was probably the only bad tackle in the whole game seemed to disrupt Consett badly, and within two minutes of his departure Morpeth were level. David Turner sent a long deep cross in to the Consett six-yard box and Young stole between the defenders and the keeper to volley home from close range.

Both sides upped the tempo in an attempt to end the season with a win and in the 72nd minute Ian Robson set up Johnson, whose left-foot strike was tipped over the bar by Poskett. At the other Young pounced on a poor defensive header, but sliced his shot wide.

With six minutes remaining and a draw seemingly inevitable, referee Russell Tiffin, in his final appearance before retirement, provoked one last moment of controversy.

Young tried unsuccessfully to connect with a far post cross between two Consett defenders, however to the surprise of all parties Mr Tiffin decided that he had been impeded and awarded the home side a penalty. Young himself stepped up to try to complete his hat-trick, but blasted the spot-kick wide and the match ended in a fitting draw.