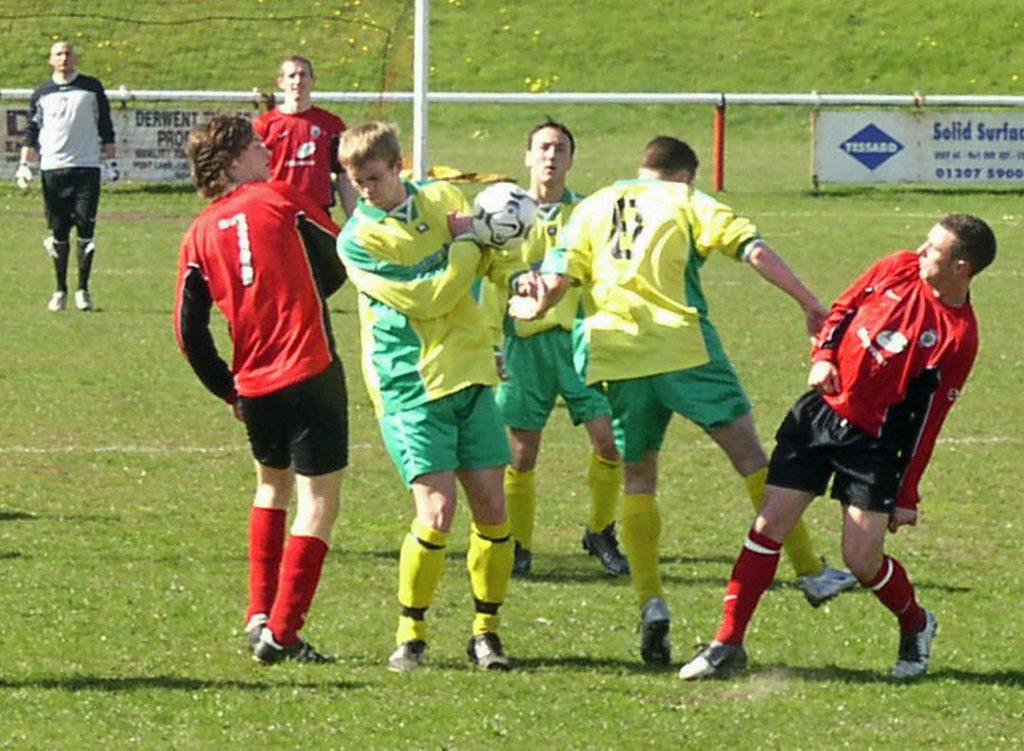 Consett recorded another fine win – their 32nd of the season in the league – as club records continued to tumble on this day back in 2006.

But the 5-0 win over Whickham at Belle Vue Park on this day took them to within one point of the magic 100 in an incredible 2005-06 campaign, and was the 17th game in which Consett had hit five goals or more.

Kenny continued to rotate his squad to ensure it was used fully during the hectic final month of the season. Gary Ormston, Robbie Blemings and Scott Macdonald returned to the side in place of Colin McKenzie, Paul Curry and Kraig Wilkinson as the Steelmen adopted an attacking 3-4-3 formation.

The game was played in pleasant spring sunshine and had something of an end-of-season feel to it in the first 25 minutes. Neither keeper was unduly troubled, with a long-throw move from Whickham that John Mohan gathered easily and a Damian Maw effort that cleared the visitors’ crossbar the only incidents of note.

Consett opened the scoring in the 26th minute with something of a bolt out of the blue. Robbie Blemings took possession of a loose ball just inside his own half and carried it forward unchallenged for some 30 yards. Having been virtually invited to shoot the young defender did so, finding the bottom corner with a powerful strike from distance.

The goal handed the initiative to Consett, and they never for one moment looked like giving it up. After Andrew Bulford volleyed a punched clearance from Robinson back over the bar, the Steelmen doubled their lead on 36 minutes.

Bulford produced some great work down the right flank before putting over a cross and Robinson’s punch was again ineffective. The ball fell to Carl Piecha who sent a spectacular left-footed strike into the net, despite facing away from goal and the ball bouncing at about shoulder height.

On the stroke of half time Consett added a third, and once again it came gift-wrapped courtesy of the generous Whickham defence. Michael Mackay crossed from the left and found Bulford, whose shot somehow squirmed through Robinson for his 13th Consett goal.

Any hopes the visitors may have had of clawing their way back into the game were soon dashed as Consett netted twice more in the opening four minutes of the second half. Kraig Wilkinson made it 4-0 with his first touch after coming on as a substitute, reacting well to reach Bulford’s off-target volley and steer it home from the edge of the six-yard box.

Consett went nap on 49 minutes when Piecha’s cross was only partially cleared and the referee spotted the use of a Whickham hand in the melee that followed. Mackay converted the resulting penalty for his 40th goal of the season – two of which having been scored for Durham City.

Indeed, Mohan was forced into making his first real save of the match within two minutes of Consett’s fifth, denying Andrew Elliott a headed goal. Bulford went close on the hour mark, before the crowd were given the rare chance of seeing a goalkeeper score from open play. Consett were awarded a free-kick just outside the area, which Mohan travelled upfield to take, but his shot was deflected wide. From the corner, Mackay sent a glancing header just wide.

Whickham’s best chance came on 73 minutes when Richard Brodie rounded Mohan and played the ball across to substitute James Ramshaw. The ball was behind him, but somehow the former Consett player scooped the ball wide from a yard out.

At the other end, chances were raining in on the Whickham goal with Alan Oliver, Mackay, Bulford and Blemings all going close in the space of five minutes. As the game entered the final 10 minutes, Blemings was in action in defence, getting back to block Graeme King’s shot with Mohan beaten.

Three minutes from time Mackay used his strength to create space for a shot, but was denied another goal for impressive collection by a brilliant one-handed stop from Robinson. Then, with time almost up, Chris Douglas saw a dipping volley go just over the bar, and the Steelmen knew they were just going to have to settle for five.

Their final game, two days later against FA Vase quarter-finalists Crook Town, saw the Steelmen end their record-breaking campaign with a 2-1 win, which gave them an incredible 102 points from a 38-game season, and a final goal difference of +103.