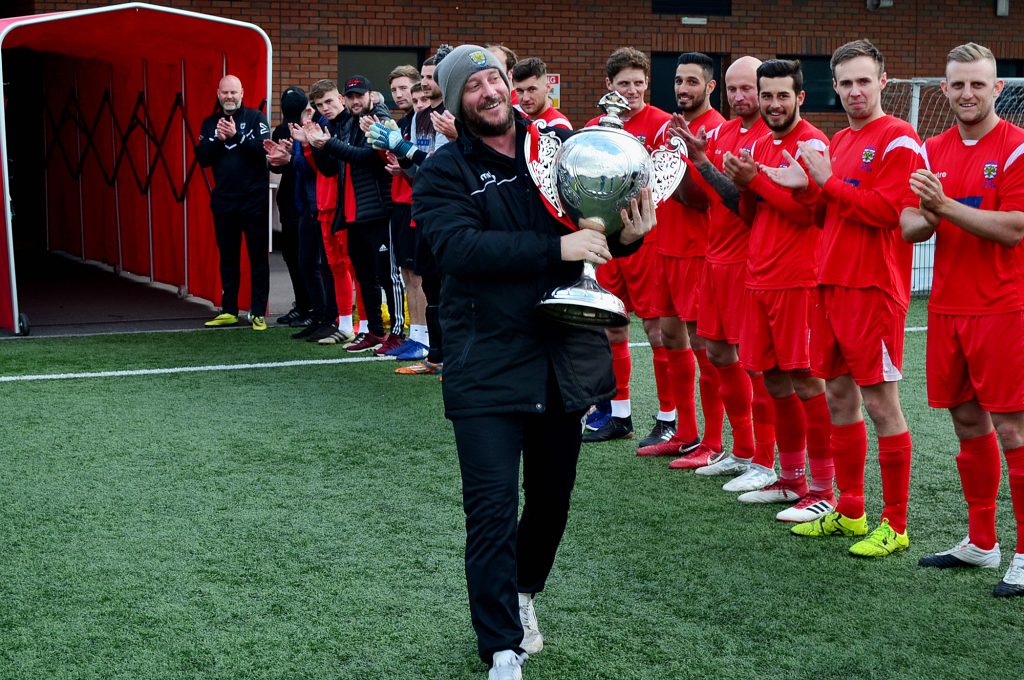 Ecca, who was getting married and relocating to Scotland, was given a guard of honour by both sets of players before the game, pictured top, as he walked onto the pitch with the Durham Challenge Cup, which his team had won the previous week.

And he left the field after the game with chants of ‘Mark Eccles’ Conny Army’ ringing in his ears after his side demolished their already-relegated opponents.

Top scorer Michael Sweet set the ball rolling after 17 minutes when he latched onto Calvin Smith’s ball over the top to score his 41st goal of the season, and 99th for the club.

On 25 minutes it was 2-0 when David Dowson won possession 10 yards outside the Washington box and played in Jordan Lavery, who finished confidently.

On the half-hour it was 3-0 as centre-half Ross Wilkinson drove forward on a mazy run from the back and the ball fell for skipper Danny Craggs to fire home from 12 yards.

Seven minutes into the second half left-back Clark Kay laid the ball on a plate for Sweet to score his second of the night and his 100th Consett goal with a hard, low cross into the six-yard box.

Washington had a very young side, plus a couple of older heads in Alex White and former Sunderland and Tottenham star Pascal Chimbonda, and to their credit they never gave up.

They got a goal back on 62 minutes when Jak Hanson got in behind the home defence and lobbed Kyle Hayes to make it 4-1.

But the Steelmen made them pay for their temerity with three goals in the next five minutes.

On 63 minutes Sweet unselfishly squared for Craggs to score his second of the night, and a minute later Adam Male’s incisive pass gave Craggs the chance to complete his hat-trick.

Then on 66 minutes the hard-working Dowson set up Sweet for his treble, which made it 7-1, and 43 goals for the season for the popular striker.

Nathan Convery thought he had his first goal for the club on 72 minutes, but it was ruled out for offside, while Jonathan Toward hit the post for Washington and Dowson did the same for Consett as the chances continued to flow.

The final word went to Dowson in added time when Craggs set him up to make it 8-1 with his 15th goal of a season which might have delivered even more if he hadn’t missed two months of it through injury.