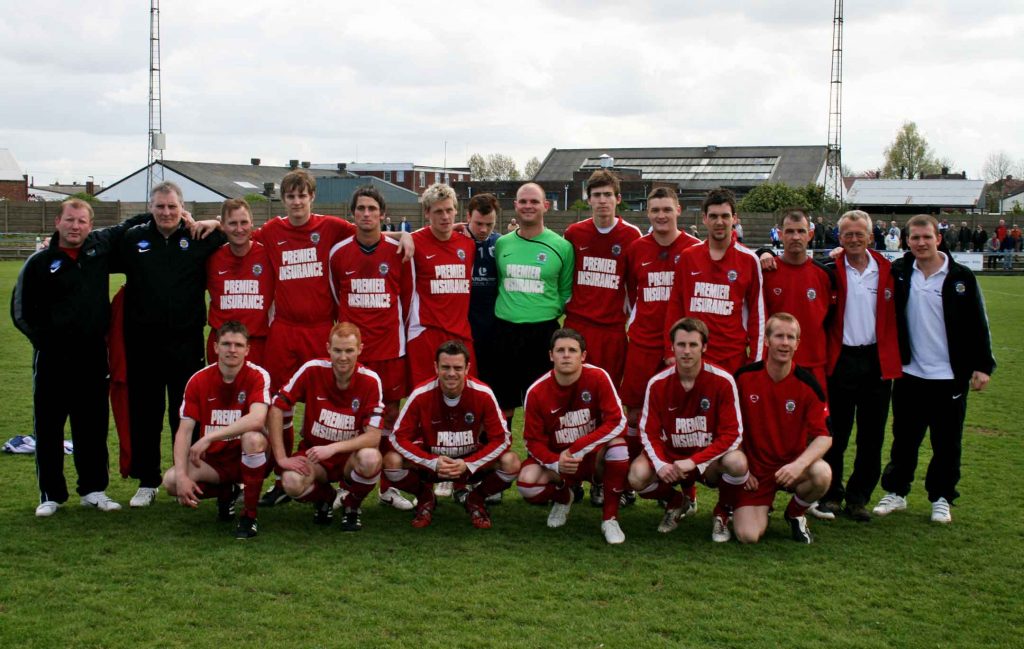 Consett came agonisingly close to clinching a first-ever Northern League title on this day in 2009, only for a defeat at the hands of Wembley-bound Whitley Bay to leave their fate in the hands of others.

It all looked so promising as Consett led 2-0 at Hillheads at half-time. However, the Steelmen were left stunned by a spirited fightback by their hosts, culminating in a dramatic late winner.

In front of a crowd of 599, the highest to see a league game involving Consett for many a year, Kenny Lindoe’s side took the field having been dealt a setback even before the kick off. Keeper Jack Norton dislocated a finger during the warm-up, meaning Paul Gilmore was pressed into service between the sticks.

Any thoughts that this might be a nervous encounter with few goalmouth chances were dispelled quite early on. On a sunny spring day with the pitch in immaculate condition, the stage was set for a classic Northern League encounter.

Consett were first to threaten when Adam Emson teed up Chris Scott who saw his firm drive from just outside the area saved by Bay keeper Terry Burke.

On the quarter-hour mark Whitley produced their first chance of the game when Adam Johnston, spotting Gilmore off his line, tried an audacious chip from the edge of the centre circle, which went just over the bar.

The game continued in an end-to end fashion and after Emson had sent a David Pounder through ball over the target on 26 minutes, play switched immediately to the other goal as Phil Bell sent a 25-yard daisy cutter inches wide.

It was Consett who finally found the net just before the half-hour mark. There was an element of good fortune about it as a Pounder cross caused problems in the Bay area, and although the keeper got to it ahead of Emson, indecision between Burke and an incoming defender allowed Steven Johnson to fire into the unguarded net.

Whitley almost struck back immediately, however Paul Chow shot over under pressure from Carl Piecha. Then on 33 minutes, Burke just beat Johnson to a through ball, with the Consett striker catching the keeper as he cleared, earning a yellow card for the challenge.

Two minutes before the break, a Consett side visibly growing in confidence as the half wore on took what looked like a decisive two-goal lead. Gary Ormston played in Jonjo Dickman, whose shot fizzed across the goal and rebounded off the post. The ball was played back in by Pounder to Emson, who outpaced his marker to make it 2-0 with a great finish.

Whitley boss Ian Chandler no doubt took the opportunity at half-time to remind his charges that FA Vase final places were by no means guaranteed, and the home side started the second half like men possessed.

They took just four minutes to halve the deficit with a goal of classic simplicity, Paul Chow glancing Lee Kerr’s corner in at the near post.

Consett suddenly looked very vulnerable, and after Johnston had seen a shot from just outside the area deflected wide, Bay drew level in the 57th minute. Johnston drilled in a low free-kick from 20 yards out which took a deflection before Bell stabbed it home from close range.

On 61 minutes another Kerr corner found Chow, who this time directed a free header wide. Consett produced their first chance of the second half soon after when Scott’s trademark 25-yard low drive was stopped by the keeper who couldn’t hold onto the shot, but was able to grab it at the second attempt, with no-one in a red shirt following up.

The tension was starting to mount as the half wore on, and 15 minutes from time passions boiled over as Kerr and Pounder found themselves in the referee’s notebook following a head-to-head confrontation. Almost immediately after that Emson saw a shot blocked, and although Pounder was first to follow-up he flashed his effort wide.

With the clock running down it looked like the Steelmen might hang on for the point that would have virtually clinched the championship. However, Whitley had other ideas, and six minutes from time substitute Chris Reid broke down the left and played the ball across area to fellow-replacement Chris Moore, who had all the time in the world to control it, pick his spot and break Consett hearts.

Consett threw everything at Bay in search of that elusive title-winning point, and with the clock ticking round to 90 minutes Emson saw a dipping volley go just over. Then three minutes into stoppage time sub Richard Logan fired in a strike from just outside the box, but Burke got down well to save.

Moments later the final whistle blew on Consett’s season. News filtered through that title rivals Newcastle Benfield had won 5-1 against West Allotment Celtic, which means everything comes down to the last game of the season … Penrith v Benfield on Tuesday night.

The equation was very simple, a win for Benfield meant the title would go to the East End of Newcastle, anything else and Consett were champions. All the folk from Belle Vue could do was cross their fingers and hope.

Agonisingly, the Penrith v Benfield game three days later looked like it was heading for a goalless draw, until seven minutes from time, when Stephen Young snatched a winner for Benfield, to give them their first title, and leaving the men from Belle Vue to ponder what might have been.

And although we were runners-up in three of the next four seasons, and led the table for more than half of the 2018-19 campaign – ironically under the management of Chris Moore, who scored Whitley Bay’s winning goal in this game – we have never been as close again to winning the league.