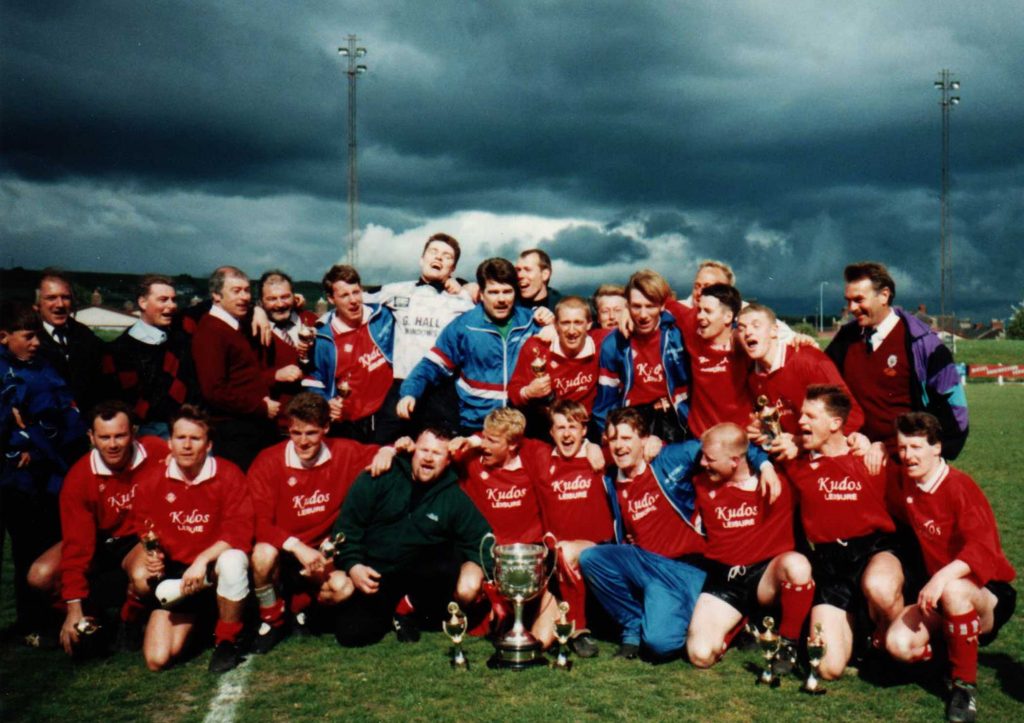 Consett won their first major trophy for 26 years on this day in 1995, enjoying a comfortable victory over favourites Whitby Town in the Northern League Cup final.

And it was fourth time lucky for the Steelmen, who had been beaten finalists in their previous three finals, in 1979, 1981 and 1992.

It was the second trophy which long-serving manager Colin Carr would deliver to Belle Vue Park, following the 2nd Division championship in his first season, 1988-89.

And it would pave the way for further success, with a run to the 1st Round proper of the FA Cup in 1996, and a Sunderland Shipowners Cup win in 1998 (recalled here).

Although Consett had finished a creditable 9th in the season just ended, they were up against one of the Northern League’s big guns of the time.

Whitby had just missed out on being league runners-up by goal difference, and had recorded their fifth consecutive top-six finish, which included being crowned champions in 1993.

They had enjoyed the upper hand in the two league meetings between the sides during the season, winning 2-0 at the Turnbull Ground the previous October, with the return match at Belle Vue in March ending 1-1.

So for although by the time of this game, played at Crook Town’s Millfield, Consett were an established 1st Division side, they went into it very much as underdogs.

And, as Ian Hamilton (who was club secretary at the time) revealed this week, the Steelmen’s preparations for the game weren’t exactly orthodox.

He said: “The Consett squad had just endured their end of season booze-a-thon, which was a two-day booze-filled weekend at Southport.

“I think 9 of the squad for the cup final were on that trip and there were no beer shirkers! I don’t know how the lads managed to even turn up for that game, never mind win it!”

But win it they did, despite having a scare early on, when Paul Quinn had to clear an effort off the line after goalkeeper Dickie Lee had made a fine save.

David Bayles shot into the side netting after 22 minutes, and then his pass put Gary Cowley in the clear six minutes later. ‘G.C.’ lobbed the ball over the keeper, but unfortunately also over the bar.

Robinson headed just over for Whitby after 29 minutes, and then a mistake by Johnny Brown let Robinson in, but Lee again came to the rescue with a good save.

Consett made the vital breakthrough three minutes before half-time. Colin McLeod made a good run down the left and his excellent pass found Paul Staff, who drew the keeper before firing into the net from 10 yards.

Whitby went close after 52 minutes when Lee saved from Pitman, but the expected pressure from the Seasiders failed to materialise, as they strangely lacked urgency.

McLeod forced a save from keeper Robinson after 68 minutes, and then Consett clinched the game with 13 minutes left on the clock. Carl Rowell latched onto a loose ball to superbly lob it over the advancing keeper and make it 2-0.

There was almost a third goal two minutes later when substitute Gary Davies shot narrowly wide after playing a one-two with McLeod, but it mattered not, as Consett held on for a comfortable win.

Skipper Gary Cowley collected the League Cup – their first major honour since 1969 – from MP Hilary Armstrong, and then the celebrations could really begin!