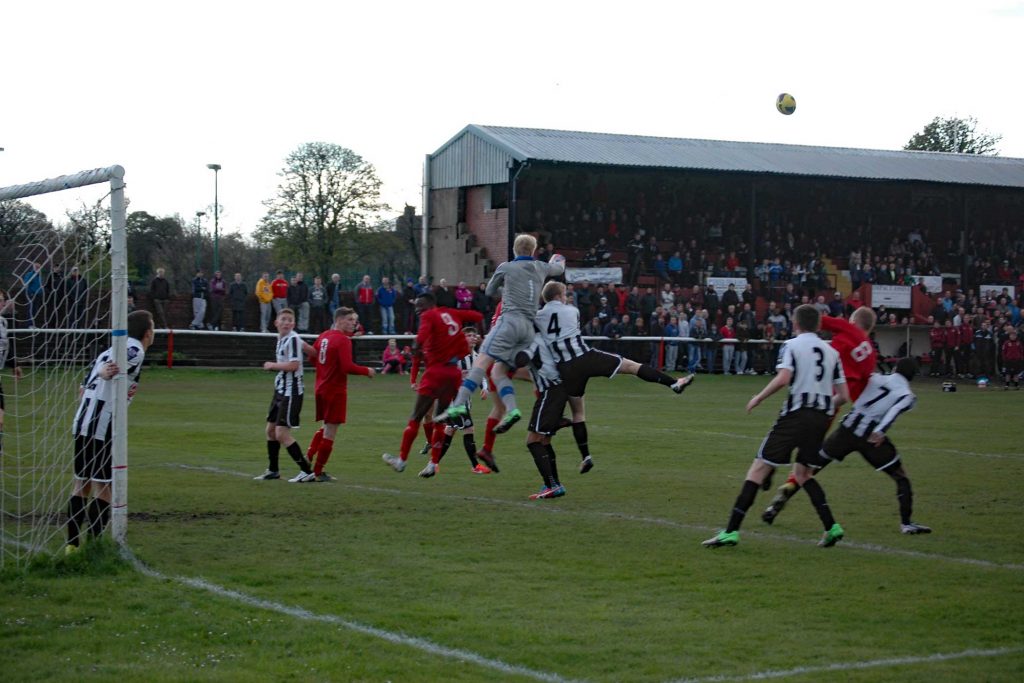 Consett said goodbye to their crumbling old Belle Vue Park ground on this day in 2013, but a strong Newcastle United XI proved to be party poopers by winning 6-0.

The result wasn’t important, however; the evening was all about giving Consett fans the chance to watch their team at their home of 63 years for the last time.

After a decade of delays, legal wrangling and false starts, the Steelmen were at last leaving the ground, which had been built by voluntary labour from the town’s steelworks just after the Second World War.

Much-loved and admired though the ground was, it’s fair to say it had seen better days; its infrastructure had been deteriorating for years, and the club was constantly having to spend hard-earned money on repairing the worn-out facilities – “we were just fighting one fire after another” as former chairman John Hurst put it.

A new purpose-built stadium at Crookhall, complete with a 3G pitch, was waiting for the club, in exchange for giving up the remainder of their 99-year lease on the ground.

But first they had to give the old ground the send-off that it deserved. Sunderland Reserves had been the first visitors back in 1950, so it was only right that they played a part in the farewell, and a friendly was played on 8 May – with future England goalkeeper Jordan Pickford among those who featured for the Black Cats!

What should have been the last league game, on 11 May, saw Consett draw 2-2 with recent FA Vase winners Spennymoor Town, but that honour fell to a re-arranged game against Newcastle Benfield two days later, after the ground’s ageing floodlights failed in the original fixture a fornight earlier, causing it to be abandoned.

So to the final Consett game at Belle Vue Park, and Newcastle United legend Peter Beardsley agreed to bring an XI to mark the occasion. The Magpies included three players with first-team experience, as well as a young Ryan McKinnon – now where have we heard that name before?

Consett were missing a number of first-team regulars, including 35-goal top scorer Michael Mackay, who had gone on holiday, but acquitted themselves more than adequately in the first half.

Newcastle started on the front foot and in the first minute Michael Richardson played in Inman, who rounded Consett keeper Peter Jameson with ease, but was left with too tight an angle to score.

However, the striker – recently back from a productive loan spell at League One side Crewe Alexandra – didn’t have to wait long to make amends, as a Carl Piecha error let him through on goal again, and this time he made no mistake, rounding Jameson with ease before finishing into the empty net.

A minute later Inman broke through again and centred for Rolando Aarons, who blazed over when it looked easier to score. A rout looked on at this point, but in fairness to Consett they stayed calm and steadily made their way into the game.

The next period of the game was scrappy, but the Steelmen slowly became the better side and in the 34th minute Aris Guerin-Lokonga forced a good save from Jonathan Mitchell with a 20-yard effort, following a surging run from Piecha.

A minute later Guerin-Lokonga was unlucky to see his close-range effort from a Mark Eccles pull back loop over the bar. Steven Aiston was next to try his luck on 40 minutes when he turned his marker and shot narrowly over.

The final action of note came in the 41st minute when Piecha again powered forward from defence and hit a great 25-yard shot but Mitchell was again equal to it.

There were no less than eight half-time subs, five of them for Consett, and this seemed to knock the home side out of their first-half time rhythm.

The first minute of the half started identically to the first, with Inman rounding Jameson, but this time the keeper brought the Scottish Under-21 international down, and James Tavernier made no mistake from the spot, blasting into the roof of the net.

It was 3-0 on 50 minutes when Richardson again played in man of the match Inman, who made no mistake, calmly finishing past Jameson.

Consett recorded what would prove to be their only on-target effort of the half on 51 minutes when Luke Sullivan hit a scorching 25-yard free-kick, very similar to one he’d scored against Billingham Synthonia, which brought the best from Mitchell. It was a shame it didn’t go in, as it would have been a fitting final home goal at the old ground.

However, Newcastle soon made it four in the 53rd minute. Jameson made a very good save from a Quinn effort, but Aarons was on hand to make up for his earlier miss by finishing from close range.

Presumably to the relief of the Consett back line, Inman was withdrawn at this point but Quinn made it 5-0 on the hour mark, finishing from close range after good set-up play from Richardson.

The visitors seemed to take their foot off the gas at this point and they were certainly less threatening without Inman. Indeed, the next point of interest was the sixth and final goal in the 88th minute, when Streete pounced on a loose ball six yards out and turned smartly to finish into the bottom corner.

Despite the scoreline, all concerned seemed to go home happy with what was a fitting final game for Consett at Belle Vue in front of a good crowd of 750 – two more than had watched the league game against Darlington 1883 back in August.

As fans filed out of a Consett game at Belle Vue Park for the last time – though there was still the League Cup final to play in four days’ time – they were left to reflect on the games and players they’d seen there, and look forward to a new beginning.