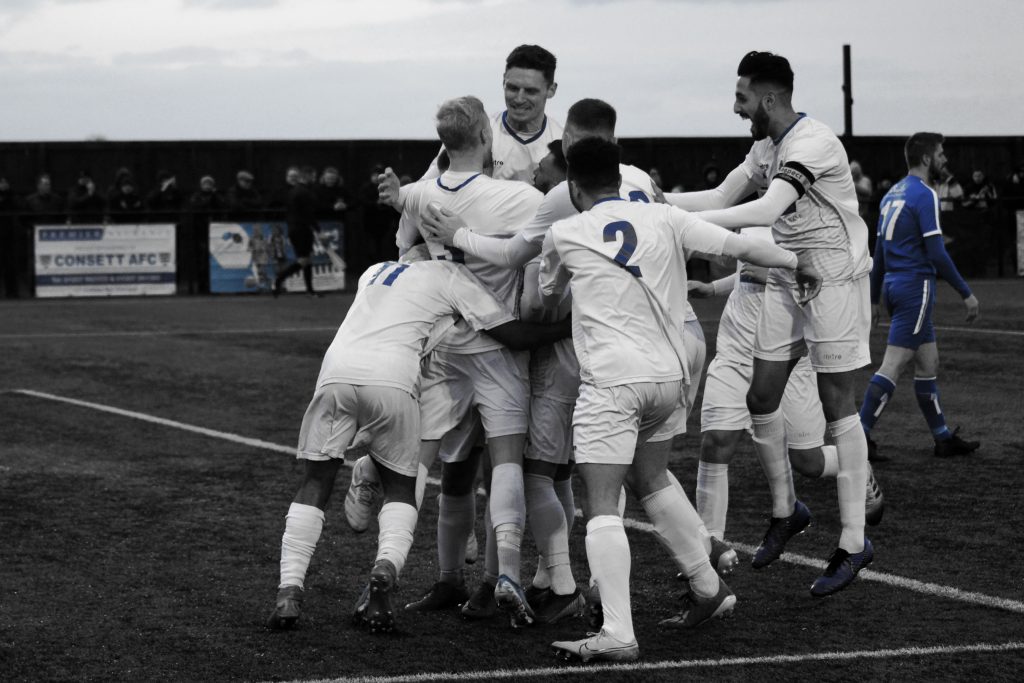 After careful consideration by the club, it has been decided that all Consett AFC’s appearances and goals from the abandoned 2019-20 season WILL STAND.

Although the season was declared null and void after football was shut down due to the coronavirus pandemic, club officials felt it unfair that the statistics from the season simply cease to exist.

Therefore, although there won’t be any sort of presentation night, it’s only fair to recognise some of the individual achievements from the season that will be wiped from the record books.

We used 30 players over the course of 44 competitive games. No one was ever-present, but Jermaine Metz and Calvin Smith both figured in all but one match, while Kyle Hayes missed just three, and also recorded his 100th appearance. A total of 12 players made their debuts.

One of them was Dale Pearson, who enjoyed an excellent first season in our colours, and was top scorer with 30 goals in 34 games. We hope there’ll be many more to come once football can resume – whenever that might be.

Calvin Smith had his best-ever season in front of goal, scoring 18 times. That gave him membership of an exclusive band of players who have netted 50 or more goals for Consett.

If the season had reached a natural conclusion, Calvin would also have passed 350 appearances as a Steelman. He’s on 347 – a total only a dozen or so players have bettered in our history.

Matty Slocombe‘s not far behind, on 338 appearances, and might have reached 350 too – we had a minimum of 11 games remaining, and potentially as many as 14, depending on further cup progress.

Of the current squad, Michael Mackay leads in terms of games and goals, successfully returning from a long-term injury to take his totals to 323 goals and 410 games – a true club legend.

Others who enjoyed a good season in front of goal include vice-captain Luke Carr, whose total of 14 beat his previous season’s tally, and Ali Alshabeeb, who had 13 and was improving all the time when the season came to its premature end.

Other mainstays of the team which took us into the FA Vase semi-finals for the first time in our history were our skipper and leader Arjun Purewal, his central defensive partner Ross Wilkinson, marauding full-back Darren Holden, ever-reliable utility man Nick Allen, and classy midfielder Jake Orrell.

And let’s not forget the likes of Max Russell, Dan Hawkins, Simon Jakab, Thomas McAloon and Dean Briggs, whose combined efforts contributed a total of 66 appearances and a couple of goals to the cause.

Players who have moved on and others who made just the odd appearance are also part of the club’s history – whatever other record books might say about a season which officially didn’t exist.

It would be remiss not to put on record our thanks to manager Terry Mitchell, his assistant Graeme Coulson, goalkeeping coach Ben Cole and physio Rachel Davison for their efforts, the committee, matchday helpers, our sponsors, and, of course, each and every supporter who cheered on the lads, home and away.

Stay safe and well, and we look forward to seeing everyone back at Belle View Stadium when the whole Covid-19 crisis is over.