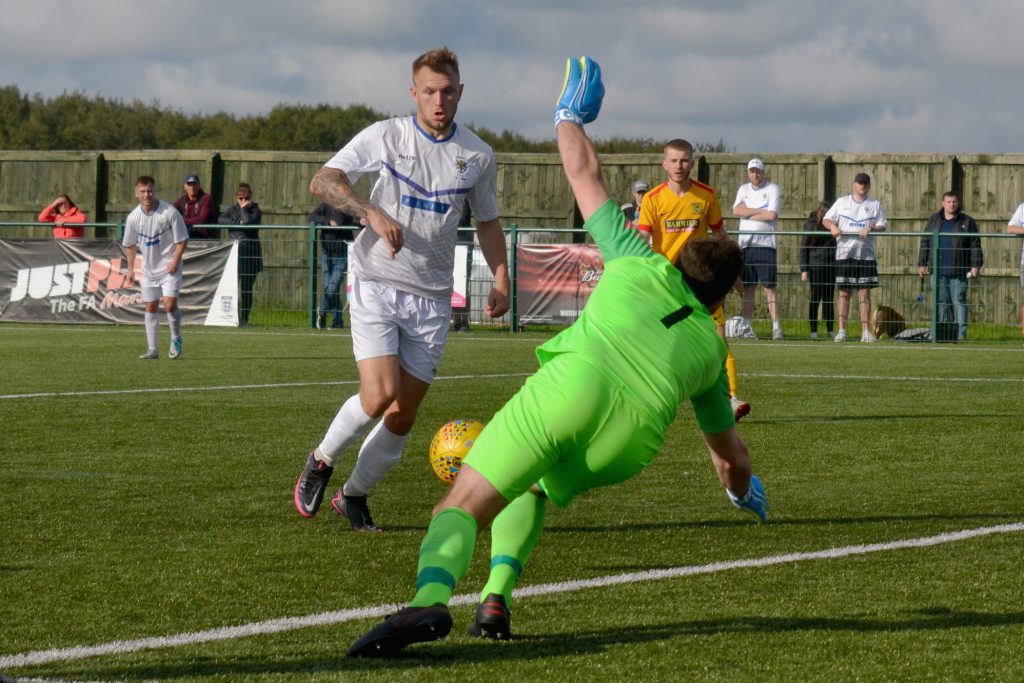 Dale Pearson’s first two goals of the season helped Consett to a 3-2 win over his old club Newcastle Benfield at Belle View Stadium today – but they had to come from two goals behind to do it.

The big striker, who was top scorer with 30 goals last season, had yet to hit the net this time round, but made up for that with a brace in a goal-laden first half.

Benfield took the lead on 14 minutes when an error in the home defence left veteran striker Paul Brayson with only the keeper to beat, and he obliged.

On 22 minutes they doubled their lead, with Paul Brayson finishing again after a deflected cross fell kindly for him.

Consett were awarded a penalty on 27 minutes after Benfield old boy Jake Orrell was brought down in the box. The visiting players were incensed, not by the decision, but by the fact one of their players, Jack Cooper, had gone down injured in the build-up.

Sadly, he ended up being stretchered off with what looked like a serious injury, and after a three-minute delay Dale Pearson stepped up to convert the penalty and halve the deficit.

In the 42nd minute Consett were level when Ali Alshabeeb chested down a great crossfield pass by Darren Holden, beat his man, and finished into the far corner.

Two minutes into the time added due to the Benfield injury Consett took the lead. Orrell swung in a cross from the left, a defender could only head it down into the six-yard box, and Dale Pearson reacted quickest, pictured top, to turn it home and make it 3-2 at half-time.

After a goal-packed first half the sell-out crowd of 300 were probably expecting more after the break, but Benfield keeper Andrew Grainger had other ideas.

He made a good save low down from Pearson’s free-kick, denied Lewis Green his first goal for the club from a well-struck 20-yarder, and foiled Pearson again to deprive him of his hat-trick.

On the one occasion Consett did beat him, when Orrell looped a header over him from debutant Daniel Marriott’s cross, the crossbar came to his rescue, and the final whistle saw Consett make it two wins from two in the league.