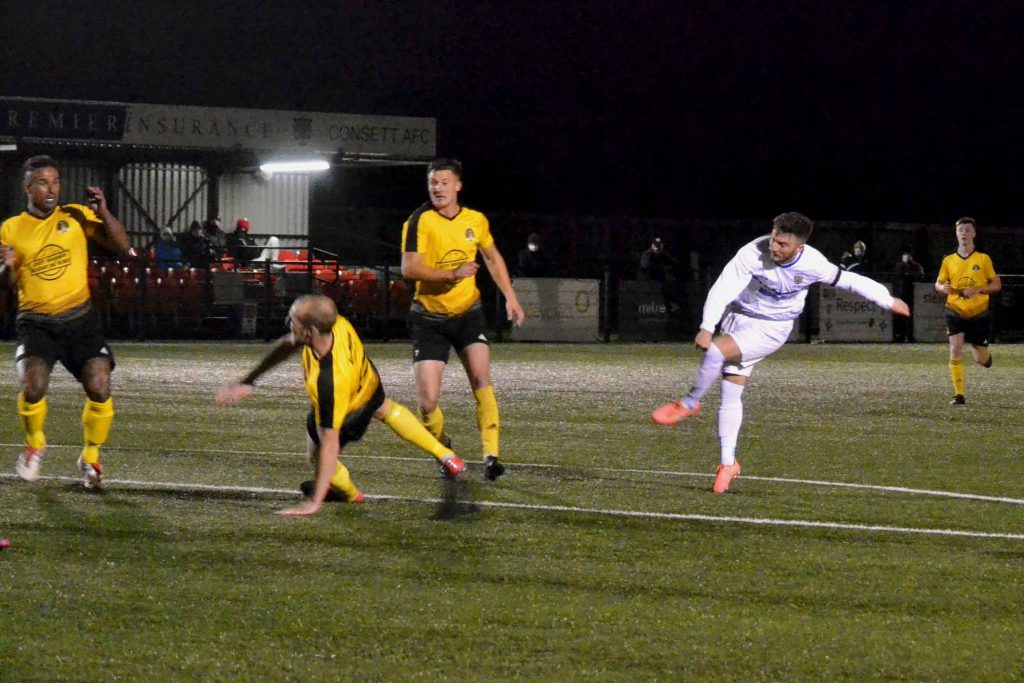 Luke Carr was Consett’s matchwinner for the second game in a row tonight as they beat West Auckland Town 3-2 at Belle View to make it three wins in three league games and stretch their unbeaten run this season to seven.

But the Steelmen had to come from behind to do it, after going a goal down early on for the second Division One match in a row.

The game was only two minutes old when they conceded a free-kick on their left, which was swung in by Anthony Bell, and Jamie Harwood headed West into the lead.

On nine minutes it was 1-1 when a great piece of control and superbly weighted pass by Dale Pearson left Calvin Smith with just the keeper to beat, and he obliged.

In the 20th minute Consett went ahead after another well-worked move, when a corner was played low into the box and Dale Pearson fired home into the far corner.

Luke Carr almost made it three in the 28th minute when his curling effort brought a superb full-length diving save from ex-Consett keeper Tom Flynn in the West goal.

It remained 2-1 at half-time, but within three minutes of the restart West were level. Flynn pumped a long clearance downfield, and a mistake in the Consett defence let in Jordan Blinco, who ran through to score.

Flynn beat out a well-struck effort from Carr, and Consett had a decent penalty shout turned down after Ali Alshabeeb seemed to be felled by Gary Brown, but they got what turned out to be the winner in the 58th minute.

Bell had a chance to level the scores on 67 minutes, but his shot drifted wide, while at the other end Flynn twice denied Pearson to deny Consett the comfort of a two-goal cushion.