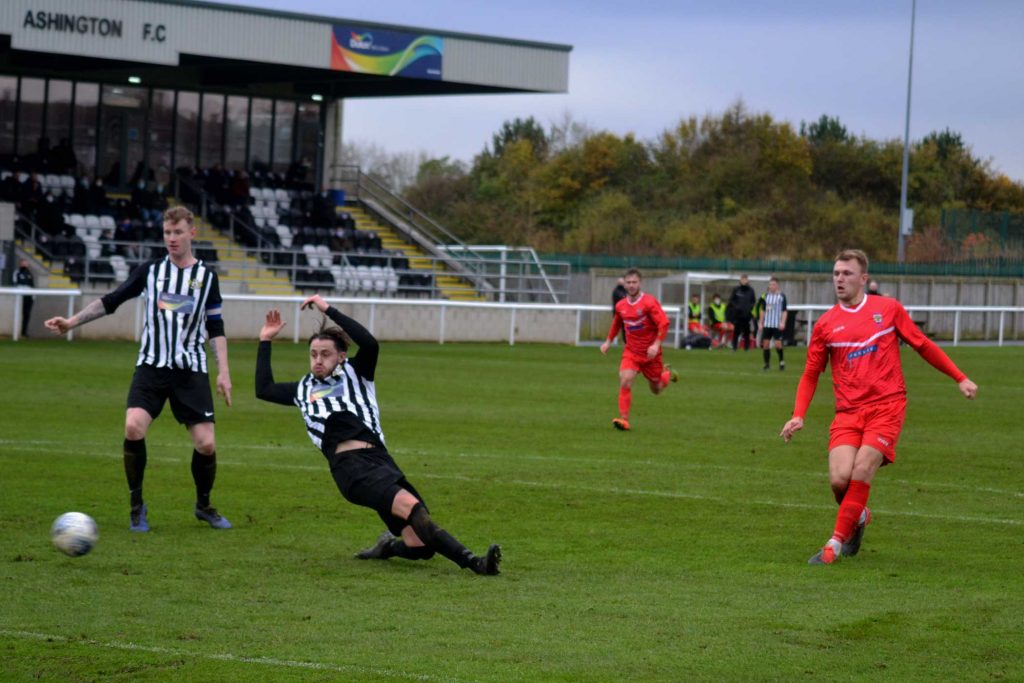 A much-improved performance saw Consett return to winning ways today when they headed home from Ashington with three points after a convincing 3-0 victory.

Matty Slocombe’s return to the starting line-up for the first time in 12 games gave the Steelmen a much more solid look, and they took the game to their hosts with an attacking 3-5-2 line-up, with Jermaine Metz and Darren Holden as wing-backs, and midfielder Calvin Smith as part of a back three!

Ashington almost took the lead on seven minutes when Lee Scott hit the post, but Consett got the breakthrough on 22 minutes when Luke Carr’s through ball sent Dale Pearson clear, and he fired home from just inside the box, pictured top.

Two minutes later the lead was doubled when Darren Holden hit a speculative effort from the angle of the penalty area, and it ended up in the far corner. Cross or shot? Consett didn’t care, it was 2-0.

On 32 minutes it was almost three when Jake Orrell’s cross picked up Slocombe, whose diving header brought a good save from Ashington keeper Adam McHugh.

Consett enjoyed a stroke of luck on 35 minutes when Ashington hit the post for a second time, this time through Jack Butler, but the game swayed heavily in their direction when the Colliers were reduced to 10 men.

Pearson ran onto a similar pass to the one which had brought his goal, and went down under a challenge from Thomas Bramley. Ashington thought he got the ball, the referee judged otherwise, and showed the centre-back a straight red card.

To add insult to injury Consett almost scored from the resulting free-kick, but McHugh made a good save from Matty Cornish.

Ashington made a double substitution for the second half in a bid to salvage something from the game, but Consett went straight at their opponents from the off, and could have extended their lead just a minute in when Carr’s shot was saved and Pearson put the rebound wide with the goal gaping.

He made no such mistake in the 49th minute when excellent work by Cornish and Holden down the left saw the latter pick out Dale Pearson 10 yards out, and he fired home left-footed for 3-0.

On 56 minutes Pearson could have had a hat-trick after McHugh made a fantastic reaction save to prevent Luke Salmon putting through his own goal, but the No 9 put his follow-up header wide.

McHugh made good saves from Carr and Holden as Consett sought a fourth, while Kyle Hayes maintained his clean sheet by preventing a corner from Ashington’s new signing Paul Robinson from going straight in.

Ali Alshabeeb and Carl Lawson both had chances to add to the scoreline as Consett finished the game on top, but they were more than satisfied with three goals and a clean sheet.