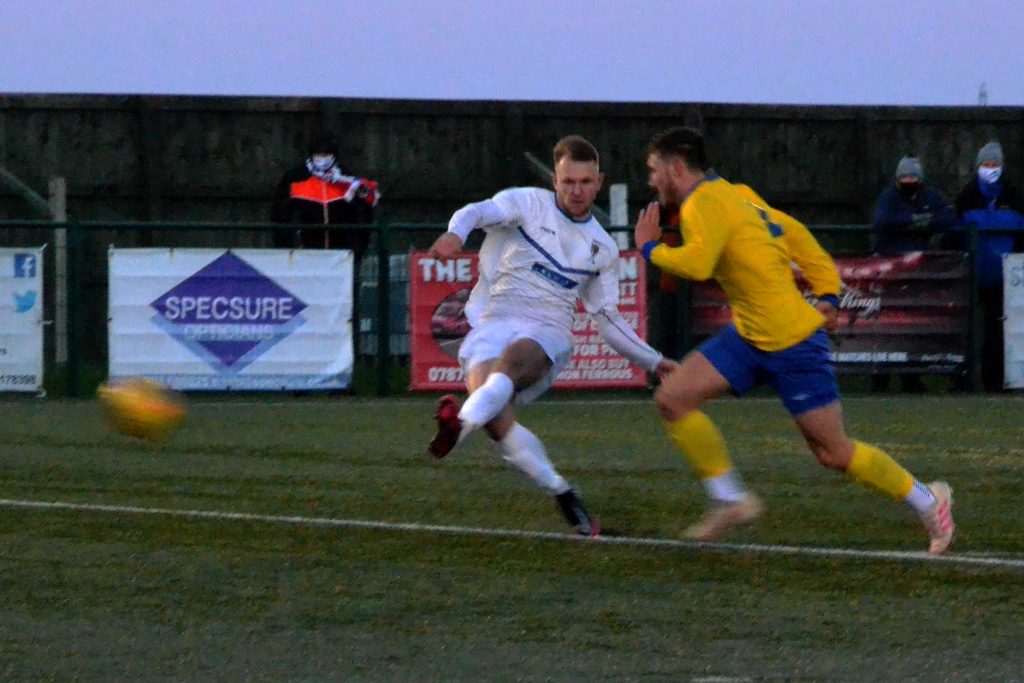 Dale Pearson’s goal was enough to secure a 1-0 win over a dogged Sunderland RCA side today at a blustery Belle View Stadium.

It was the big striker’s fifth goal in his last three games, and his 9th of the season, and lifted Consett to 4th in the Northern League 1st Division.

The first half was a tepid affair, ruined by a gusting wind, and it was 25 minutes before either side had a shot on target, with Kyle Hayes denying RCA striker Stephen Callen at his near post.

Good work by Matty Cornish set up Pearson two minutes later, only for RCA keeper Robbie Dean to make an excellent reaction save. From the resulting corner he saved again from Arjun Purewal’s header, but the referee gave a goal kick.

Right on half-time Matty Slocombe hit a fierce effort from 20 yards which looked goalbound, but a deflection carried it just wide.

The second half saw Consett kicking into the wind, and Pearson had a good chance just a couple of minutes in after beating the visitors’ offside trap, but fired wide.

On 61 minutes Hayes made a fine save from James Fairley, then Luke Carr fired inches wide after good work down the right by Jermaine Metz.

Pearson saw an effort deflected wide after a great pass by Darren Holden, and then RCA had their best spell of the game, with Hayes saving Anthony Callaghan’s free-kick and Ryan Leonard firing across the face of goal.

Cornish had an excellent chance in the 70th minute when he beat two men and brought another fine save out of Dean at his near post.

The winning goal came in the 74th minute, when Consett broke quickly and Carr’s pass sent Dale Pearson clear. This time he won the battle of wills with Dean, finishing from the edge of the box, pictured top.

Consett’s winning margin could have been greater, but Slocombe fired one chance into the side netting in the 85th minute, and another narrowly wide two minutes into added time.

When the final whistle went there was little doubt that the best team had won, and Consett moved to within two points of second-placed North Shields.