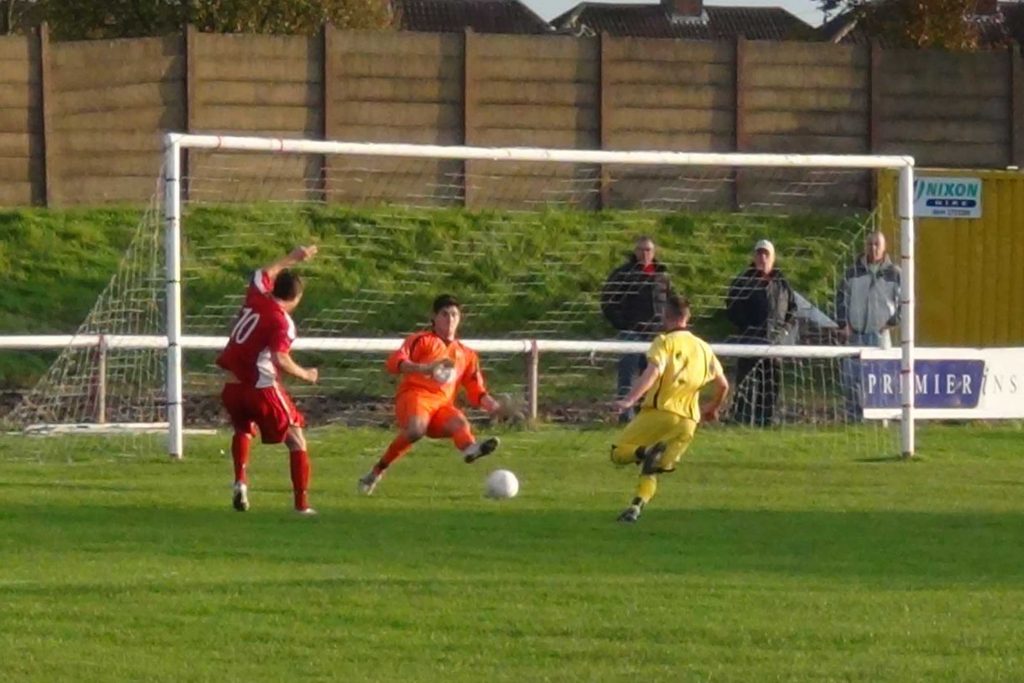 Remember the UK-wide lockdown back in the spring, when the Northern League season was suspended and then declared null and void? Of course you do.

In the absence of football during that time, we enjoyed a regular look back at matches from Consett’s history in our On This Day feature. We trawled our archives and unearthed lots of previously unseen pictures as we celebrated our past.

With no football fix until at least 3 December after the Government announced Lockdown Mk II to try to combat the spread of coronavirus, we thought we’d do it again!

We’ll be looking back at games from our recent past – and not-so-recent in a couple of particularly notable occasions – starting with a 5th November cracker at our old Belle Vue Park ground back in 2011.

Our opponents in the Division one encounter were South Shields, who we’ve enjoyed a friendly rivalry with for many years, and there were certainly fireworks as we won an incident-packed game 4-3!

A Michael Mackay first-half double and second-half strikes from Dale Burrell and Marc Walton were enough for victory, and although Consett were never behind, the points never looked safe until the very closing stages.

Kenny Lindoe’s side started slightly the brighter and were first to threaten when Dale Burrell burst through from midfield on seven minutes, however instead of squaring for the wide open Michael Mackay he chose to shoot and his effort was blocked.

Mackay wasn’t to be denied, however, and a minute later he latched onto a long ball by Harrison Davies. Although his shot was well blocked by Jamie Scope, the ball continued its path towards goal and the combined efforts of the hapless defender and keeper Jake Cunningham could only help it over the line for an own goal.

The lead was short lived as Shields equalised with their first attack of note on 11 minutes. Full-back Barrie Smith’s searching cross found the head of Stephen Ramsey, and although Consett keeper Barry Poskett made a good save, future Steelman David Colvin was on hand to finish the rebound from no more than five yards.

With both sides looking shaky at the back, a high-scoring game looked on the cards, and sure enough on 17 minutes Davies again played Michael Mackay clean through, and the in-form striker buried his shot in the bottom right-hand corner, pictured top.

Consett began to dominate, with Davies particularly influential. Floating between the left wing and behind the strikers, the Shields defenders couldn’t pick him up, and he sent a 25-yard effort just wide on 33 minutes before setting up Marc Walton on 35 minutes, though the No 9 put his 12-yard header narrowly wide.

South Shields did come back into the game, and five minutes before the break Stephen Ramsey twice headed just wide in the space of 60 seconds but Consett went into the break 2-1 up.

The second half started flatly but burst into life on 53 minutes with the goal of the game from Dale Burrell to make it 3-1. The assist again came from Davies, who squared to him 30 yards out, and the midfielder smashed the ball into the top-right corner.

It was almost 4-1 on 57 minutes but Walton was unlucky to see his effort from 12 yards hit the bar, with Davies again the provider.

Consett seemed content to sit on their lead at this point, which let Shields began to dominate possession and noticeably grow in confidence.

The Steelmen started to look nervous in defence, and the inevitable happened on 72 minutes when, after numerous failed attempts to clear their lines, Jonathan Wightman sent in a cross from the right and David Colvin doubled his tally for the afternoon with a neat volleyed finish.

Just as it looked as though the home side could be in for a torrid final period, Craig Robson hit a lovely diagonal pass to Chris Hutchinson, and just as the wideman looked as though he was about to shoot, he cleverly cut the ball back to Marc Walton, who, with the help of a post, made no mistake to make it 4-2 on 75 minutes.

Consett finally looked as though they would see the game out in comfort, and although South Shields got a third in the third minute of stoppage time through a looping Lee Bell header, there was barely time to kick off again.