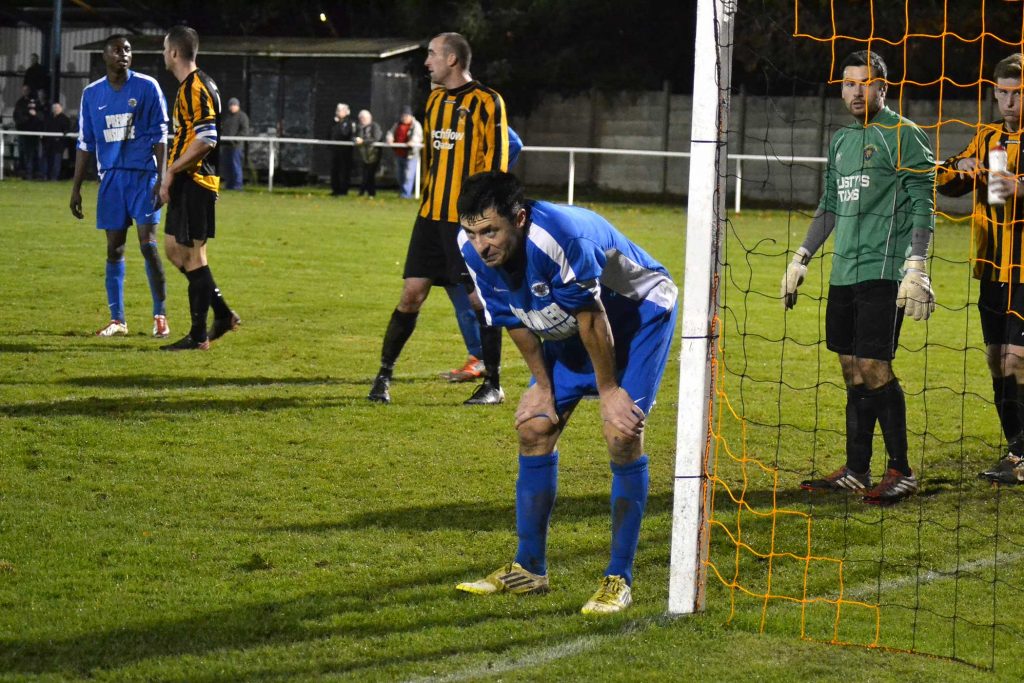 Consett took their fans on a roller-coaster ride in an entertaining Wednesday night game at Morpeth Town on this day seven years ago.

The Northern League Division One game at Craik Park saw them rack up their 50th goal of the season, but concede their 48th – in just their 19th game!

Manager Kenny Lindoe made two changes to the side which had beated Jarrow Roofing eight days earlier, with fit-again defenders Carl Piecha and Ryan Bell coming in for Matty Slocombe and Mark Eccles, with the latter a late withdrawal after pulling up in the warm-up.

The Steelmen pushed forward from the start, and should have gone in front within two minutes, when a good move down the right gave Chris Bell a chance, but he badly miscued his shot across the face of goal.

But on four minutes Consett were ahead, with Bell making amends by sending Michael Mackay clear with a measured pass which beat the offside trap, and left the former Hartlepool man the simple task of slotting home past advancing keeper Steven Mundy.

After their early setback, the home side regrouped to enjoy their best spell of the game, with Sean Taylor and Jordan Fry both going close, before a right-wing cross brought the equaliser on 19 minutes. A ball in from the wing fell to the back post, where Taylor fired home. However, the referee had already blown the whistle for a push on Michael Chilton by Michael Pearson, and awarded a penalty. Chilton stepped up and thumped his spot-kick into the top-left corner.

Consett thought they had re-taken the lead on the half-hour mark. David Brown took a quick free-kick to Anthony Lund on the left, and his cross found Mackay, who hooked the ball home. But the away bench had returned a stray ball onto the pitch, and even though it was not interfering with play, the referee ruled out the ‘goal’.

The incident seemed to make Consett lose their focus for a while, and on 40 minutes they went behind, after a flowing Morpeth move down the right. Defender Daniel Patterson started it with a pass out to Fry on the right, and he reached the by-line before crossing into the six-yard box, where Chilton netted with a cheeky backheel.

With the final kick of the half, Consett made it 2-2. Piecha set Lund away down the left with a long ball out from the back, and when Morpeth keeper Mundy came racing out of his area into no-man’s land, the wide-man rolled it past him from 30 yards.

Consett made a change at half-time, bringing on Aris Guerin-Lokonga for Brown, with Lund dropping to left-back. And it paid dividends when they retook the lead on the hour. Mackay fed the ball out to Chris Bell on the right, and he drove the ball into the middle, where Sullivan finished from a few yards out, for his 20th goal of the season.

Pearson almost joined him on the scoresheet a couple of minutes later when his speculative effort from the right was pawed from under the crossbar by Mundy, and then Mackay put a header straight at the keeper from another Chris Bell cross.

But in what was fast becoming the story of the season, the Steelmen were made to pay for not taking their chances, as Morpeth equalised on 72 minutes. Right-back Shaun Henderson crossed towards Chilton, and the striker looked to have been pushed in the back by Piecha, who headed the ball up in the air. As the rest of the defence stood watching, Taylor reacted first to rifle the dropping ball into the top-right corner.

As the game entered its last quarter of an hour it looked like ‘next goal wins’, and Consett had what they thought was a good penalty appeal turned down when Guerin-Lokonga was sent sprawling by centre-back Chris Jewels as they chased a ball into the box.

The referee awarded only a corner, but the decision worked in Consett’s favour, as from the setpiece they went 4-3 ahead. Bell’s corner was half-cleared, and Calvin Smith lashed home the goal of the game from 25 yards with a superb strike which went in off the bar.

Consett brought on Craig Robson for Andrew Cuthbertson in a bid to shore things up, but they needn’t have worried, as, with five minutes to go, they scored again to wrap the game up. Pearson’s pass sent Guerin-Lokonga clear, and he made the keeper commit himself before unselfishly squaring the ball for Sullivan to roll his second goal of the night and 21st of the season into the unguarded net.

The teams lined up:

This was the season Consett played their first 18 league games away from home, while they waited for their new Belle View Stadium to be completed. This was the 15th of those games. Such an unbalanced schedule obviously took its toll on the Steelmen, and they finished the season 11th.

Morpeth, who had only been promoted from the 2nd Division the season before, finished 17th in their first season back in the top flight. But their fortunes over the next few seasons would show how quickly things can change in football.

They were 8th the next season, then 4th – in the same season where they lifted the FA Vase – before two runners-up finishes prepared the way for promotion.