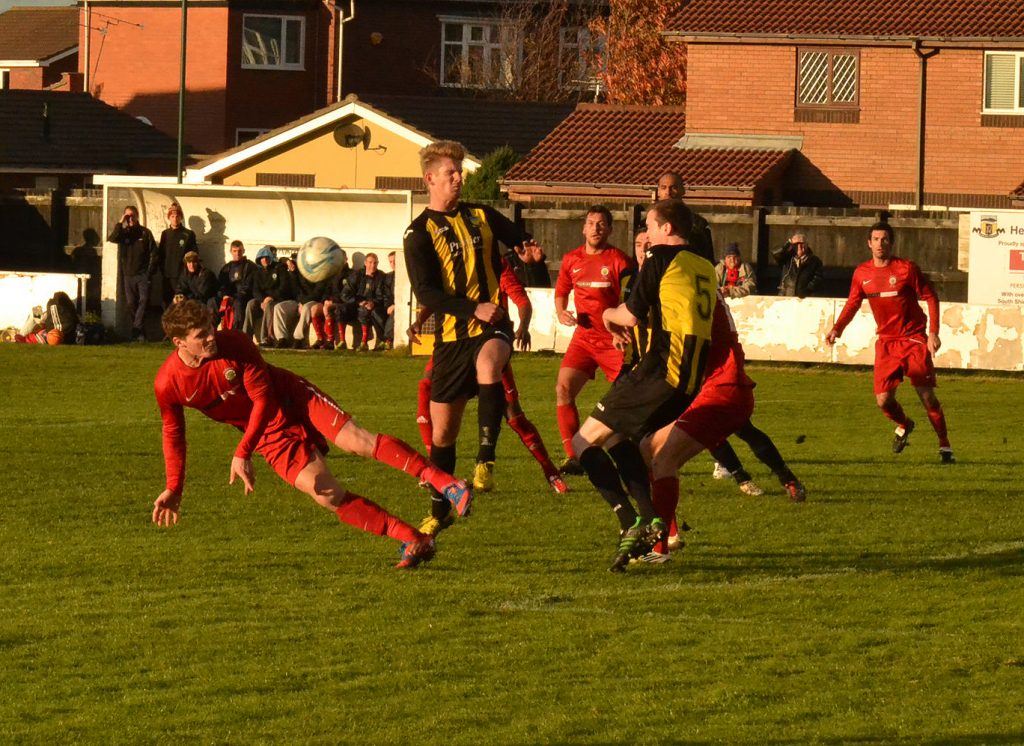 Four goals in an amazing 15-minute spell either side of half-time gave Consett the points against bottom club Hebburn Town on this day back in 2013.

But manager Kenny Lindoe was just as pleased with the clean sheet his side kept in the Ebac Northern League Division One game at Hebburn Sports Club – it was just their second of the season.

This was their 16th consecutive away game of a lop-sided season as they waited for their new ground Belle View Stadium to be finished.

In a typically attack-minded move, Lindoe made just one change to the starting line-up from the previous game, a 5-3 midweek win at Morpeth, which you can read about here, with Aris Guerin-Lokonga coming in for the injured David Brown.

He lined up in a three-man attack with Michael Mackay and Luke Sullivan, with Anthony Lund dropping in to left-back. Hebburn, who were still looking for their first league win of the season, included one ex-Steelman, midfielder Daniel Reeves, who’d made three appearances in 2011-12.

Consett started the game as they’d left off against Morpeth four days earlier, and Sullivan had a chance after just two minutes, but volleyed wide of the left-hand post from Mackay’s cross.

But both sides struggled to find any sort of rhythm for the next 20 minutes, and the first-half had reached its midway point by the time the next serious chance arrived.

Sullivan tried his luck with a free-kick from 25 yards, and although Consett claimed a defender in the wall had handled, the referee was unmoved.

Mackay had the next notable chance on 25 minutes, but fired over from 20 yards – so far over, in fact, that the ball cleared the wall behind the goal and ended up on the main road outside.

However, Michael Mackay showed he had his shooting boots on 10 minutes later when he received the ball on the edge of the box, worked an opportunity for himself, and cracked home a great shot to make it 1-0.

Seven minutes later it was 2-0, and this time it was top scorer Luke Sullivan on target. Consett were awarded a free-kick on the right, and Calvin Smith’s dead ball was met by the head of the No 9, who powered it home from eight yards.

Right on half-time Consett scored again, and it was the best goal of the game. Chris Bell’s corner from the right was cleared only as far as Andrew Cuthbertson on the left edge of the box, and he took a couple of steps forward before curling an exquisite chip just under the bar, beyond the grasp of Hebburn keeper Andy Hunter. Cuppa didn’t score many, but when he did they were top-quality.

Consett went in at the break 3-0 up, and within five minutes of the restart they had extended their advantage. Michael Pearson’s pass in from the right found Michael Mackay, who prodded the ball home from inside the six-yard box.

It seemed to be a question of how many Consett would now score, but to Hebburn’s credit they kept plugging away, and began to create chances themselves.

Giant striker Channon North had one shot saved by keeper Jack Norton, then blazed the rebound over, and steered another wide with the goal at his mercy.

Consett also had chances to add to their total. Smith struck a 30-yarder just over the bar, and Mackay drilled a shot wide from Chris Bell’s pass. The ex-Hartlepool striker had a great chance to complete his hat-trick when he was set up by Guerin-Lokonga on 72 minutes, but again fired over from 20 yards.

The last chance of the game fell to Hebburn No 9 Kris Goss, with just a couple of minutes remaining, but he hit the bar with a free header after a sloppy piece of marking by the Consett defence.