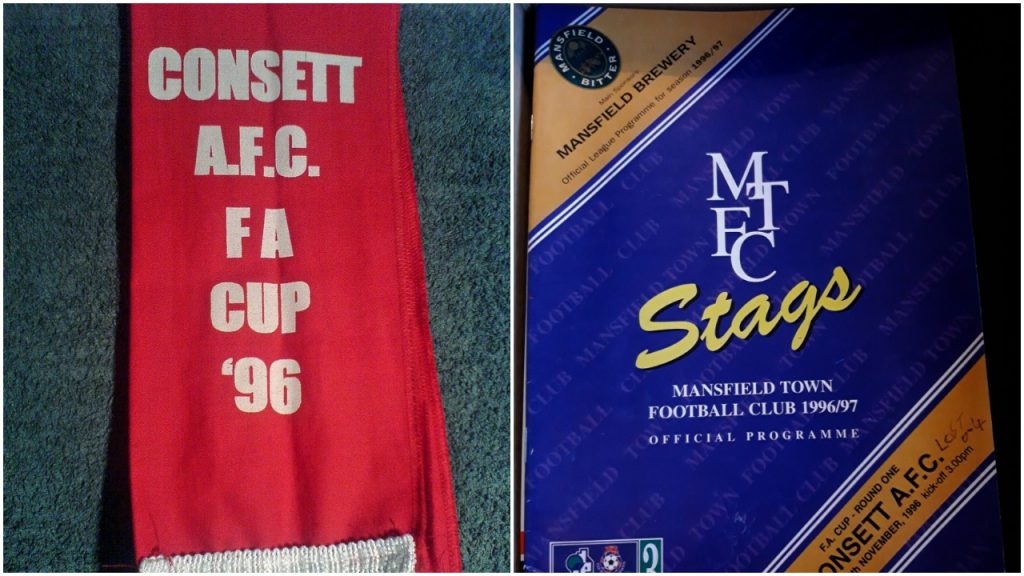 Saturday 16 November 1996 was the day Consett played in the 1st Round of the FA Cup for just the second time in the club’s long history, an away tie at Third Division Mansfield Town.

It was the crowning achievement of Colin Carr’s long reign as manager, and even though they lost 4-0, it is a day everyone involved – from the players and staff to the estimated 1,000 fans who travelled to Nottinghamshire – will never forget.

Consett had battled through five qualifying rounds to get to the competition proper, their run starting in unspectacular fashion with a 0-0 draw at the St James’s Park home of fellow Northern League side Alnwick Town on August 31.

A replay at Belle Vue Park saw the Steelmen progress courtesy of goals from Gary Cowley and Steven Brown in a 2-0 victory, and the first qualifying round gave them another away tie, at Unibond League side Harrogate Town, where, despite being underdogs, Consett won 1-0 with a first-half goal from Carl Rowell.

The second qualifying round brought another away draw, at Durham City, who had finished third in the Northern League the previous season. Darren Grimes gave Consett the lead, but although Durham equalised, and the match finished 1-1, the Steelmen progressed because it was found that City had fielded an ineligible player.

The third qualifying round saw Consett handed a fourth successive away tie, this time at Unibond side Bishop Auckland, and again they upset the odds by winning 1-0 with a goal from Colin McLeod. The win came at a cost, however; defender Johnny Brown broke his leg, and would miss the game at Mansfield.

The fourth qualifying round gave Carr’s side yet another away tie, against GM Vauxhall Conference neighbours Gateshead, and the Steelmen confounded expectations once more, winning 1-0 with another McLeod goal.

FA Cup fever truly swept the town, with the club attracting lots of newspaper and TV coverage, but it was no surprise when the draw gave them yet another away fixture, at the quaintly-named Field Mill home of Mansfield Town.

A fleet of buses set off from Belle Vue Park at 10am on matchday, and many more supporters made their way down by car, and by kick-off an estimated 1,000 Consett fans had swelled the crowd to 3,183 – Mansfield’s biggest of the season.

Consett were huge underdogs, and determined to give their all, but their hopes of a giant-killing disappeared in a 15-minute spell immediately before the interval, when they conceded three goals.

Their best chance came early when Steven Brown, wide on the left, fired just wide after cutting in to take a return pass from Colin Mcleod.

Colin Woodward went close in the 12th minute from a neatly-worked free-kick, and McLeod might have done better with a header from another set-piece, but Mark Outterside got in the way.

Just when it seemed like Consett might achieve their dream they conceded a goal on the half hour, when their defence was dragged out of position for the first time, leaving the much-travelled Tony Ford, Mansfield’s player-assistant manager, unmarked to open the scoring from close range.

Central defender Scott Eustace headed a second from a free-kick three minutes before the break – “rank bad marking and a disgraceful goal to concede” said Carr. Worse was to follow as John Doolan’s shot was deflected in off the helpless Jeff Sugden on the stroke of half-time to make it 3-0.

Consett conceded a fourth goal in the 74th minute when Simon Wood netted for Mansfield, but the Steelmen did their fans proud, battling all the way, led by inspirational skipper Sugden, but never resorting to roughhouse tactics – they conceded only six free-kicks all game.

Carr conceded after the game: “At three down it was very unlikely that we would make a comeback, and in the second half we played for our pride, and I think we achieved that.

“We fought and worked so hard and played our hearts out. I couldn’t have asked for more and we did our supporters proud.

“They [Mansfield] really made us run when we could have done with a really horrible day in Consett – wet, windy and snowing. Then it might have been more equal.”

The cup run earned more than £10,000 in prize money for Consett, which helped them replace the dilapidated floodlights at Belle Vue. But 24 years on and counting, the wait for a third appearance in the FA Cup proper – and maybe a home draw at last – goes on.