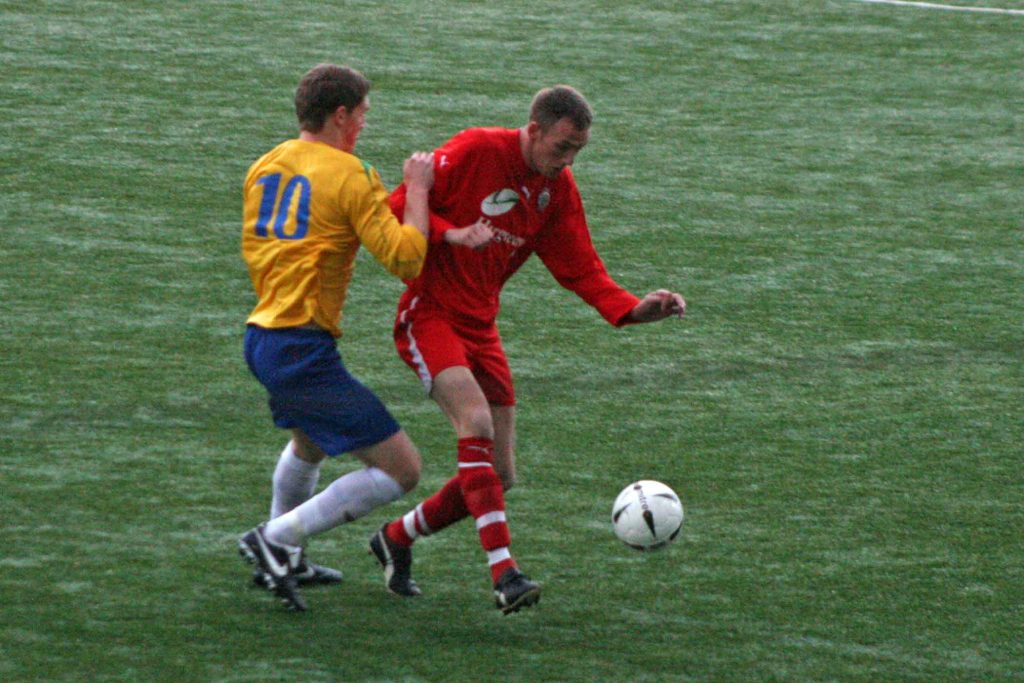 Consett won the battle of the Northern League’s top two on Durham City’s plastic pitch to make FA Vase progress on this day 13 years ago.

The 2nd Round win – still talked about to this day by those who were there – was even more impressive than the Steelmen’s 3-0 league victory at the Archibalds Stadium three and a half weeks earlier.

Kenny Lindoe’s side were unchanged from the XI that had registered a 4-2 win at West Allotment Celtic seven days earlier to go top of the league (read about that game here).

Durham included several players who would go on to form the backbone of both their and the all-conquering Spennymoor side of the next few seasons, plus a young midfielder called Calvin Smith. Wonder what happened to him…?

They started slowly as the home side pinned them back in their own half for most of the early exchanges. A left-wing cross from Stewart Morris created problems for Consett on 14 minutes, but it was too high for Jamie Clarke to direct on target.

Consett opened the scoring somewhat against the run of play in the 18th minute. David Pounder crossed from the right flank, and although Mattie Moffat mis-controlled it, the ball broke kindly to Gary Ormston, who calmly found the top corner from 12 yards.

A slick Consett move saw them double their lead just before the half-hour mark. Mark Patterson released Steven Johnson through the right channel, and his chipped cross was planted into the bottom corner by the head of Moffat.

Four minutes later Consett added a third when Pounder’s right-wing corner was flicked on at the near post by Johnson, and Moffat stretched to volley the ball home from close range.

Durham’s best chance of the first half fell to Tommy English, but his strike from the edge of the area was saved at full stretch by Consett keeper Craig Turns. English also saw a free-kick from inside the ‘D’ go round the wall but wide of the post

Consett were in control, and content to sit on their three-goal cushion in a largely uneventful second period, bringing on John Ewart in place of Steven Brown to enable them to play four at the back.

Morris set up English with another chance seven minutes into the second half, but he dragged his shot wide, as Turns continued to have one of his quieter afternoons.

On 65 minutes Johnson’s brilliant shot on the turn forced Durham stopper John Mohan to tip the ball over the bar.

Three minutes from time Consett rounded off an impressive victory when Moffat turned inside a defender before rifling a 25-yard strike past the flat-footed Mohan to complete his hat-trick and take his tally for the season to 26.

City might have grabbed a late consolation in stoppage time when John Butler headed a left-wing corner down to Steven Richardson, but the substitute’s attempted lob went over the bar. The day belonged to Consett, and how the home side knew it.

Consett would go on to enjoy what was, until last season, their best-ever run in the FA Vase, beating Trafford and Poole Town before a controversial extra-time defeat at Merstham, which is also still talked about, for all the wrong reasons!

The cup run left them with too much to do in the league, however, and the season’s end saw them finish as runners-up behind Durham, who were promoted to the Northern Premier League.