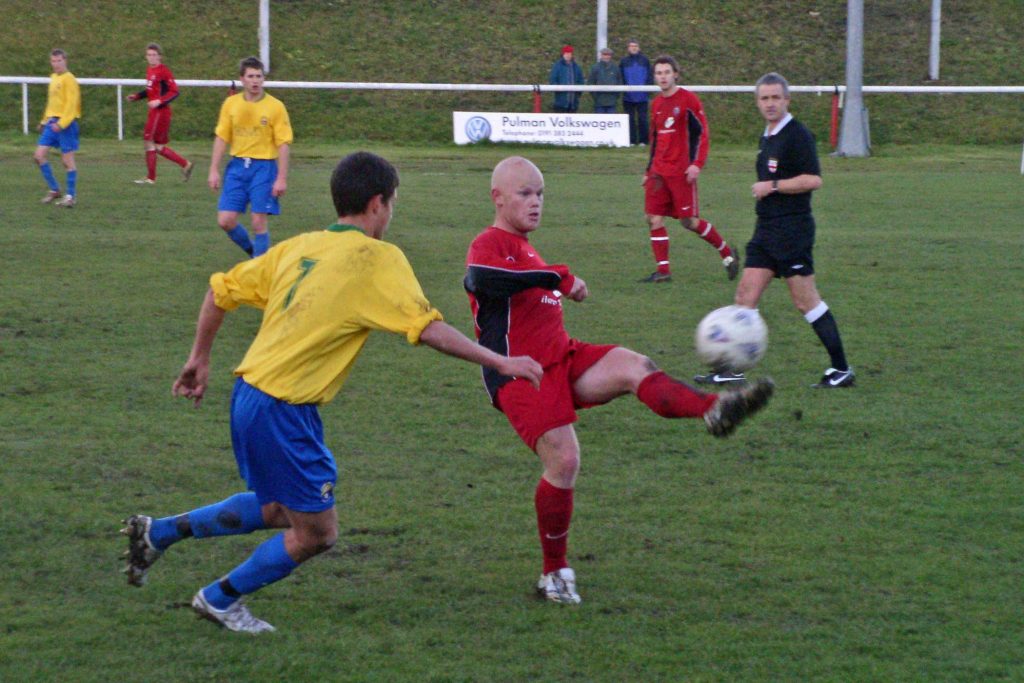 An impressive performance from Consett saw them make comfortable progress through the FA Vase 2nd Round by seeing off Northern Counties East League Premier Division side Garforth Town on this day 14 years ago.

The clubs had history in the competition, as they had met in the 1988-89 season, when Leeds-based Garforth recorded a 1-0 home win over Consett at the same stage. Back then, Consett had been in Division Two of the Northern League, in their first season under Colin Carr, who won promotion at the first time of asking.

This time they were under the control of another manager who’d done the same, Kenny Lindoe, and this was his young, exciting side’s first campaign back in the top flight after taking the 2nd Division by storm the previous season, breaking all manner of club records along the way.

He made four changes to a side that had won unconvincingly against struggling Chester-le-Street the previous Wednesday. Returning to the starting eleven for the game at Belle Vue Park were Mark Eccles, Jonjo Dickman, David Anderson and Craig Turns.

Garforth started the brighter of the two sides, displaying a lot of energy and sharp passing. They had the chance to shock their hosts as early as the third minute when Sheriffe dispossessed Michael Brown before slipping a pass through to Harding in the inside-right position, but Turns came out to make a good save.

The Steelmen took the lead against the run of play with their first serious attack in the 18th minute. Michael Brown, pictured top – who once played in the same Feyenoord team as a young Robin van Persie – intercepted a pass in midfield to begin a move which ended when Michael Mackay collected the ball 25 yards out, advanced to the edge of the area and then dispatched a stunning shot into the roof of the net.

The goal gave Consett the lift they needed and after Mackay had a strong claim for a penalty turned down two minutes later, Gary Ormston sent a rising drive over the bar from 12 yards.

Consett’s second eventually came on 27 minutes, with Mackay again at the centre of the action. His shot on the turn was blocked but he reacted quickly to move the ball inside to Jonjo Dickman, who passed it into the bottom corner with a composed finish.

Consett almost went further ahead when Eccles whipped in a cross from the left but Mackay was frustrated to see his glancing header end up safely in the hands of Garforth keeper Parry.

The visitors ended the half strongly as they looked to get back into the game. Carrick shot over the bar five minutes before the break after being set up by Twitchen. Then Twitchen himself saw a dipping shot tipped over the bar by Turns, and from the resulting corner Kelsey’s header brought an even better save from the Consett stopper.

Garforth began the second half where they left off in the first, with first Renshaw slicing wide, and then Kelly sending a free-kick straight down Turns’ throat.

Consett had another penalty claim denied when Dickman was brought down, before they were on the back foot again, this time when Kelsey’s volley brought the save of the match from Turns – brilliantly tipping over the bar at full stretch.

It was thus something of a relief when the third goal came midway through the second half. Dickman’s defence-splitting pass set man-of-the-match Ormston in the clear down the right flank and he picked out Michael Brown at the back post, who found the net with a first-time shot from a narrow angle.

Pounder could have added a fourth three minutes later but found the side-netting after sutting in from the right.

Garforth to their credit refused to give up, urged on by a boisterous and good-humoured travelling following. Turns was called upon to make a double save 20 minutes from time, denying in turn headers from Twitchen and Harding. Mackay responded for Consett though with a brilliant volley from a Steven Brown free-kick which Parry was equal to.

It was the visitors who finished the stronger and although Sheriffe and Kelsey went close they couldn’t give the travelling hordes – who sang “there’s only one f-in-Garforth” throughout the game – the goal their support deserved.

Four minutes into stoppage time it was Consett who ought to have had the last word when Dickman’s fine solo run ended when his shot was saved by Parry, the Garforth keeper also denying Michael Brown from the rebound.

But 3-0 was enough to take Consett into the 3rd Round, where they were beaten 3-2 at home by Causeway United from the Midland Alliance League. They would still enjoy a fine season, however, finishing fourth in the league and winning the Durham Challenge Cup for the first time in 38 years (read about that here).

Garforth were to enjoy a successful season thesemlves, finishing 4th in their league to secure promotion to the Northern Premier League, where they remain today, as members of the Premier Division.