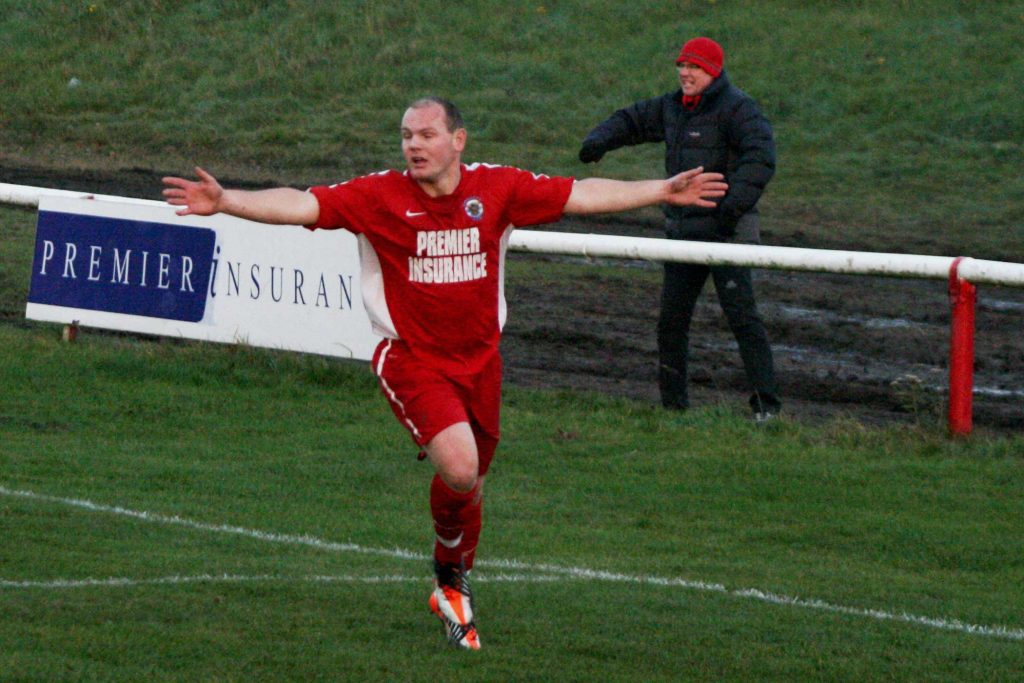 Strikers Marc Walton and Michael Mackay may have grabbed the glory with a brace of goals apiece as Consett beat Ramsbottom United 4-2 in the FA Vase 2nd Round on this day in 2011.

But the resilience of centre-backs Carl Piecha and David Scorer and midfielder Craig Robson was just as important in a hard-fought win at Belle Vue Park against a very good North West Counties Premier Division side.

They stood firm at the heart of the team when the pressure was on, with Roppa putting in a thunderous tackle which arguably decided the course of the game. His return in place of the cup-tied David Molloy was the only change to the side which had drawn at Shildon a week earlier.

After a cagey opening period, it’s fair to say Consett were second-best for long spells of the first half, with Ramsbottom causing problems with their direct approach and two fast, skilful wide men.

One of them, No 7 Grant Spencer, had the game’s first chance on 10 minutes, volleying just over from 20 yards after No 9 Jon Robinson flicked on a long ball.

A couple of minutes later midfielder Mark Drew’s cross from the left picked out centre-half Ian Flannery, but he headed wide.

Goalkeeper Barry Poskett then came to Consett’s rescue three times in as many minutes. First he raced off his line to tackle Spencer after he was played in by Drew, and hacking away the loose ball.

Then he was smartly out again to thwart Robinson, and finally he was equal to Spencer’s shot from 12 yards after the winger was allowed too much room on the right.

It was midway through the first half before Consett had their first shot at goal, but Harrison Davies’s effort from 25 yards cleared the bar by a couple of yards.

Walton then did likewise after a neat turn and shot, but Dale Burrell was a bit closer with a left-footed strike which moved away outside the left-hand post.

After Consett’s best spell of the game, they almost found themselves trailing after Robinson rose highest to meet a left-wing corner, but Anthony Lund cleared his goalbound header off the line.

The let-off seemed to galvanise the Steelmen, as, with half-time approaching, they put in an excellent 10 minutes. First, their best move of the game saw Davies beat two opponents before releasing Mackay down the left-hand channel, only for the No 10’s shot to take a deflection off a defender.

A minute before the break Consett took the lead through Marc Walton, who burst into the box and smashed a low, hard drive which beat Rammy keeper Grant Shenton at his near post.

Three minutes later it was 2-0, and Walton was again the scorer, picking up the ball on the left and going past a defender before rifling home.

The two-goal lead flattered Consett a little, but it didn’t last long. Within two minutes of the restart Ramsbottom midfielder Drew had reduced the arrears with a free-kick from all of 40 yards. It was well-struck, and took a wicked bounce right in front of Poskett, but he would have been disappointed to concede from that far out.

On 53 minutes the tie was level, and again the Consett custodian will ask himself if he could have done better. He came out to punch a Spencer corner from the left, but was beaten to the ball by Flannery, who headed home at the front post.

Consett had a penalty appeal turned down when the front two combined and Walton went down under a challenge, but the referee was having none of it.

Then came the incident on which the tie pivoted – an absolutely immense tackle by Craig Robson in midfield which paved the way for the decisive goal. When you saw Roppa going for a loose ball in the middle of the park you knew there was no way he was coming out without it, and one thundering challenge later Consett were on the attack.

The ball found its way to Davies, who sent Michael Mackay running at goal in the right-hand channel. The former Hartlepool man cracked home a great finish across the keeper into the far corner to make it 3-2.

Ramsbottom had a chance to level again when Lund was adjudged to have halted Spencer illegally right on the edge of the area, but Drew’s driven free-kick across the face of goal just evaded left-back Mark Ayres sliding in at the back stick.

Two minutes later the game was over when Mackay scored an excellent second goal to make it 4-2. He chased a long ball down the left flank, kept it in, and laid it back to Jamie Poole.

His deft pass found Micky 20 yards out, and he looked up and finished with a delightful lob over the keeper, who stood no chance. After being second-best for long spells, and contriving to give away a two-goal lead, Consett were through.

Consett exited the competition in the next round, beaten 4-0 by a Billingham Synthonia side who would go on to reach the last 16. They finished a disappointing 15th in the league, in a season ruined by injuries.

Ramsbottom, on the other hand, went from strength to strength after the defeat, which proved to be their last Vase game. The Greater Manchester club stormed to the NWCL title in record-breaking style, smashing club records all the way. They were promoted to the Northern Premier League, where they remain, and they now compete in the FA Trophy.