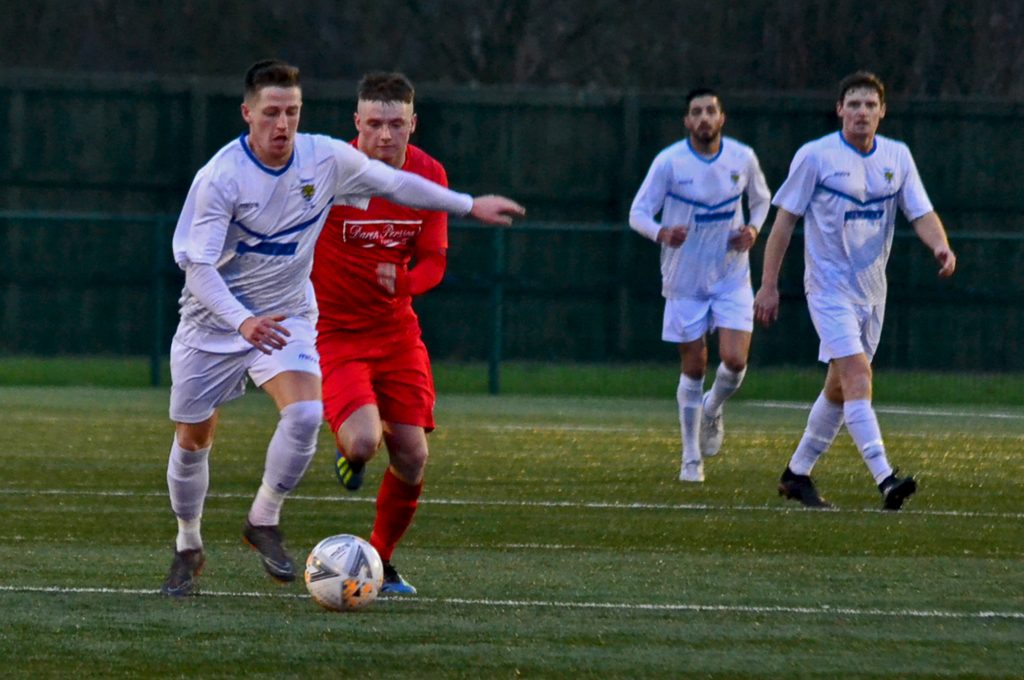 Chris Moore’s side had faltered in their last couple of games, losing at home for the first time the previous week to Hebburn, and dropping two points by conceding two injury-time goals at Bishop Auckland the week before.

But despite being without three big players in Ross Wilkinson, Matty Slocombe and Michael Sweet, they came from behind against a much-improved North Shields side to beat them for the fourth time in this season.

Luke Carr got Consett off to the perfect start after just six minutes, prodding the ball past the advancing Shields keeper Greg Purvis from 12 yards after Danny Craggs picked out his run with a great pass.

Both sides were trying to play good passing football on the ground, and the game was turned on it head as North Shields scored two goals in two minutes.

First, on 14 minutes, Paul Robinson’s classy backheel set Jordan Summerly away, and when a defender missed his low cross, Callum Johnston was at the back post to level the scores.

A minute later the visitors were in front, as Consett gave the ball away in midfield, Shields broke quickly, as Johnston finished with a lovely curling effort into the far corner from outside the box.

Right-back Nick Green was almost Consett’s unlikely hero as the Steelmen responded to falling behind, but his header clipped the top of the bar after Dowson had headed Aksel Juul’s cross back into the danger area.

On 24 minutes Consett were level, and Juul was again the creator. The referee played a good advantage as he was fouled in midfield but recovered to send David Dowson clear. The forward took the ball round the keeper, and though his touch seemed to have taken him too wide, he somehow squeezed it in from an acute angle to make it 2-2.

Two minutes later the Steelmen were back in front, as skipper Danny Craggs despatched a trademark free-kick over the wall and into the corner from 20 yards for his 14th goal of the season after Carr was sent tumbling.

North Shields almost levelled on 37 minutes when their former keeper came to collect the ball and only succeeded in colliding with his own player. Luckily for Consett, Darren Holden spotted the danger and got back superbly to head Robert Taylor’s shot off the line.

Three minutes before half-time Consett got their noses further in front as the visiting defence failed to deal with Dowson’s pass, and Nick Cassidy lashed the ball into the top corner from 25 yards.

In the 75th minute Shields were back in the game with a goal out of nothing. Hayes spilled a left-wing cross and centre-back Curtis Coppen was on hand to tap in from close range and make it 4-3.

Consett had been largely content to sit back and soak up the pressure since the half-time break, but conceding a goal saw them step up a gear and go on the attack again.

Juul fired one shot just wide, and then saw another deflected over the bar after swapping passes with Craggs. But it was his industry which led to the 87th-minute goal which finally put the result beyond doubt.

He intercepted a pass in his own half and switched play with a glorious crossfield ball to Calvin Smith. The midfielder, who edged man of the match honours, rifled the ball into the bottom corner from 18 yards to make it 5-3.

A minute later the scoring was completed after an excellent move involving Smith and Carr saw the ball land at the feet of Danny Craggs, who spotted Purvis off his line and made it 6-3 with a delicious chip from the edge of the box.

It was a fitting end to a fine game of football played in an excellent spirit – there wasn’t a yellow card in the whole game, and the referee played his part by letting the game flow.

A great advert for the Northern League – and a win which kept Consett three points ahead of nearest challengers Dunston.

Sadly, the Steelmen weren’t able to keep it up, and a loss of form after the turn of the year saw them finish fourth – still their best finish in eight years – while Dunston went on to win the title and promotion. North Shields finished 9th.