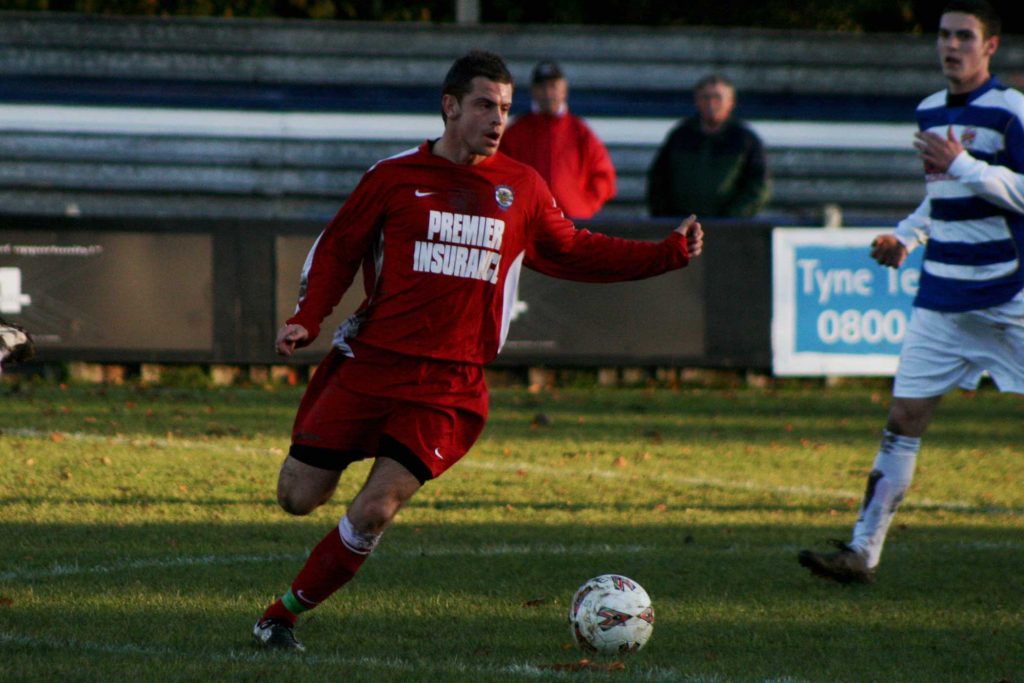 Manager Kenny Lindoe made three changes to the side that had won at Ashington in the previous game two weeks earlier. Skipper Carl Piecha returned after injury in place of the unavailable Paul Collins, while Chris Scott and Gavin Parkin replaced Mattie Moffat, who was carrying a knock, and Steven Johnson, who had departed for pastures new at Shildon.

Consett went close in the opening stages through Parkin and Gary Ormston, so it was against the run of play that the home side took the lead after 10 minutes. A cross from the left was punched out by keeper Daniel Staples but fell at the feet of a Chester player whose shot was deflected onto the post.

The ball rebounded kindly for the league’s top scorer Nathan Fisher – who’d played just one game for Consett at the start of the season before being released – to slam the ball home.

But it only took four minutes for Consett to reply. Andrew Burton played the ball into Gavin Parkin, who turned on the edge of the box. His shot took a deflection off of a defender and looped over the stranded keeper. It was the diminutive striker’s first goal for the club since his transfer from Bishop Auckland.

Consett continued to have the better of things, with Ormston shooting wide from 25 yards and then another Ormston effort was deflected over following a corner.

A minute before the interval Ormston’s head-on set up Chris Scott, whose first-time shot dipped over the keeper but went narrowly wide.

The second half continued in the same vein with Consett on top, and they almost took the lead in the opening minute. Steven Huggins’ cross fell to former Chester midfielder Andy Cuthbertson, whose shot saved at point-blank range by home custodian Carmichael.

Ormston shot narrowly wide five minutes later, but the Steelmen got their noses in front in the 53rd minute. David Pounder’s pass found Cuthbertson in space about 25 yards from goal and the midfielder’s well-struck shot found the bottom corner of the net, beyond the scrambling Carmichael.

Cuthbertson threatened to add another when he cut inside but shot wide after 62 minutes. While at the other end Fisher wasted a good opportunity to level for the Cestrians when he blasted over from a good position following a corner.

Moffat was introduced to the fray with 10 minutes to go, but it was the home side that went dangerously close to levelling the scores with three minutes left when ex-Consett defender Damian Maw headed just wide from a corner.

But the game was made save with a minute left on the clock when Pounder’s superb cross from the right was headed home at the far post by Moffat.

It was Consett’s 9th away win of the season – they would eventually end up with 14, a haul only bettered in their 2005-06 Division Two promotion season. But poor home form, which brought only 5 victories all season, resulted in a disappointing mid-table finish.