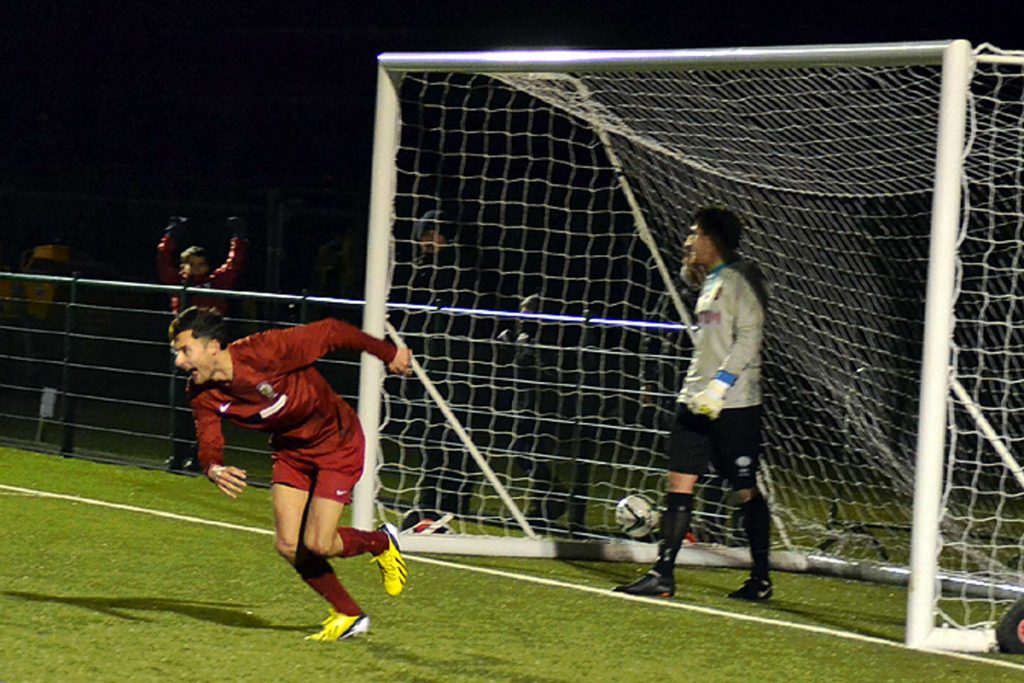 Played in a stiff north wind, it was a credit to both sides that they were able to serve up a game of such high quality to a 548 Friday night crowd. Consett made just one change to the side which had won at Bedlington, with Anthony Lund coming in at left-back for David Brown.

The Steelmen almost got their Northern League debut at their new ground off to a flying start when an excellent pass by Lund sent top scorer Luke Sullivan clear, but the advancing Spennymoor keeper Peter Jeffries saved with his feet. Two minutes later the visitors gave notice of their attacking intent, when home keeper Jack Norton was called upon to make a point-blank save from Spenny’s leading marksman Liam Henderson.

Consett were within a whisker of taking the lead on 16 minutes when a Calvin Smith free-kick was knocked down by Aris Guerin-Lokonga and Michael Mackay thumped the ball goalwards from eight yards. The faintest of touches from Jeffries denied the ex-Hartlepool man, and deflected the ball onto the bar and over.

Lund hit a free-kick well over on 23 minutes, but a minute later the Steelmen were ahead with their first ‘proper’ goal at their new home, and it was fitting that it was Mackay – making his 200th appearance for the club – who should score it. Smith flighted a pinpoint cross from the left, and Mackay found space between two defenders to score with a rare header.

The goal seemed to sting Spennymoor into action, and they enjoyed a good 10-minute spell in which they dominated possession, and created a couple of good chances. First, Norton again saved well from Andrew Johnson, who had been played in by Henderson’s pass. Then the goalkeeper stood up well to deny Andrew Stephenson, who was beginning to cause problems on the wing.

Consett had more chances too: Sullivan hit a firm shot at Jeffries, who fumbled the ball but gathered at the second attempt before any red-shirted players could take advantage, and, a couple of minutes before the break, the No 9 hit a snapshot just wide from 20 yards.

Half-time was reached with the score 1-0 to Consett, but the second 45 minutes was destined to be a difficult one, as the Steelmen were playing into the teeth of a fierce wind.

Norton again came to his side’s rescue just four minutes in, saving from Lewis Dodds, and the excellent Scott Martindale blocked Stephenson’s follow-up. Consett were playing more on the break now, and Sullivan had two good chances to increase their lead in as many minutes. First, he shot wide from just inside the box, then, after a fine pass from Chris Bell, he saw his effort come back off the bar, with Jeffries beaten.

Spennymoor made a double substitution midway through the half, and it almost paid immediate dividends, as Chay Liddle fired just wide from close range from a Stephenson pass. Then Henderson came even closer, hitting the bar with a tremendous strike from 25 yards.

Moors had a big penalty shout turned down by referee Rebecca Welch when the ball struck the underside of Lund’s arm, but it would have been an extremely fortuitous award indeed, as the defender was running away, tracking his man, and made no move towards the ball.

The Consett defence was coming under such pressure that an equaliser looked on the cards, and Norton was again their saviour on 83 minutes when he saved from Dan Taylor, as the forward burst clean through.

But when it came, the next goal fell to Consett, with Sullivan scoring six minutes from time with a stunning 40-yard strike. His presence of mind in not only spotting the keeper off his line, but opting to drill the ball hard and low rather than attemping a chip into the wind was quite brilliant.

The two-goal lead lasted barely a minute, though, as Carl Piecha was harshly judged to have brought down Taylor in the area, and the striker got up to convert the resulting penalty himself.

Taylor then thought he had snatched a dramatic equaliser four minutes into stoppage time, only to be denied by a superb one-handed stop from Consett’s man-of-the-match, Norton, who saved his best game for the club for a fittingly auspicious occasion. As opening games go, the home supporters present couldn’t have asked for more.