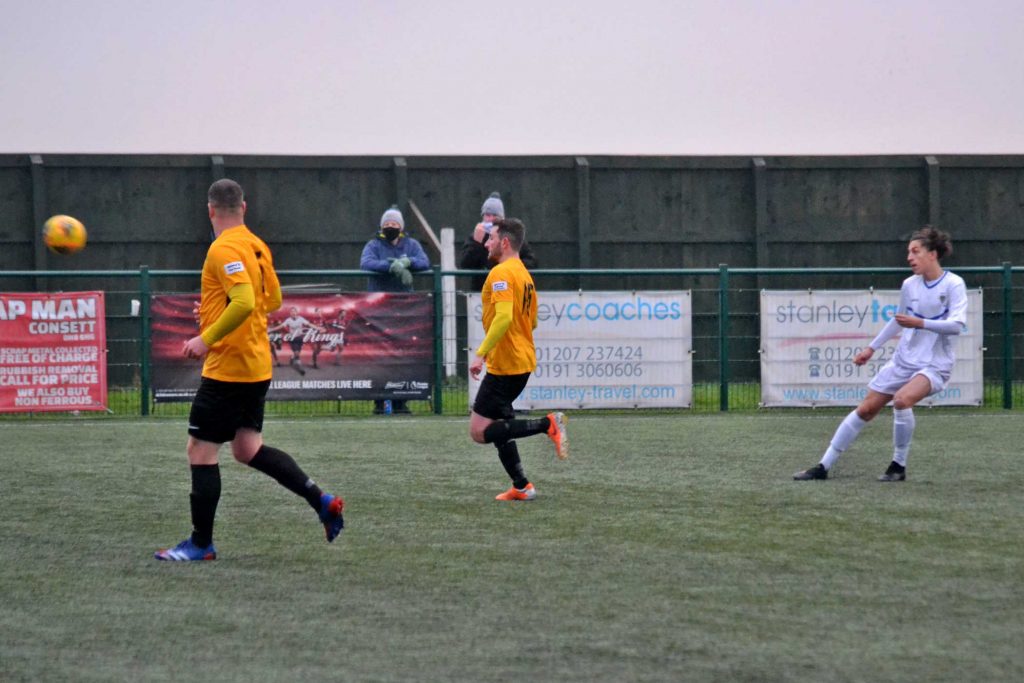 Dan Marriott’s first goal for the club gave Consett a 3-2 win over Crook Town today as the clubs met in a friendly intended to help get players match-fit before the Northern League restart.

And with supporters allowed back into Belle View Stadium, a good crowd was able to see the young midfielder’s superbly-executed 40-yarder, pictured top, which was the difference between the two sides.

Consett manager Terry Mitchell used the game to give his full squad some minutes, with the exception of in-form striker Dale Pearson, who was rested ahead of next week’s FA Vase tie v West Auckland.

The Steelmen took the lead on 13 minutes when Darren Holden played the ball inside to Ali Alshabeeb, who found the far corner from the edge of the box with the help of a deflection.

Crook equalised on the half-hour when Corey Nicholson, who had a spell at Consett a few seasons ago, cut in from the right and his shot beat Kyle Hayes with the help of a huge deflection off Holden.

The visitors almost took the lead four minutes before half-time when Jamie Tumilty hit the post.

But it was Consett who went in 2-1 ahead at the break when Luke Carr’s left-wing corner in added time produced a bit of a scramble, and Calvin Smith fired home.

Consett rang the changes for the second half, making six substitutions, and it was one of the newcomers, Dan Marriott, who scored what turned out t be the winning goal in the 54th minute.

Crook goalkeeper Ronan Makepeace rushed out of his area to beat Jermaine Metz to a through ball, but his headed clearance only went as far as Marriott.

The young midfielder, who has impressed enormously in his performances this season, showed tremendous vision, confidence and technique to lob the ball into the empty net from about 40 yards – the sort of goal Calvin Smith has scored a few of over the years.

To Crook’s credit they responded well, and on 74 minutes they got a goal back when Joey Smith scored with a back-post header from a left-wing cross.

Consett had further chances in the closing stages through Nick Allen, Luke Carr and Matty Cornish, but couldn’t add to the scoreline, and an entertaining, well-contested game finished 3-2.